Videogames as an artform – it’s a concept that has been widely explored throughout the indie videogame scene over the last decade. Innumerable indie games have blurred the boundary between interactive entertainment and artistry through their beautiful art-styles, imaginative gameplay, and fascinating narratives. Beginning with the likes of the cult-classic Braid and widely-respected Journey, through to more modern titles such as Unpacking and GRIS. Videogames have undeniably become recognised as art. So what if that concept was taken a step further? What if an indie videogame told its story through art itself? Not through dialogue or cutscenes, but through the finesse of paint upon a canvas. This is exactly the concept of Behind the Frame – The Finest Scenery, a narrative-driven artistic puzzle game developed by Taiwan-based Silver Lining Studio and published by Akupara Games & Akatsuki Taiwan. Conveying a heart-warming story quite literally through the gentle strokes of a paintbrush, this aesthetically-pleasing, emotive adventure aims to satisfy any believer of games as an artform. Now available on PlayStation 4 and Nintendo Switch in the expanded console release, there’s no better time to pick up a controller and experience what lies Behind the Frame.

Unravelling the tale of two budding artists and the kindling of their relationship, Behind the Frame’s story is charming, heart-warming, and emotive throughout its entirety. Told from the perspective of a young female artist and her cluttered apartment, her fascination for her neighbour and his fondness for painting becomes the story’s key focus. As her relationship grows and blossoms through a love of painting, the game uses these very paintings to explore the motivations behind each of these loveable characters. 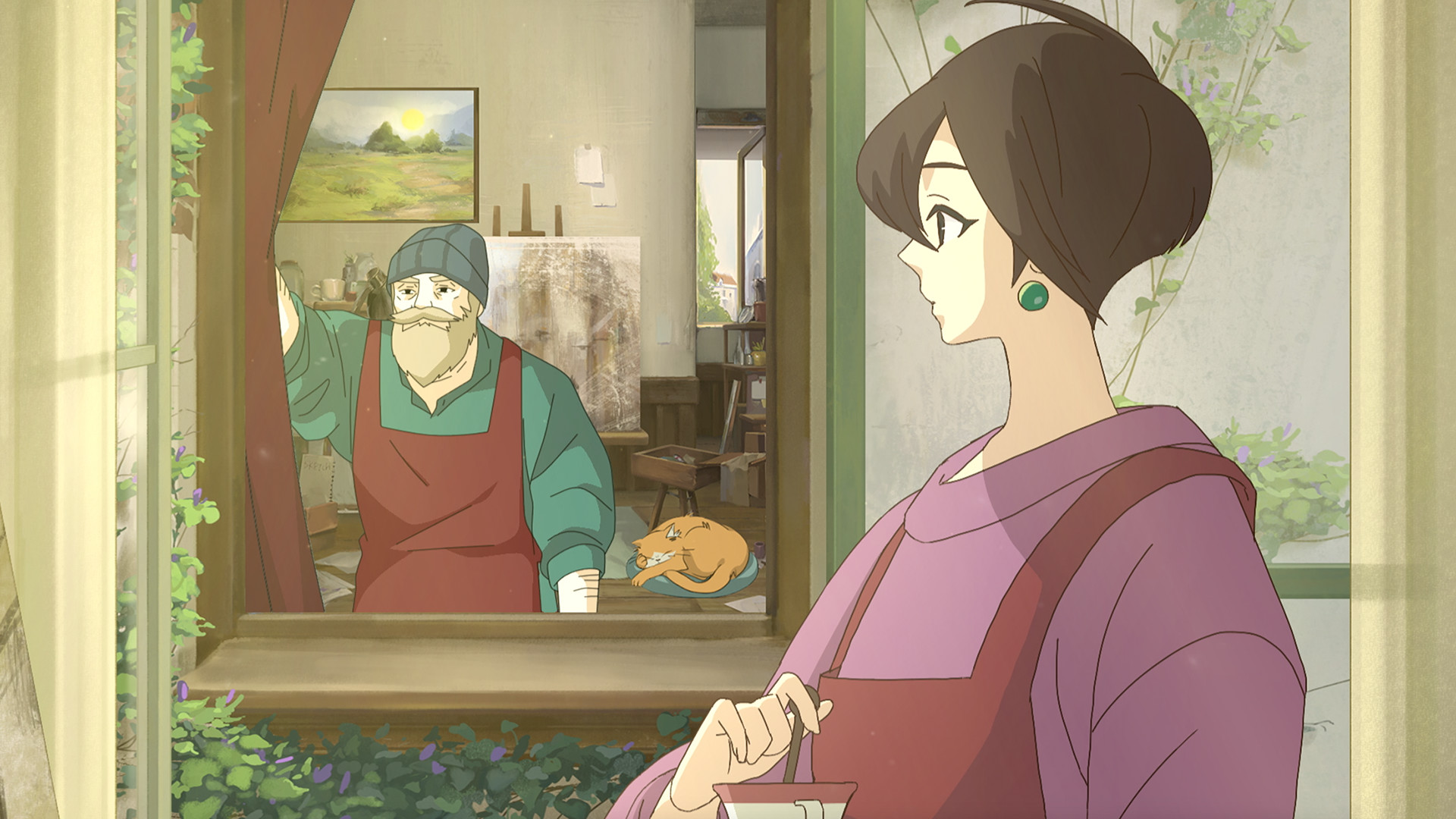 The main character and her neighbour, who she only ever observes through a window.

While most games would tell a story simply through character dialogue or text, this game cleverly utilises environmental and contextual storytelling for its small amount of dialogue to deliver a compelling impact on the player. Though lasting no longer than a feature film, Behind the Frame effectively weaves intricate relationships, engaging backstories, and character quirks into its concise narrative. Players will experience a range of emotions through its short but stunningly well-crafted story.

Cleverly incorporated into the game’s story, gameplay is minimalist and approachable, acting as more of a means of interacting with the game’s surroundings. While simply playing like most point and click puzzle games, Behind the Frame does so with art at its core, as the player must complete paintings with certain colours in order to advance the story. Conveniently, colours of paints are scattered throughout the main character’s apartment, hidden away behind puzzles for the player to solve and piece together. Most of these puzzles are quite simple and are easy enough for any player to enjoy without the answer being glaringly obvious. Guess we could all use a bit more yellow paint in our lives.

The remainder of Behind the Frame’s gameplay is presented through paintings – not only creating them, but exploring them. New paint colours unlocked during each segment of gameplay are applied to the canvas, eventually creating beautiful scenery that tells its own part of the story. As the game progresses, the player is then given the opportunity to become fully immersed by these paintings, surrounded entirely and exploring elements within their depictions. These segments are truly beautiful, and highlight the game’s biggest asset: stunning visuals. Being a game entirely about art, Behind the Frame superbly represents this through its gorgeous aesthetic. With an art-style and animation clearly inspired by the likes of Japanese animation film studio, Studio Ghibli, and paintings that ooze impressionist style, the entire game is a visual delight. Exploring environments is akin to viewing a 360 degree image, as the camera warps and shifts slightly at certain angles, which seems to work incredibly well during segments where the player is immersed in the world of its paintings.

You’d be easily mistaken for thinking this was the next Ghibli film.

Even regular sections of the game are made delightfully adorable thanks to its wonderful art-style, which fans of animation and art games will truly appreciate. Playing the PlayStation 4 version of the game on a PlayStation 5 console, the game runs at 4K and colours appear as vibrant as a painting when playing on an OLED screen. Although relatively short, the game’s style kept me pausing frequently to take screenshots and footage of its wallpaper-worthy scenery. 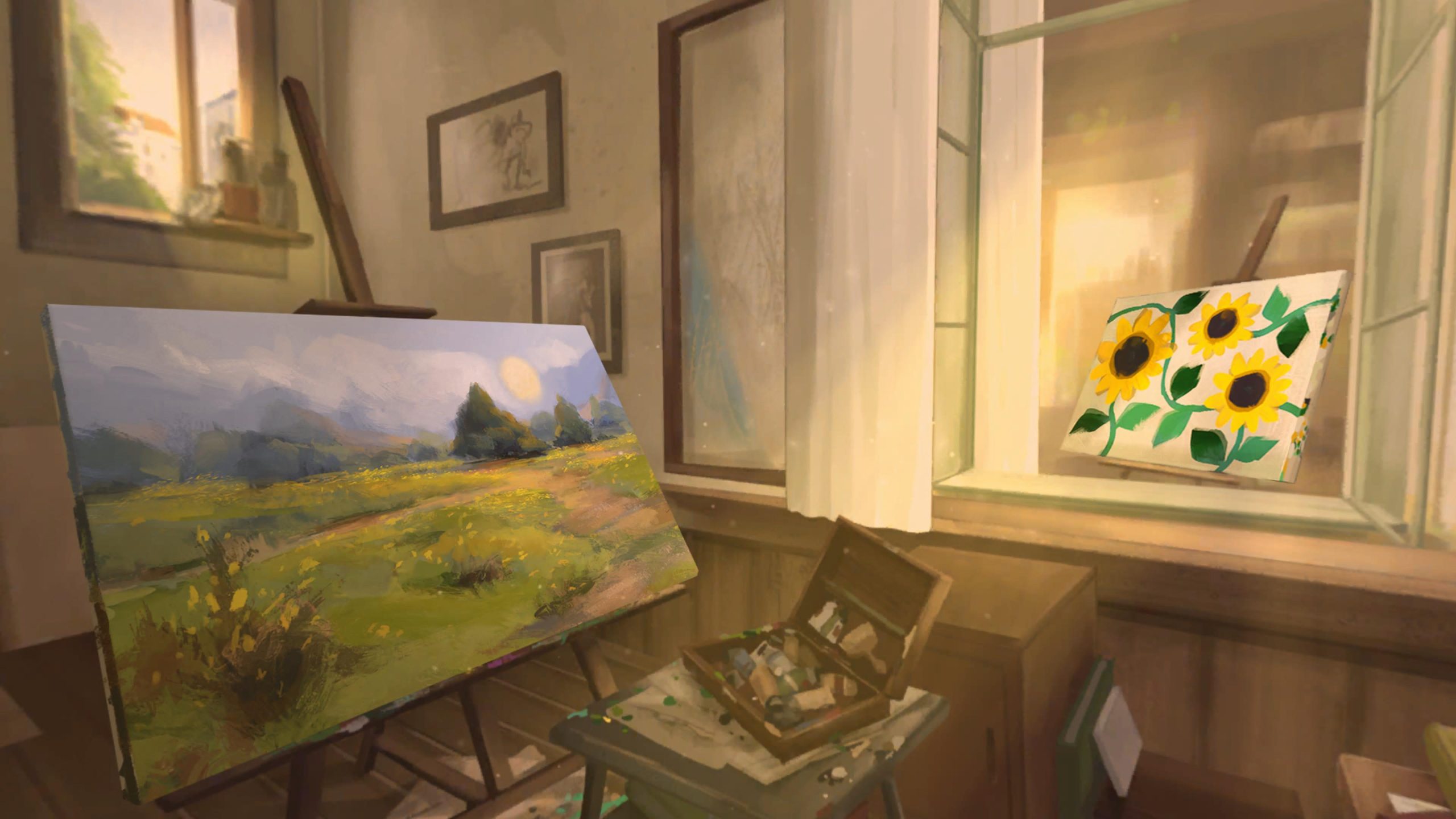 With such an impressive visual style, Behind the Frame’s audio has a lot to contend with. Thankfully its composer, Yuchain Wang, has created a soundtrack that acts as a perfect accompaniment and greatly enhances the player’s experience. Music tracks are specifically made to match the mood of each scene, ranging from chill and relaxing lounge jazz through to sombre solo piano. Take a listen to the game’s full soundtrack here or these tracks below for a snapshot of its music:

This delightfully jaunty swing jazz piece plays while on the hunt for a mischievous cat.

Aside from music and ambient background noise, there’s not an awful lot else to Behind the Frame’s audio aside from sound effects, as voiced dialogue is limited to short audio snippets. Sound effects thankfully are appropriately placed and unobtrusive to the calming nature of the game, like the sounds of a brush sweeping across a canvas, or the meow of the cheeky cat that just stepped in the paint.

Once the main story is completed, players will be treated to a shorter post-game segment that offers an expanded story from a differing perspective. Though this is shorter than the main game, it’s still just as worth playing and delivers insightful character development (and more cute cats). There’s otherwise not a whole lot of replay value to Behind the Frame, as the game offers no additional gameplay beyond its story mode. Something along the lines of a concept art gallery or means of interacting more freely with each of the environments would have been a nice touch as a bonus feature.

Where many indie games seek to be artistic and meaningful, Behind the Frame delivers exactly that in a concise experience that can be fully enjoyed in just a single sitting. Some modern titles may require in excess of a hundred hours to portray a meaningful story, but Silver Lining Studio have achieved this in a fraction of the time without sacrificing on impact. Through its combination of stunningly artistic visuals and creative environmental storytelling, this is a beautiful experience that further proves videogames’ potential as an interactive artform. If you’re short on time and hoping to experience a game that will bring you to tears, simply look Behind the Frame.

A review copy of Behind the Frame: The Finest Scenery on PlayStation 4 was provided for the purpose of this review.
The game was played and footage captured on PlayStation 5.

If you're looking for a beautiful game, it's time you looked Behind the Frame.