A racer where if you can make it past the tutorial, maybe you’ll stand a chance. Find out why in our RedOut 2 review.

The first Steam review I saw for RedOut 2 stated that they couldn’t make it past the tutorial. Without saying a word about anything else pertaining to the game, whether it be mechanics, graphics, or anything else, that’s the only impression left upon that player. Some more scrolling, and I saw it wasn’t just them – several others couldn’t make progress in RedOut 2 because they failed the tutorial. Racing fans of old may recall 1999’s Driver having a similar beginner struggle, requiring the player to do tons of stunts in a brief time limit to pass level one. Let’s go in-depth with RedOut 2 past this contentious point, though, and take a look at this chaotic high-speed racer that will entice fans of F-Zero and Wipeout. You’re locked in to the second easiest difficulty upon starting RedOut II, but make no mistake – the game is as tough as racers get.

The presentation within RedOut 2 is nothing short of stellar, easily the high point of the game. A smooth cutscene-to-gameplay transition after booting up RedOut II for the first time makes for succinct immersion and a large wow-factor for the sights you’ll see as the high-fps racer masterfully utilizes motion blur to show you just how fast your 2000kmph vehicle is going. It stinks that there’s some stuttering even on a modest machine at 1080p on a SSD, as you can’t afford to miss a single frame in a game like this, but it was stable for the most part during races. 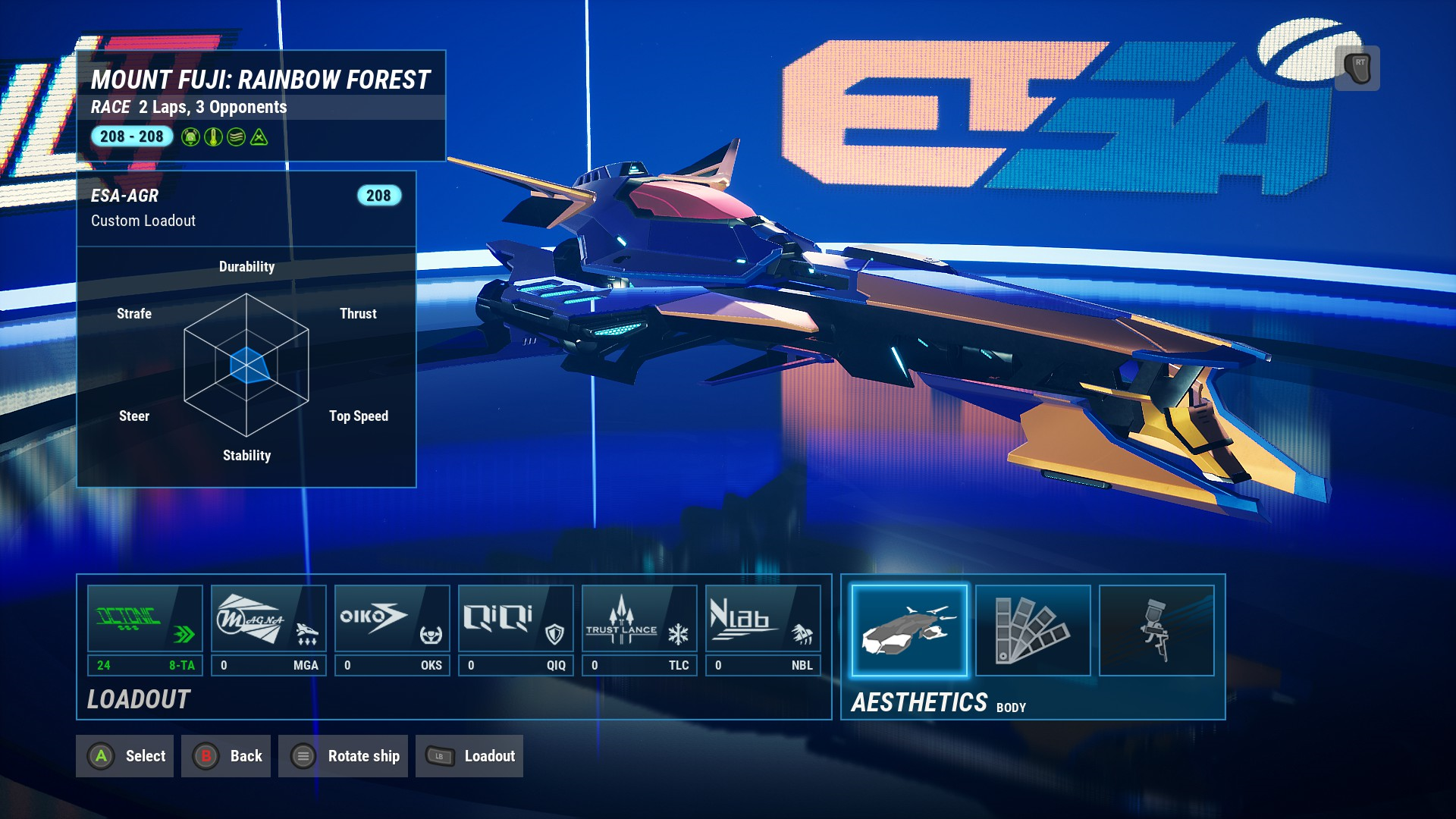 Decking out your ride is extensive and necessary if you want to keep up with your opponents in RedOut II.

Whether it’s cherry blossom petals in a Japan course or somewhere off the grounds of Earth, there’s tons of tracks to conquer and sights to see all the while. Visual indicators are placed well-enough to warn you of upcoming turns and gravity dips/dives. This is surely 34BigThings‘ strong suit, and a nice leap from RedOut‘s visuals.

I bet you’re wondering at this point – “Why can’t people beat the tutorial?” Well, the answer is a mix of RedOut II‘s controls, its demands for the player, and its artificial difficulty. While the control scheme is manageable, turning feels like absolute crap. In microseconds, you’ll either turn too sharply or hit the far wall almost 100% of the time. It’s a travesty for a game with such an emphasis on speed. Braking to make a turn is out of the question, as the AI is always set to make the turn without slowing down, meaning you’ll fall behind and lose. This is problematic as you’re generally required to make 1st place to get enough stars to advance and win upgrades. If someone is to “git gud” at RedOut II, it’s solely thanks to bending to the whims of the atrocious controls that are imposed upon the player. F-Zero and Wipeout Omega Collection both have tight turning controls, so there’s no excuse for RedOut II to fall behind. You’re bound to lose in RedOut II, but it still feels great to scratch and claw your way to the 1st position.

When you’re not worrying about the next turn, you’re going to be boosting like your life depends on it. The boosting tutorial was actually one I ended up failing as it requires you to be boosting the majority of the time. Unfortunately, if you boost for too long, you’ll run out of health and wreck, a la Star Wars Episode 1: Racer. Balancing your boost with your health is tolerable until you see AI pass you with seemingly unlimited boosting on the straightaways. The odds are always stacked against you in RedOut II and it’ll take tons of practice to truly go toe-to-toe with these overpowered computers – it’s just a matter of if the player wants to put themselves through that.

With a blazing-fast race car in the future, you’re going in with expectations of grandiose vibrations into your eardrums. Thankfully, RedOut II delivers here, just as they did with the visuals. With my vibrating-bass Razer Nari in tow, I felt the rush of going about 10x faster than my car ever could. This is backed by a thumping-bass electronic soundtrack that fits like a glove with the utopian setting of any given track I could be racing on – take a listen to one of the tracks as an example:

The exhilarating dark techno beats of “Larsen” by Matteo Tura.

Additionally, hearing a crack every time I ran into a wall (a lot) felt like a punch to the gut. It also helps having an audible indicator when my health ran low during a particularly long boost, letting me know to back off and let the health come back. If the gameplay held up as well as the audio/visuals, RedOut II would be a gem.

There’s quite a difference between loading up a friendly 50cc Mario Kart 8 race and zooming into a RedOut II 2000kmph free-for-all with no room for error. Whether you’re good at it or not, RedOut II can get your blood pumping and serves to immerse you well. If you don’t mind struggling, losing, and not feeling yourself improve at the game, RedOut II is definitely not for you. But if you’re willing to dedicate your time to master it, there’s a lot of content in RedOut II to conquer. It’s sitting at a “Mostly Positive” on Steam at the time of writing, eluding a “Very Positive” thanks to its difficulty but having enough polish and modes to hit “Mixed”. Let’s break down if RedOut II is for you or not below!

A press key for RedOut II was provided courtesy of the publisher. Enjoyed our RedOut II review? You can read more of our reviews here.

The closest you'll get to F-Zero or Wipeout on modern systems, with a real challenge to boot, RedOut II is a racing game that isn't going to be for everyone.