The ’90s were an interesting time for handheld gaming, with portable technology in its infancy and only just beginning to take off. Nintendo’s star child, the GameBoy, was truly dominating the market. Sega was the direct opposition with the Game Gear, boasting both a colour screen and a blue hedgehog. Various other less popular handhelds tried to squeeze into the market to take on these two giants only to result in failure.

At the same time, the 90s were also an era where arcade gaming was beginning to die off. Why? The recent invention of home consoles, now becoming easily accessible. Where you once had to go to a local arcade to play a multiplayer game with friends, instead you could now play that exact game at home without the need to feed coins into a bottomless pit.

With a rise in popularity of console gaming, arcades began to face extinction.

So naturally in such a turbulent market, companies had to adapt to these changing times. One of the most notable companies was Shin Nihon Kikaku, who we more commonly know as SNK. Originally developing and releasing arcade games, SNK saw the growing home console market and began to develop ports of their popular arcade games and brand new games for the Nintendo Entertainment System.

Intent on bringing the arcade experience into people’s homes, SNK released the NEOGEO: Advanced Entertainment System (AES), which had graphics and quality similar to that of an arcade machine but was available for purchase to the public and had interchangeable game cartridges. Iconic ’90s series like Fatal Fury, Metal Slug, Samurai Shodown and King of Fighters all featured on the NEOGEO console. Although SNK had succeeded in bringing arcade games into the home, this was no match for the portability and versatility of handheld game consoles like the GameBoy. So SNK decided to shrink the arcade cabinet even further and created their very own handheld: the Neo Geo Pocket. 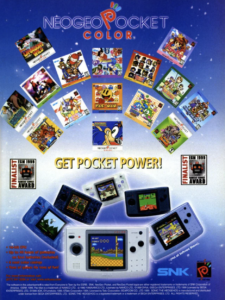 Released in 1998 and discontinued the following year, the console was deemed a commercial failure, sometimes referred to as one of the worst-selling handhelds of all-time. With only 10 games available for the console, the original Neo Geo Pocket was almost immediately superseded by the superior Neo Geo Pocket Color, which was to take on the newly-released GameBoy Color. Closely inspired by its predecessor, the Color had (you guessed it) a colour screen, an eight-direction D-pad, and a horizontal design like that of the Sega Game Gear.

Immediately, the Color was received better than the original. Launching alongside 14 games and a bargain RRP of $69.95USD, the console was successful enough to turn a profit outside of Japan and secure a small portion of the handheld market. The console even managed to gain support from several third-party developers, with games like Sonic the Hedgehog, Puzzle Bobble and Pac-Man appearing on the system. We’ll discuss some more of the standout Neo Geo Pocket games below!

Where many other handhelds at the time focused on a blocky appearance, notably the hugely popular GameBoy, the Neo Geo Pocket instead opted for a comfortable design with a distinct aesthetic. Rather than being held vertically, the Neo Geo Pocket took upon a landscape design, which might seem familiar if you’ve ever used an original GameBoy Advance. The console was almost immediately superseded by the Neo Geo Pocket Color – both featured almost identical designs, but added a striking colour display to compete with the GameBoy Color. The landscape design with rounded corners made for comfortable handheld gaming.

Created specifically with SNK’s library of arcade games in mind, the Neo Geo Pocket was one of the first handhelds ever created to completely lack a traditional four-direction d-pad, which at the time was a staple of handheld gaming. Instead, a satisfyingly clicky eight-directional stick was developed, specifically suited to arcade-style games. This felt absolutely perfect for its library of fighting games, and in my opinion still holds up as an impressive piece of handheld tech. You really do have to try it out for yourself. The click stick! Easily one of the best directional pads to feature on a handheld.

Combined with an impressively long battery life of 40 hours on 2 x AAs even with a quality colour display, the Neo Geo Pocket Color showed true potential as a quality handheld console in a market dominated by Sega and Nintendo. Despite falling into a particular niche of handhelds that is often overlooked, the Neo Geo Pocket Color managed to fill the space in between the Gameboy/Gameboy Colour and the Gameboy Advance. Though the console was short-lived and its library still small with only 80 games across all regions, many of its games were of a surprisingly high-quality and quite impressive for the time. You’ve probably already heard of many of its most notable games, like Samurai Shodown and Card Fighters Clash, some of which originated on the handheld and still receive attention from retro enthusiasts to this day.

This is without a doubt the most recognisable title on the Neo Geo Pocket – an exclusive that has not only gained favour among retro collectors, but has received recent popularity thanks to a port on Nintendo Switch! Stepping away from traditional fighting gameplay, this handheld title focuses entirely on card battles. Cards go head-to-head and are assigned stats and special abilities! With over 300 cards to collect across both versions of the game, players can battle SNK icons against legendary CAPCOM characters like Mega Man, Ryu, and Chun-Li.  With charming colour art and a heap of replayability, Card Fighters Clash still holds up incredibly well and proves the lasting legacy of the Neo Geo Pocket. This was soon followed up by a sequel, Metal Slug 2nd Mission (pictured below), which featured a brand new campaign and 34 levels in total. This also included an additional playable character and access to the Slug Sub, a new Metal Slug allowing for underwater missions. So grab that *HEAVY MACHINE GUN* and get blasting!

One of the colourful Neo Geo Pocket cartridges.

Another arcade fighting game staple from SNK, King of Fighters made its debut in 1994 in arcades and living rooms across the world. Four years later, the first handheld spin-off, King of Fighters R1 (Round 1) would make its way to the Neo Geo Pocket with a total of 20 playable characters and stylised chibi art. With the game’s popularity, a sequel was quickly produced the following year in King of Fighters R2. Much like the first game, it featured a roster of characters from the KoF series but now expanded to 25 with the added ability for players to create their own fighter from scratch to play through the game’s story mode. The added “Making Mode” gave players the ability to create their own character.

This was also a popular multi-player title for the console, as with the use of a Neo Geo Pocket Link Cable, players could face off against one another on the go. It’s certainly a neat piece of handheld fighting game history!

Released only in Japan until recently, Rockman (or Mega Man) Battle & Fighters was only earlier this year released to a worldwide audience on Nintendo Switch. This once Neo Geo Pocket exclusive took characters from across Capcom’s popular Mega Man series and compressed them into a handheld fighting game.

Drawing its inspiration and gameplay from two arcade games (Rockman: The Power Battle & Rockman 2: The Power Fighters), these games were essentially ported to the handheld. This resulted in a total of 43 characters from across the series, 18 Robot Master bosses, and 7 main characters: Rockman, Blues, Forte, Duo, Roll, Dr. Wily and Dr. Right. An impressive amount of content for a handheld port!

Lastly, it just wouldn’t be a handheld without some sort of Sonic game. Quite possibly one of the most interesting games in the Sonic series too, as it’s not developed by SEGA, but by SNK themselves! The team at SNK took on the task of creating their very own Sonic game, with series creator Yuji Naka overseeing the process along with his Sonic Team. 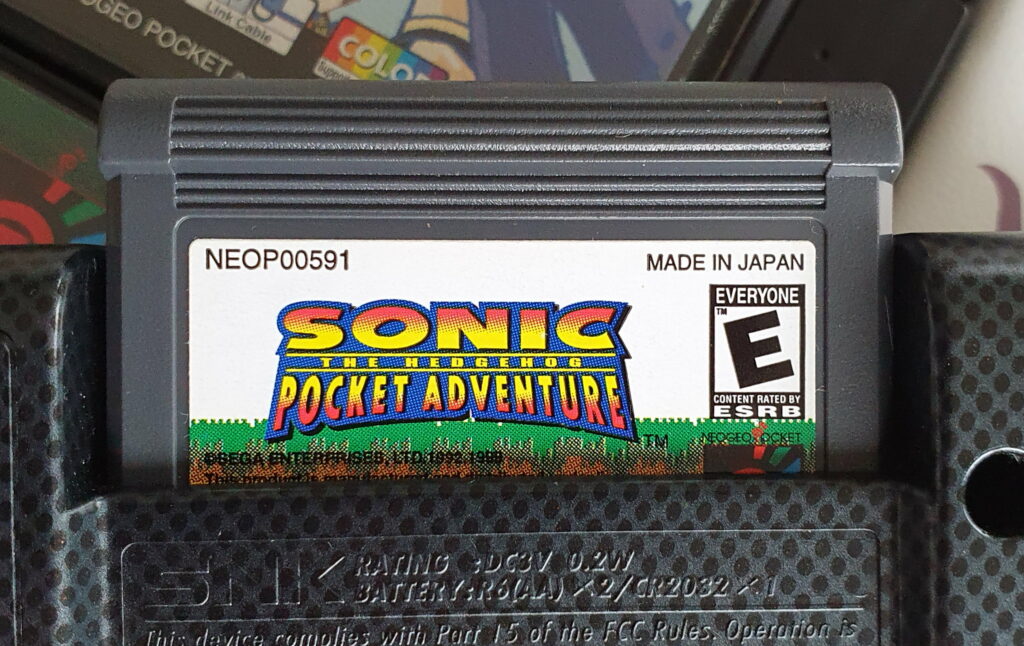 The end result was a fast-paced handheld Sonic game that took the majority of its inspiration from Sonic the Hedgehog 2, but adapted entirely from the ground up for the Neo Geo Pocket. The game featured previously unreleased modes like a Time Trial, bonus stages and content borrowed from other games, and even competitive two-player utilising the Neo Geo Pocket Link Cable to see which player can finish the level first!

The game is not only widely praised among Neo Geo enthusiasts, but also fans of the Sonic series, and is a testament to the impressive effort from SNK developing their very own Sonic game under the watchful eye of the original creators.

So that’s it for the Neo Geo Pocket! The little handheld from SNK that’s sadly all but forgotten. Although it couldn’t complete with the titans of the handheld market and was commercially dominated by the GameBoy, this innovative and impressive piece of retro history lives on through the legacy of its software and the numerous ports now appearing on Nintendo Switch. So if you have any fond memories of the Neo Geo, or even want to start your own collection, be sure to share it with us on our socials!