Discover some of the finest games on two screens in our detailed guide of the Nintendo DS hidden gems you may not have uncovered.

There’s no doubt that the Nintendo DS is a special console for many of us, boasting an impressive library of creative games unlike any other console to date. You’ve probably played through its most popular casual titles like Nintendogs or New Super Mario Bros., iconic Pokémon entries like Diamond/Pearl and HeartGold/SoulSilver, or even RPG cult classics like The World Ends With You. But with such a huge library of excellent first-party titles and successful handheld hits, it can be easy to overlook some of the more niche, underappreciated games available on the Nintendo DS. There are literally hundreds of games worth playing on Nintendo DS. I should know, I’ve played them!

In this article, we’ll focus on those games, and help you unearth some real hidden gems on the console. Games that you (probably) haven’t played, or maybe haven’t even heard of. And even better, these games are still affordable! With the retro market booming, it can be tough to afford the most sought-after titles, so instead, we’ll highlight the brilliant games that thankfully won’t hurt your pocket. To explore more of these, be sure to go check out our Instagram, where we often discuss niche Nintendo DS games.

So which precious gems make the cut? Let’s uncover the first hidden gem on our list…

Grasshopper Manufacture. Maybe you’ve heard of them? A Japanese game studio founded by acclaimed director “Suda 51“, responsible for series like No More Heroes, Killer7 and vulgar games like Shadows of the Damned and Lollipop Chainsaw.

But did you know they also made a quirky JRPG on the DS, which has very similar vibes to Earthbound? Well that’s Contact, and it’s one of the most underrated games I’ve ever come across. The title is an action RPG, and full of odd humour, exploration, plenty of collectibles and items, costumes that give you unique abilities, and an excellent real-time combat system. I’ve not played another game quite like it and only bought it on a whim after finding it for very cheap.

I seriously loved this game and consider it one of the best games on the console, yet few people have played it. Sadly it suffered from poor sales partially due to being released at the same time as Mother 3, but it’s a sleeper hit! Might & Magic! No doubt you’ve heard of it, it’s such an iconic RPG series! Might & Magic has been around since 1984 and is best known for the “Heroes of Might & Magic”, a brilliant tactical turn-based strategy.

But did you know the series also had a game on the DS? Clash of Heroes is unlike any other Might & Magic game. In fact it’s more of a puzzle RPG, and one of the best of its genre. Combining elements of role-playing, high fantasy and puzzle games, you play as one of 5 factions throughout the campaign and undertake missions that utilise units aligned to a vertical grid. Definitely an underrated title on the DS and worthy of a spot in your collection.

Don’t own a Nintendo DS but still want to try it out? Well, you’re in luck, because it’s been ported to PC as well. Lunar Knights for the Nintendo DS is actually the fourth title in the series, which rely on the use of a sunlight sensor to influence certain aspects of the game. If you played Lunar Knights with one of the previous games inserted, you could even use the GBA cartridge’s sunlight sensor in-game!

You play as two characters each with a unique array of weapons and skills, and progress through a series of levels with a story focused around vampire hunters with a strange mix of Sci-fi and Western elements. The gameplay is thrilling, has a mix of exploration/puzzles/combat, controls well, and even features some shoot ’em up stages in between. It’s quite an impressive game!

I also had a lot of fun with the multiplayer mode, which allows you to face off against a friend in PVP. It’s such a gem and wish more people know of it. As they say, imitation is the highest form of flattery. And that’s certainly the case for Scurge: Hive, the best Metroid game you’ve never played! This entire game is unashamedly 100% a Metroid rip-off, and somehow manages this incredibly well.

Playing as a top-down isometric Sci-fi action RPG, you explore an alien planet as a female bounty hunter, Jenosa, tasked with the elimination of a parasitic lifeform known as the “Scurge”. Let me repeat that: female bounty hunter, parasitic alien species. Sound familiar? But don’t be fooled in thinking this game is just a cheap copy. It’s honestly a great game on its own and 100% worth playing if you’re a fan of the Metroid series!

Fun fact, the game’s composer is also none other than Jake Kaufman! Who is know renowned for his incredible work on Shovel Knight and the Shantae series. So at a bargain bin price of only $20, you’d be mad not to give Scurge: Hive a shot. 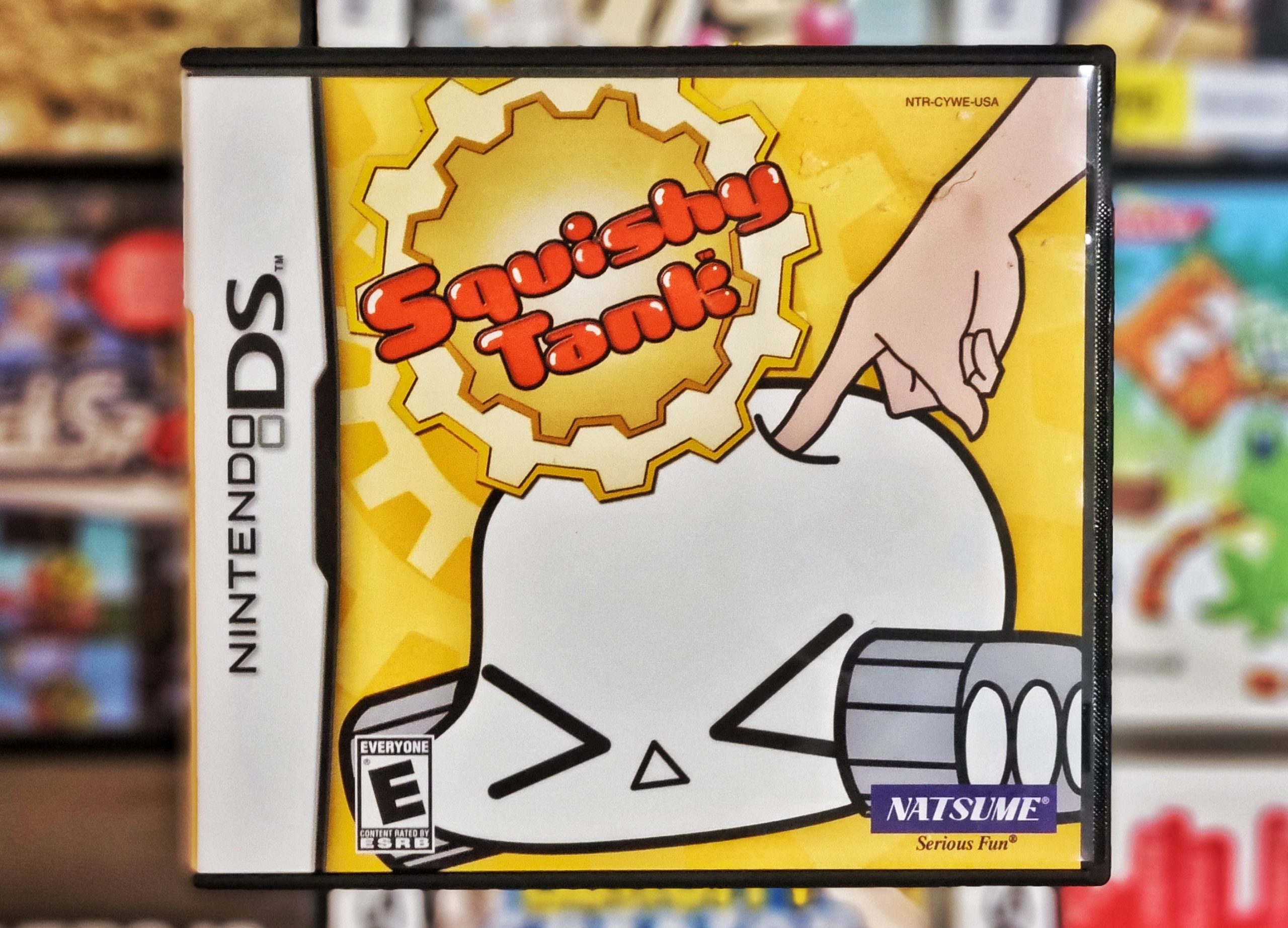 Wait, a Match-3 game (think Bejewelled) deserves a place on the list as a hidden gem? Well, believe me, Squishy Tank is no regular Match-3 game. While Squishy Tank does feature pretty standard gameplay that you’d expect from the genre, its unique humour, adorable art style, and pop-culture references make it absolutely worth having in your handheld library.

The entire game focuses on adorable tanks who have been sent into warfare but are terrified and just want to have a good time. Each tank has a different cutesy design and various costumes can be unlocked over the course of the game. Probably the best thing is the huge amount of references to pop culture and other games. My favourite is a sequence where the Squishy Tank finds a cardboard box and decides to try stealth instead! One of the most unusual titles on the DS. Not only does C.O.P. not stand for “cop” as in police, but it’s actually a spin-off of Driver: Parallel Lines despite not advertising its connection to the series. This gritty, action-packed shooter is about as ambitious as DS games come, and this is exactly why it deserves a spot as a Nintendo DS hidden gem.

Players assume the role of Dan Miles, a former street racer who is recruited into the “Criminal Overturn Program” (COP) to take down crime in New York City. His job eventually gets him involved in a crime syndicate planning a terrorist attack on the city. It’s half third person shooter and half open-world driving game, really pushing the DS to its limits. It does neither exceptionally well, but overall is an impressive technical feat for the console. The final Nintendo DS hidden gem is the best Dragon Quest game ever made!

Seriously one of the best monster-battling games you’ll ever encounter, and a refreshing change from the Pokémon formula. You take control of “Joker” (no, not the Persona guy), on a quest to win the “Monster Scouting Tournament” by collecting monsters from across a tropical island paradise.

Throughout the game you go on a quest to scout monsters and recruit them for your team, and along the way discover secrets about the island where the game is set. The cel-shaded graphics work incredibly well on the DS, and the monster capturing and 3v3 battling gameplay is incredibly rewarding and becomes increasingly challenging as you progress through the game.

In total there are 200 monsters to recruit, all the way from the iconic Slime to all the way up to monsters that appear as bosses on previous games! It’s an RPG-fan’s delight and easily one of the best games on the DS, which is why it takes the final spot as a hidden gem.

Did your favourite Nintendo DS hidden gem make the cut? If not, reach out and share them with us on Facebook, Instagram, or Twitter! If you enjoyed reading this, be sure to also check out our other retrospective articles here.