Last year I was given the opportunity to review the Alienware m15 R6, one of the most powerful gaming laptops on the market at the time. Providing a sleek, portable and compact high-end gaming experience, Alienware crafted a device that was not only technically-impressive, but made excellent use of its limited size. For many gamers on the go, portability is vital, and understandably technology is constantly changing to meet with this growing consumer demand. But what if portability, size, and weight were all factors that didn’t matter at all? What if you could instead create the most powerful computing experience with no compromise or limit when it came to an ergonomic or compact design? This is exactly what Alienware have achieved in their newest set of flagship gaming desktop units: the Aurora R13. Sporting a futuristic tower that stands taller than a PlayStation 5, and a case absolutely packed full of the most high-end parts like the GeForce RTX 3090, this is a no holds barred, uncompromised, ultimate PC gaming experience. So for those of you out there reluctant to build your own desktops or modify your existing rig, how does the Aurora R13 stack up as a pre-built high-end gaming desktop experience? Read ahead to find out more.

Living up to the brand’s name, the Aurora sports an aesthetic akin to a futuristic alien spacecraft, choosing an oddly-shaped elongated cylinder standing over half a metre tall for its design. With its mesh framework at the front, strips of customisable RGB lighting, and a clear viewing window on the side of the unit, you’d be forgiven from thinking that this PC had been developed on another planet and accidentally left on Earth. It’s a unique and eye-catching design unlike other more blocky, ergonomic PCs. 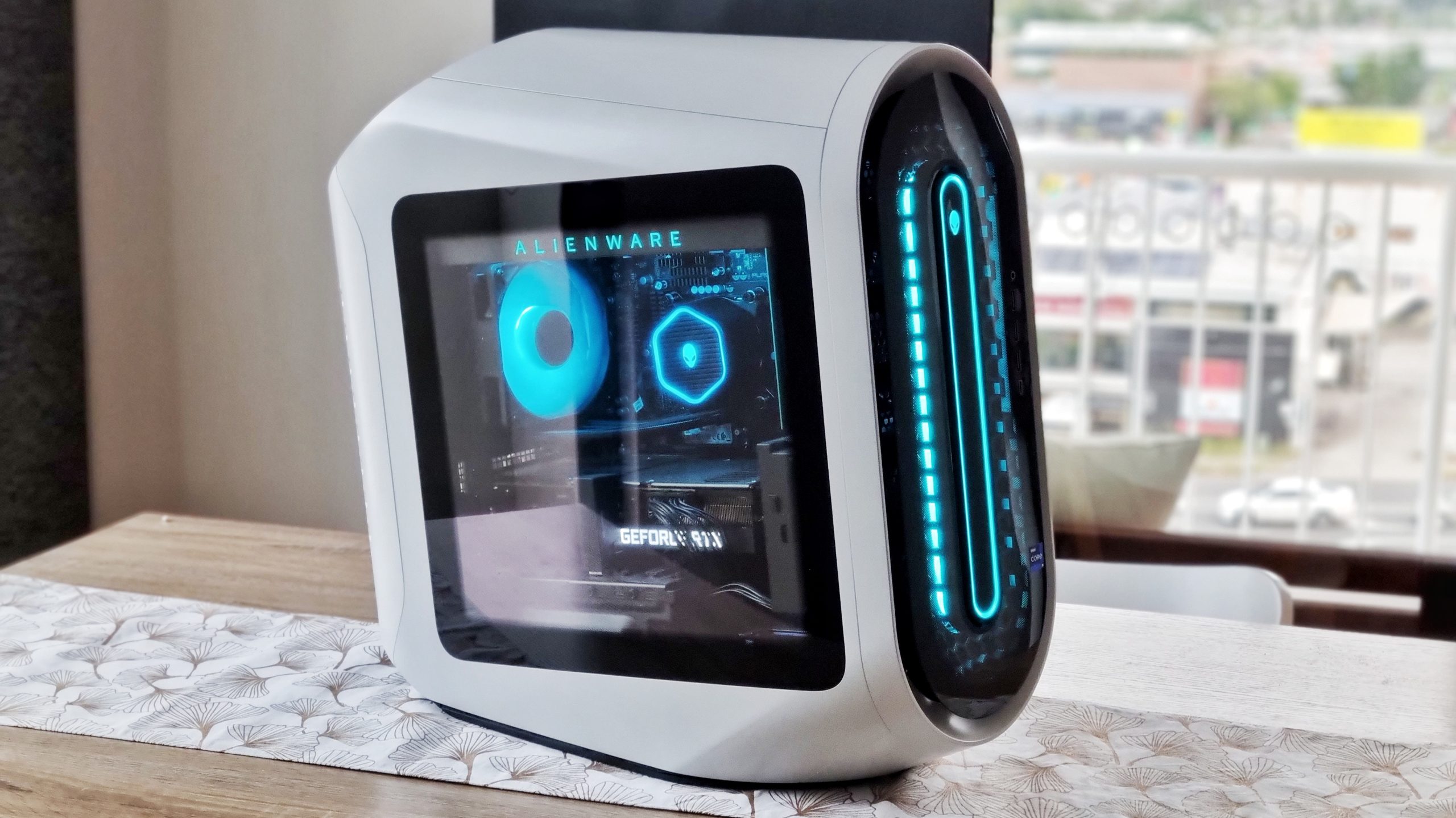 The tempered glass viewing window allows the user to gaze longingly into the computer’s heart and soul, lit by the attractive glow of RGB lighting of the liquid cooling which is emblazoned with the Alienware logo. It’s fascinating to be able to see every single component arranged neatly, even if the RAM installed appears to be very no-frills unlike the remainder of the unit. During my time with the R13, I did also begin to see dust accumulating on its hexagonal mesh at the front – some of this could be removed with pressurised air, but there’s no easy way to keep this area dust-free. At the rear of the tower, an optional hex-mesh cable cover can be attached & detached within seconds using a series of small magnets. This cover simply serves an aesthetic function, as it adds to the bulk of the unit but can help cleverly hide a network of cords plugged into the PC’s plethora of ports. Removing this can be done immediately and is a nice touch for gamers who want their setup to look as sleek as possible. No doubt this is a PC with a design that will turn heads.

So it looks pretty, but how does this attractive design compare to its practicality? Well, if you’re seeking a PC that’s portable, compact, and ergonomic, this is not the computer you’re looking for. The Aurora R13 is a chonky boy – a towering case that takes up a significant amount of space and has a hefty weight to match. Standing at half a metre tall, 59cm long with the cover on, and up to 16.5kg depending on the choice of components, this is not a unit you’re going to want to move once set up. Honestly, if you’re not particularly confident carrying heavy weights made up of expensive technology, I’d recommend getting a trustworthy friend to help lift this absolute unit. It wouldn’t be Alienware without a generous helping of RGB lighting.

Though if we’re talking practicality as a PC, the Aurora has pretty much everything covered. On the rear of the unit are ports aplenty, with pretty much every input you would ever want and multiple of each. In addition to three display ports and one HDMI, there are EIGHT USB ports (2x USB-C) on the rear and another 4 USB ports on the front of the case. I’m not sure I’d ever need to plug that many accessories into the PC at once, but if you’re loaded with external hard-drives, rest-assured you’ll have no problem plugging them in.

You know, maybe it could do with a few more USB ports?

Additional ports are also available internally for users who wish to customise their build, which includes the following:

Allowing for user customisation does provide longevity to the device, though I understand the 750W power supply may potentially be the limiting factor for some more intensive upgrades.

When it comes to performance, the Aurora R13 will go above and beyond any other PC experience you’ve had to date. This truly is gaming at its most technically impressive thanks to the real powerhouse behind this setup: the NVidia GeForce RTX3090 with a staggering 24GB of VRAM, at this stage the most powerful commercially-available graphics card. Supporting a near-flawless 4K gaming experience, players will have no issues fine-tuning graphical settings to their absolute maximum while still maintaining a buttery smooth framerate. But don’t take my word for it – here’s some footage to impress you that I captured thanks to my friend WindyCornerTV for his assistance:

The Aurora R13 allows for uncompromised 4K gameplay unlike anything you’ve experienced.

As demonstrated in the video above, the Aurora doesn’t break a sweat even when running the most graphically-intensive games at their highest settings. Able to maintain a smooth 60 fps minimum on most games, the only challenge was during Microsoft Flight Simulator 2020, which admittedly is the most resource-heavy open-world game to date. Though it’s not just the beast of a GPU that lends this PC its impressive performance, as it’s also equipped with the latest Intel Core i9 12th Gen processor sporting hybrid architecture of 16 cores and 32GB DDR5 RAM (supports up to 128GB) for unhindered multitasking.

For all its bells and whistles, with some of the most impressive technology available on the market, this particular build does make some odd storage choices that could justify an improvement. While its 512GB SSD has adequate space and speed to boot your OS and a few chosen games within seconds, a larger option as standard would definitely be preferable for a PC so geared toward gaming (and can be chosen when ordering the PC). Coupled with a 1TB HDD, this particular element of the build certainly seems to be the odd one out as a piece of technology now over a decade old. Thankfully, users can upgrade this to their liking; storage improvement will likely be the first port of call for those wanting the most out of the Aurora. 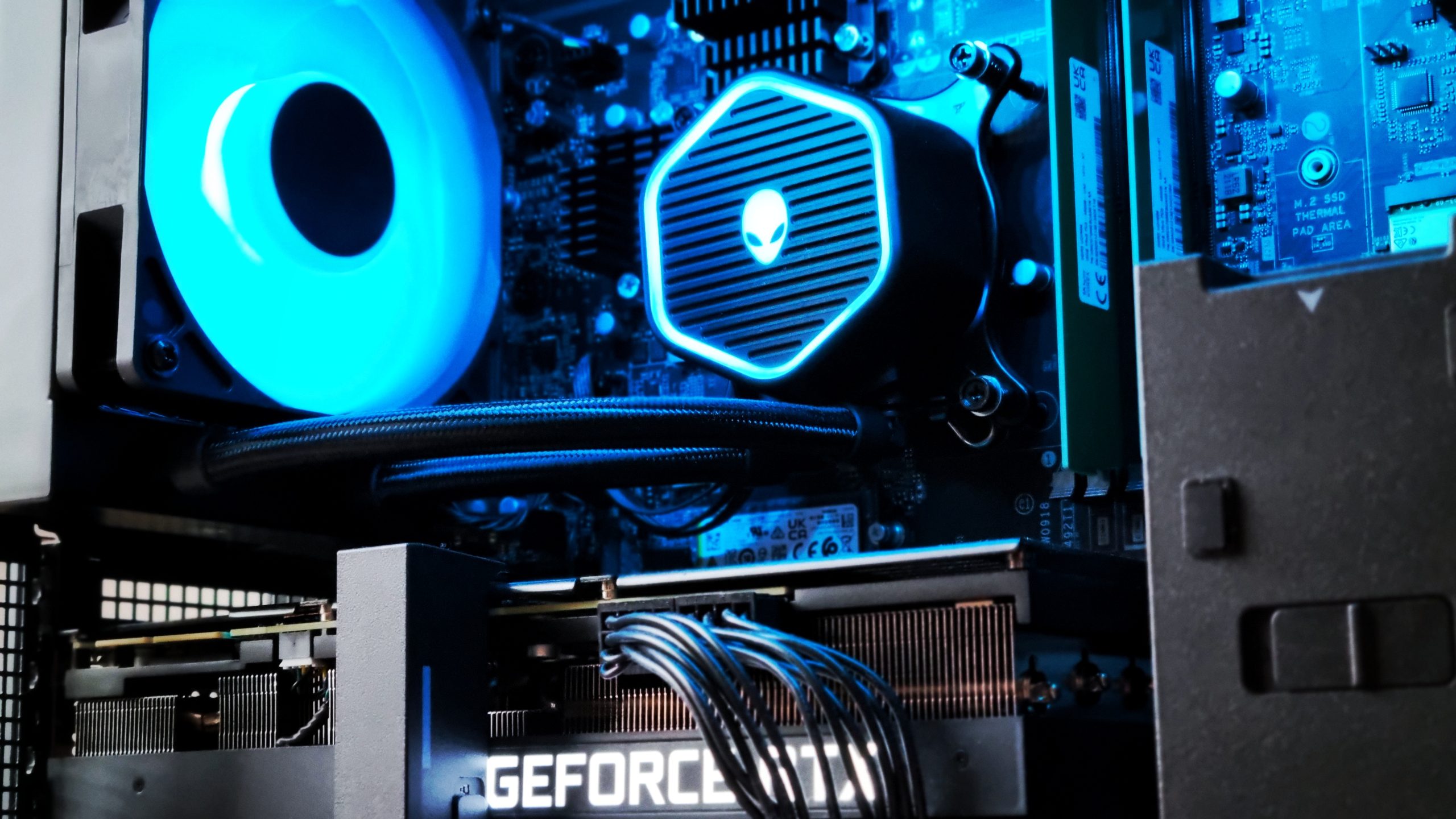 The internal components are neatly-arranged and a pleasure to view through the side window.

Aside from some minor storage concerns, this build has few other performance drawbacks for users wanting an impressive experience straight from the box with no work required. The in-built Alienware Cryo-Tech cooling does an incredibly efficient job of keeping the PC at a reasonable temperature event during the most intense tasks, and for the most part you’ll rarely even hear the unit unless pushing the graphics to its absolute limit.

It almost goes without saying that purchasing a computer with such top-of-the-line specs isn’t going to be without a considerable price tag. Starting from $3,799 for the base model (RTX3060, Intel i5) all the way up to $7,999 for the most premium build (RTX3090, Intel i9), the computer packs a punch in both performance and price. For the deal-savvy, I’ve seen the premium model retail for just over $5,000, which you’d be hard-pressed to buy the individual components for cheaper particularly when the 3090 alone retails for close to $3,000. Thankfully, there are numerous configuration options tailored to gamers who might want to pay a couple grand less in exchange for a slight drop in performance.

As mentioned above, this is not the most ergonomic of PCs, mostly due to its bulk and weight. If your space is limited, then this likely isn’t an ideal choice, especially if you intend to actually place it on a desk. I struggled to find a suitable space, as my office area isn’t necessarily small, but didn’t have the appropriate area for such a large chassis while still keeping the front and rear of the unit easily accessible.

For unparalleled PC gaming in a convenient pre-built setup, the Alienware Aurora R13 is a top contender. This premium gaming PC features components offering performance that will almost certainly eclipse any other PC experience. But with great power comes great size – impressive technical performance comes with an impressively large futuristic tower. Albeit its sleek aesthetic, this is definitely a desktop designed for users with no need for a compact unit. Though if size, space, and price aren’t deciding factors for your setup, the Aurora R13 will fulfil your every need and prepare you for a glorious unhindered 4K experience.

A review unit was kindly loaned by Alienware Australia for the purpose of this review.