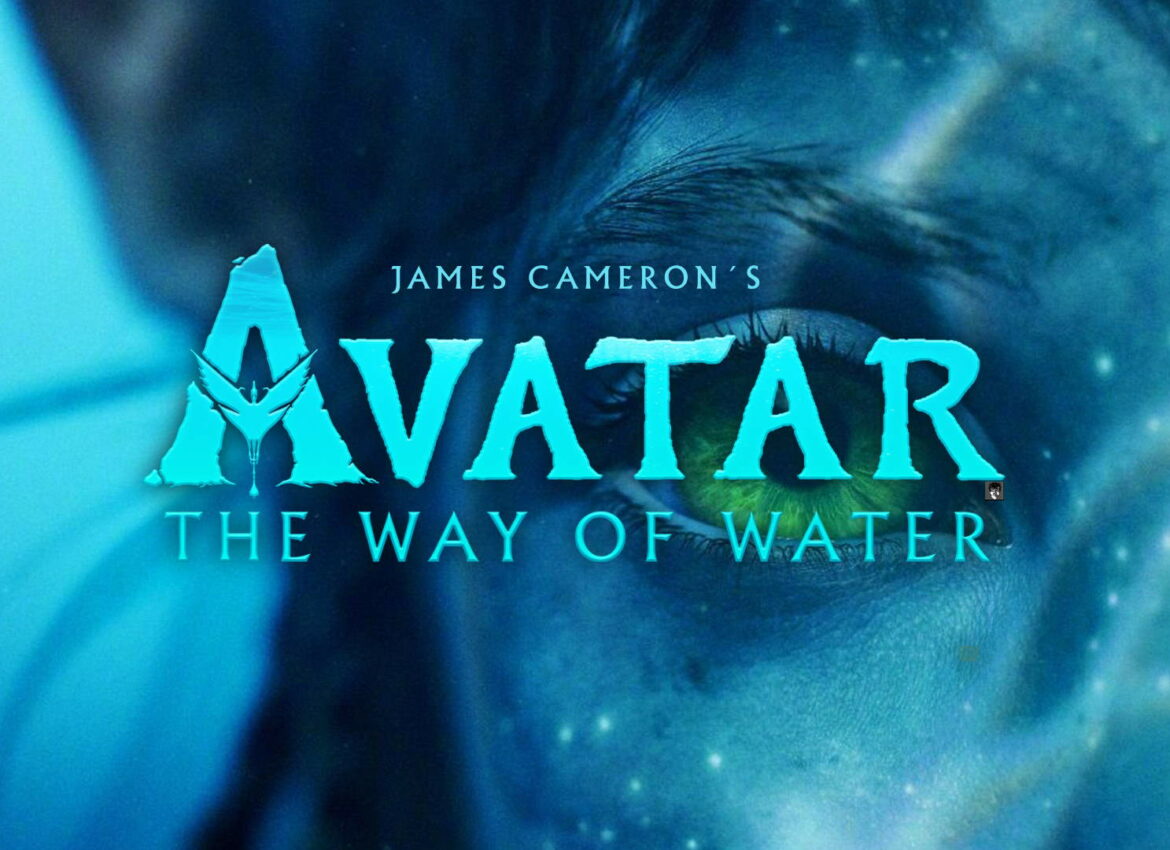 Take a deep breath and dive back into Pandora once again in our Avatar: The Way of Water review.

Few within the film industry can claim to have a lasting impact quite like director, James Cameron. Crafting bold and ambitious films since the late ’70s, Cameron became a household name thanks to his work in breakthrough films like The Terminator, Aliens, and of course his colossal box office smash: The Titanic. Though in 2009, these were all surpassed by a single sci-fi film that took the world by storm: Avatar.

Blue are the people here that walk around.

This visually spectacular film truly set the standard for CGI, earning the title of highest-grossing film of all-time (almost $3 billion!), overtaking Cameron’s Titanic and holding this record for close to a decade. So naturally a film so unbelievably successful warranted a sequel! After 13 years, viewers are once again thrust into the harsh yet breath-taking environments of Pandora in Cameron’s latest epic, Avatar: The Way of Water.

So does Avatar sink or swim in this ambitious sea-quel? Or does it simply feel like a watered down successor to the original? Find out in our Avatar: The Way of Water review.

This section has been made as spoiler-free as possible, but may contain minor plot details.

The Way of Water picks up exactly where the original Avatar left off, with protagonist and retired marine, Jake Sully (Sam Worthington) awakening in his brand new Na’vi body. Abandoning his connection to humanity and leaving behind a life of disappointment and betrayal, Jake is reborn as not only a member of the Omaticaya Clan, but as their leader, the Toruk Makto, a mythical and powerful warrior. And a leader must have a family, as Jake and Neytiri (Zoe Saldaña) welcome the birth of three biological and two adopted children. And, even like human children, these kids are experts at disappointing their parents.

After the destruction of their homeland and sacred Hometree, the jungle-dwelling Na’vi are forced to relocate to the harsh landscape of the Floating Mountains in an attempt to avoid detection by their foes, the Sky People of Earth. Though even after escaping the events that saw their home ravaged, all is not right in Pandora, as both new and familiar threats pose danger for not just the Sully family, but for the entire tribe. 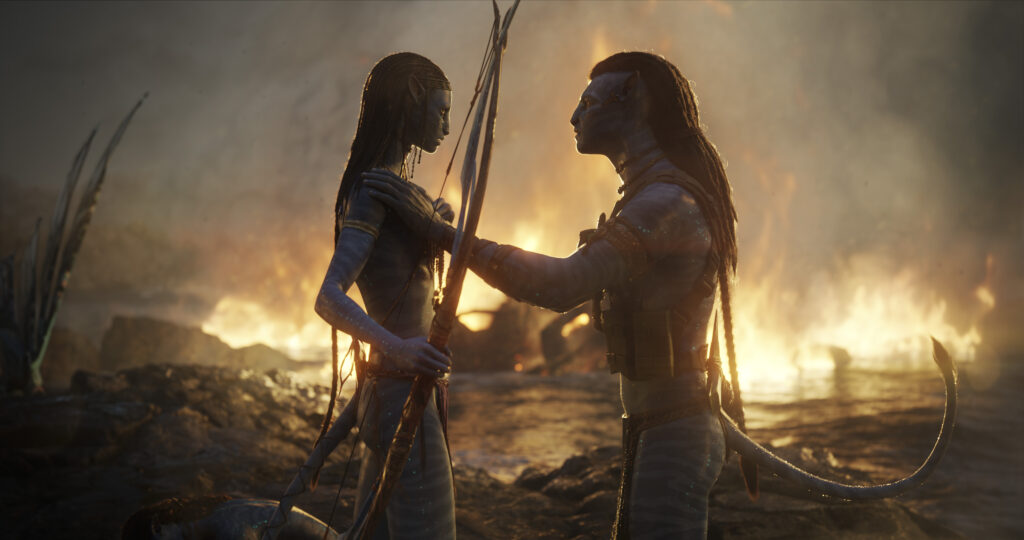 Surely they realise the name “Pandora” doesn’t have the best associations.

Venturing further into Pandora, the Sully family encounter an entirely new clan of Na’vi, the Metkayina people whose connection with water extends deep beneath the waves. In need of each other’s help, the two tribes cast aside their differences to face new threats, and overcome the challenges facing their people and their spiritual homeland. 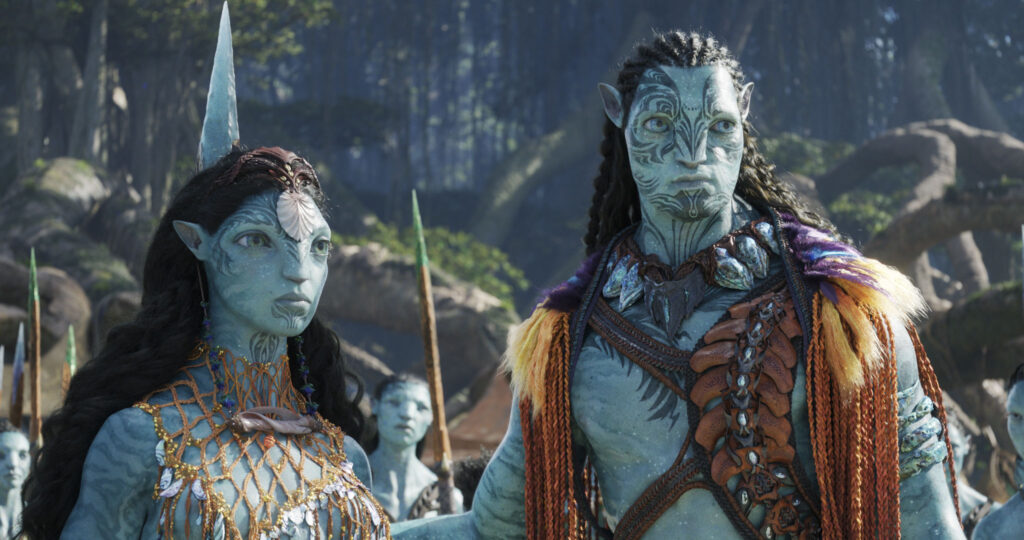 Leaders of the Metkayina Clan, a tribe of Na’vi adapted for life on the planet’s reefs.

Without going too deep into the story to avoid any potential spoilers, The Way of Water feels simply like a retelling of the first film. Its overarching story, themes of environmentalism, spirituality and inclusivity, and manipulation of resources of financial gain all feel overly familiar. Rather than creating its own story within Pandora, this sequel chooses to instead re-tread familiar territory much to the disappointment of viewers hoping for a thrilling new narrative.

Now normally for the purpose of our film reviews here at Qualbert.com, we generally focus on a film’s direction first. But anyone who has watched the original Avatar will know that the film had one massive appeal far surpassing its other elements. I’m of course talking about the ground-breaking, jaw-dropping visuals of Avatar, featuring monumental CGI with unsurpassed detail. The Way of Water is no different, and in many ways manages to improve upon the distinct aesthetic established in our first visit to Pandora. 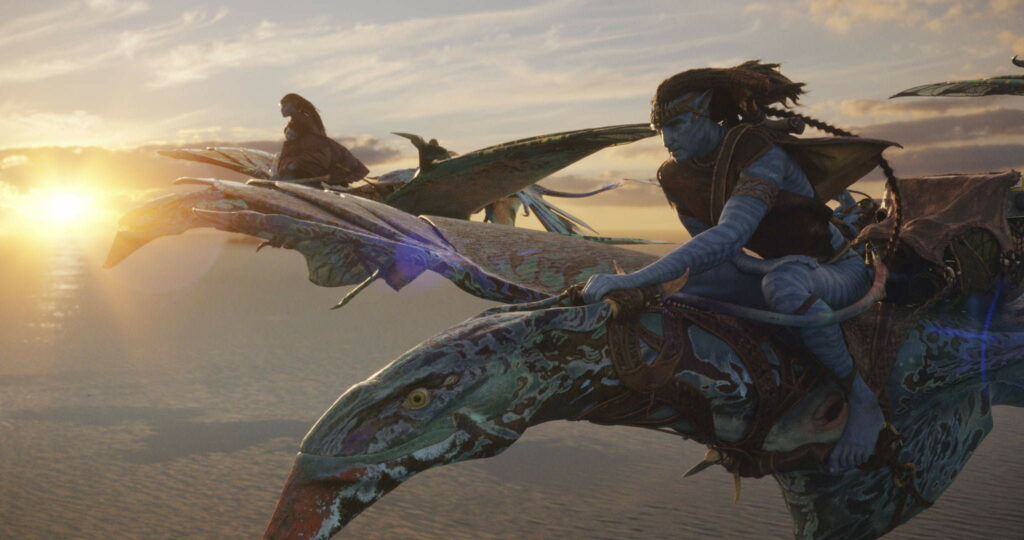 The Way of Water is nothing short of visually spectacular. Immersing viewers initially in the familiar lush jungles of Pandora, the film’s aesthetic drastically shifts to vibrant hues of blue scattered with gorgeous luminescence among the planet’s reefs, teeming with life. With the Metkayina’s spiritual connection to water, from which all life begins and ends, much of the film takes place underwater and these scenes in particular are honestly beautiful, particularly if viewed in 3D. Taking advantage of high framerate technology (HFR), the majority of the film runs at 48 frames per second, double that of a regular film. This gives many of the action scenes a smoother, more realistic appearance, much like the visual jump between a 30 and 60 fps game. This is especially noticeable in the film’s many chase and action sequences, which are far more fluid and dynamic as a result. It genuinely does make a significant difference, though may take a bit of getting used to as most of us are accustomed to 24 fps viewing. 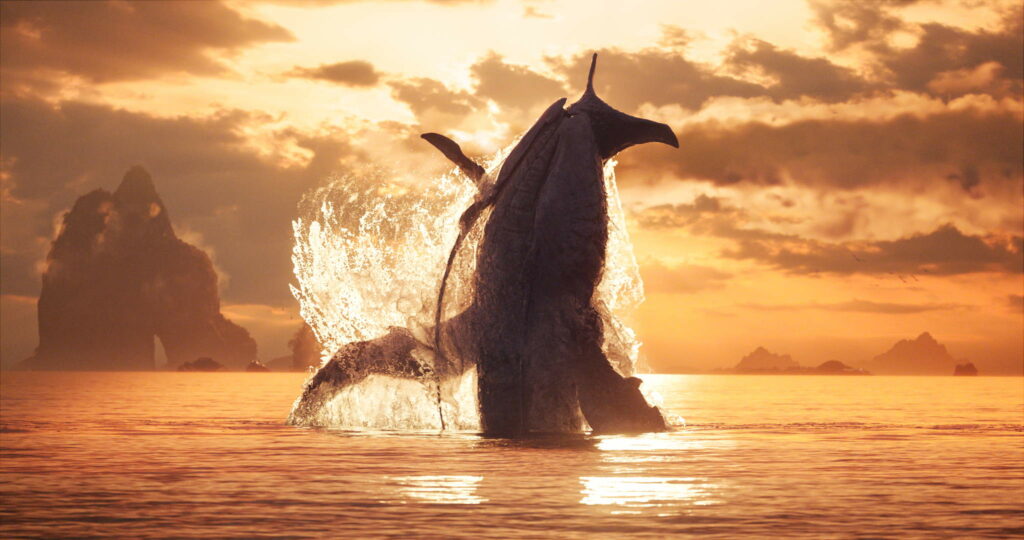 It’s the circle of life.

Lastly, credit must be given to the incorporation of real-world culture and nature into the design of Way of Water’s people and its fauna. Throughout the film, there are obvious nods to Māori culture amongst the Metkayina, whose designs and rituals pay respect to customs and traditions. Many of the film’s fantastical underwater creatures draw inspiration from those on planet Earth, particularly the Tulkun, whale-like creatures that share a spiritual bond. At times the film look so convincing, you’d be almost convinced you’d be about to hear some narration from Sir David Attenborough.

But where Way of Water matches and even surpasses the original visually, the remainder of the film feels all too familiar. Once you look past the new setting and impressive underwater visuals, it’s almost as if you’re watching the exact same film as 13 years ago. It’s clear that James Cameron saw the success of his original creation and decided to stick to this formula rather than stray away from it. A scene about learning to hold a bow? Now where have I seen this…

From its characters and plot, through to underlying themes, scenes, and even exact lines of dialogue, so much of Way of Water feels recycled. Despite the film amassing over 3 hours of content, little of this feels fresh. Admittedly, the sequel does differentiate itself by placing far more of an emphasis on familial bonds and living up the expectations of one’s parents. But outside of this, the majority of Way of Water takes too few risks to differentiate itself from what we’ve already experienced in Pandora. Becoming friends with a hostile beast? Now where have I seen this as well…

The same can be said for Avatar: The Way of Water’s soundtrack, which sounds convincingly like the original, even down to individual tracks. While James Horner does not return to score the film, Way of Water’s composer and frequent collaborator with Cameron, Simon Franglen, does almost too good of a job at emulating Horner’s sound of the first film. Many of the big, bold orchestral tracks are suitable backing for much of the film, but do little to stand out from its precursor. Just take a listen to the film’s main theme for an example:

Way of Water’s main theme, expanding upon the four note melody from the original.

What is particularly impressive in terms of audio is the actors’ skill in delivering emotive lines that feel perfectly suited to each situation, which goes beyond voice acting and delves deeper into the motion-capture portrayal of their respective characters. Zoe Saldaña playing Neytiri delivers an emotional performance as a mother with deep attachment to her children, with raw emotion that enhances many of the film’s most tense moments.

I have no doubt that Avatar: The Way of Water will be a worldwide box office success thanks to the reputation of James Cameron. But rather than tasking risks to improve upon the original film, The Way of Water decides instead to be a film that’s near identical. Its story and themes feel as if they’ve been cloned and given an impressive visual upgrade, which is the key highlight of returning to Pandora once again. From a visual perspective, Avatar’s CGI once again blows many other films out of the water, but look beneath the surface and you’ll see that it does little other than ride on the coat tails of its own success.

Get the best deal on a copy of Avatar: The Way of Water here!

A preview screening was kindly provided by 20th Century Fox Australia for the purpose of this review. If you enjoyed this review, be sure to follow us and check out more of our film reviews.