Are you a fan of crossing dressing historical ladies like Joan of Arc, or Mulan? Well, get ready to be zipped back to medieval Japan in the midst of a civil war between two great houses, where your choices as the heroine, Shanao, lead you through a thrilling narrative. (Where you can romance famous handsome historical figures, the dream of every history nerd!) The otome genre features elements of storytelling and romance combined into a visual novel.

Birushana – Rising Flower of Genpei – is classified as an otome game (also as a visual novel), a genre targeted at woman that involves narrative choices that guide you through a story. So be warned, no intense gameplay to be found here. However, if you want a solid story with an active leading lady with a bit of romance, then Birushana is for you.

The Tale of the Heike is one of the most famous Japanese historical epics, comparable to Homer’s mythical Iliad. Set during the end of the 12th century, as the Genji and Heike clans clash for dominance over the archipelago. Birushana – Rising Flower of Genpei – published by Idea Factory International, is very loosely (the word is doing a whole lot of legwork in this sentence!) based on The Tale of the Heike, specifically the Genpei War (1180-1185) in which the Genji clan rises from its ashes after it’s defeat in the Heiji Rebellion some years before. Keep your friends close, and your enemies closer.

However, Birushana has a twist – the famous historical warrior Yoshitsune isn’t a man, but a young woman whose true name is Shanao. Raised as the youngest surviving scion of the crushed Genji clan, she is expected to defeat the Heike. Many leads in otome games take on a more passive role. While I really enjoy softer spoken heroines, it is refreshing to follow along with Shanao, as she takes a much more aggressive, active role in her story, being raised as a warrior.

Her would-be suitors (that you can chose to build a relationship with) are Noritsune a hot-headed son from the Heike clan, Benkei, a kind-hearted monk, Shungen, your token childhood friend, Yoritomo, your half-brother (sigh here with me folks) and Tomomori, the son of Kiyomori of the Heike, seen as the “final boss” or ‘true route’, where the crux of the story is revealed. 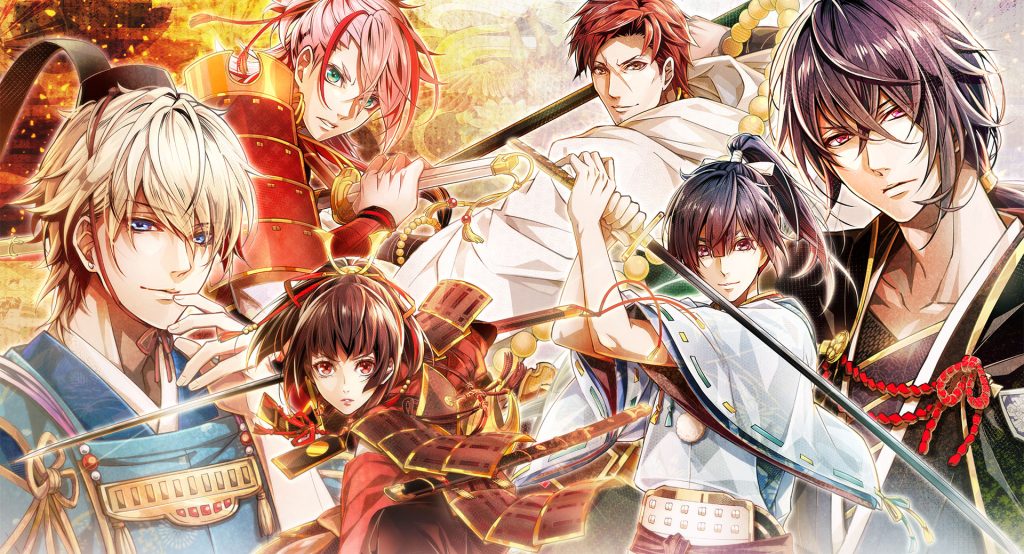 Say hello to your suitors.

An otome game’s first initial chapters are called the common route, and during this time you are given certain dialogue choices that fill up an invisible meter, and once this meter fills up for a certain character, you unlock their own personal ‘story’, or route. This meter isn’t too obtuse though, as certain choices that build up affection with the various men are shown visually on-screen, with a flower blooming a colour that responds to each man.

The lead artist, Koji Haneda was responsible for some of the animation seen in Persona 5, so the visuals here a slick and colourful. The expressions on the character’s faces, as well as the details on the historical clothing really popping out to the eye. Koji Haneda’s art for Birushana is certainly one of the highlights of the game.

The voice acting is well done. Furukawa Makoto (as Yoritomo) being veteran to the genre lends that steely tone to his warlord, and Fukuyama Jun (as Tomomori) being excellent to my ears.

Otome games sure are a niche genre, but if your second favourite hobby is reading (after video games) and you enjoy romantic historical fiction with interactive elements, then walk, not run, to play Birushana – Rising Flower of Genpei.

A review code was kindly provided by the publisher for the purpose of our review. Looking for another great visual novel? Check out our review for ALTDEUS: Beyond Chronos, the futuristic VR visual novel.

Like a rising flower, can love bloom on the battlefield?