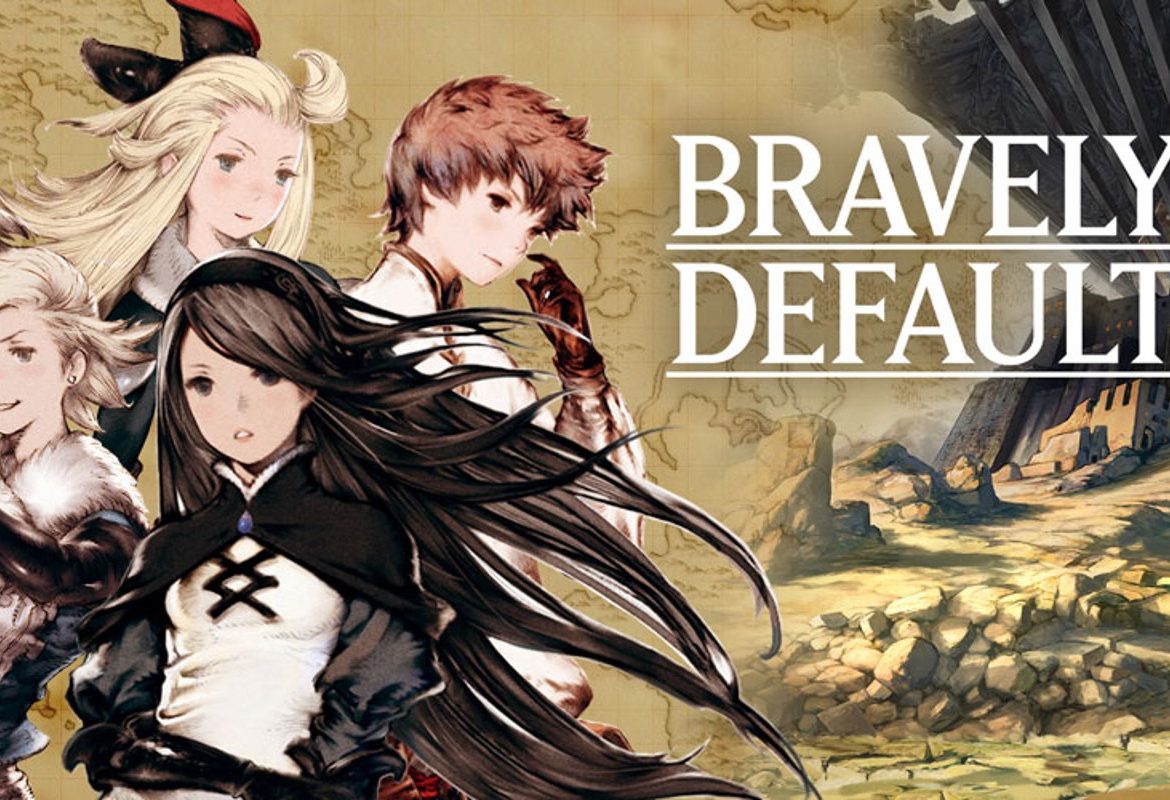 It’s difficult to believe that it’s been over 30 years since Square released the original Final Fantasy game for the Nintendo Entertainment System in Japan — a series that has left a lasting legacy in retro JRPGs and defined an entire genre. Now with fourteen (going on fifteen) sequels to the original game, numerous spin-offs, and even sequels to sequels, Square Enix have produced a JRPG that returns to their true roots — a traditional JRPG in all sense of the phrase: Bravely Default. Initially named as a spiritual successor to Final Fantasy: The 4 Heroes of Light (released in 2009 for the Nintendo DS), Bravely Default draws heavily upon Square’s retro JRPGs and does so perfectly. With a mixture of familiar story and a brilliant job system à la Final Fantasy III or Final Fantasy V, Bravely Default feels like a romp through a game that would have felt perfectly at home on the SNES.

The first familiarity to traditional Square Enix JRPGs is blatantly highlighted in the first few minutes of the game with regards to the opening cutscene. Here’s the basic plot: four crystals and four heroes; a crystal breaks and the entire world is set into havoc, tearing apart at the seams — and of course it’s up to our heroes to set everything back to normal! If you’ve ever played any of the earlier Final Fantasy titles, this plot should seem awfully familiar, but this isn’t a bad thing. The four characters you’re soon introduced to are brimming with personality and emotion, which is reinforced by the superb voice acting throughout the story.

The first, Agnès Oblige: the game’s main character and protagonist, a “vestal” (protector) of the Wind Crystal. A stubborn yet determined character who wishes to bear her own burden. Accompanied by Airy the fairy, Agnès seeks to return the Wind Crystal to its former state.

The second, Ringabel (or so he goes by): a young man whose memory was lost in the calamity and is left with nothing more than a mysterious book that contains future visions of his love interest. An absolute charmer from the very beginning of the game, Ringabel takes himself as quite the ladies’ man and isn’t afraid to show it. Comic relief at its finest.

The third, Edea Lee: daughter of Brave Lee (pun most definitely intended), who is the leader of the Eternian anti-crystal movement. With a strong sense of justice and respect, Edea is fierce and quick to anger but is passionate in defending those who have become victims of her countrymen’s actions.

Lastly, Tiz Arrior: a simple sheep herder from the small village of Norende, who saw his entire life quite literally collapse before his eyes and his brother fall into the deep abyss created by the corrupt Wind Crystal. His main goal is to restore Norende, and he acts as Agnès’ protector in order to do so.

Each character is absolutely unique and brimming with personality and charm – no more angsty teens with vibrant or spiky hair. Bravely Default returns to the traditional fantasy RPG with regards to the characters and the story, both of which blend perfectly. Although initially a ramshackle group, the four heroes quickly warm to each other and become quite a dynamic party, which is highlighted in various party chats which take place upon pressing Y, giving the player extra insight to the relationships between the game’s protagonists. Not only does Bravely Default convey a true sense of story progression while continuing through the game, it provides proper depth, emotion and interaction between the party of four.

Now onto the combat — this is one of Bravely Default‘s most defined features, as even the back of the game case states that the new system is a “new breed of turn-based command battle” with the introduction of the brave and default actions. What I initially thought to be somewhat of a gimmick to vary combat is actually quite essential to the gameplay and is one of the finest combat enhancements since Final Fantasy IV‘s Active Time Battle system. The Bravely Default system utilises ‘Brave Points‘ — a number value assigned to each character during battle.

Beginning at 0 at the start of a battle, a character may choose to act default, which makes the character defend that turn but increases the number of Brave Points by 1, up to a maximum of +3. Alternatively, a character may choose to act brave, which consumes an additional Brave Point but allows an extra turn to be taken, up to a limit of 4 per turn. Brave Points may also be used for stronger moves — for example, a move that does double damage may cost 2 Brave Points where a regular action only costs 1. However, if Brave Points go into negative values, that character cannot act or defend until their Points return to 0 — so if they have -3, they are helpless for three whole turns while they regain Points. The inclusion of the Bravely Default system adds a deeper layer of tactics to the traditional turn-based battle system, which feels familiar yet modern with this new twist on combat.

As mentioned previously, Bravely Default employs a job system highly similar to that of Final Fantasy III (for those who have played the DS port). Each character begins in the Freelancer job at the beginning of the game and may choose from no others, but as the story progresses, various jobs are unlocked with the defeat of each boss. Expected jobs such as the Monk, Black Mage, White Mage, Knight, and Thief make a return; however, among these are a slew of some of the most unique classes ever seen in a JRPG. Classes such as the Merchant (which uses money to damage foes), Spell Fencer (which enchants a sword with an element or status effect spell), Time Mage, and Performer are some of the few more obscure jobs that unlock as the game progresses, allowing for limitless customisation of each character.

Special attacks are also a rather unique feature of Bravely Default‘s combat, as each may be completely customised to the player’s desire. Depending on which weapon the character has equipped, the player will be able to perform a unique special attack; these not only unleash hell upon enemies, but also provide stat boosts for a limited time while a special theme is playing. What makes these special attacks so unique is the fact that they may be completely customised: changing names, effects, elements, and even what each character says after one is performed. It’s the first time such a system has been seen in a JRPG, and it adds an exceptional amount of depth to what would usually be a simple “I win!” button.

StreetPass capabilities also play a vital role in Bravely Default, as StreetPassing friends who also play the title will allow you to call them during battle and recruit them in order to restore Nordene village. Somewhat of a sidequest, restoration of Norende village uses a timer in order to rebuild buildings and level up shops, which offer bonuses to gameplay in the overworld such as purchase of otherwise unobtainable items. This is where StreetPass becomes vital, as where 1 friend will take 10 hours to construct a shop, 5 friends will construct the same shop in 2 hours. Furthermore, people you StreetPass or receive via SpotPass may be added as friends or nemeses in Norende village — these may offer help or challenge you to battle, each of which provides added bonuses to gameplay outside of Norende. It’s an excellent use of Streetpass: not essential to gameplay, but it does offer advantages if used frequently with the addition of unique weapons, armour, and special move pieces.

One of Bravely Default‘s most notable features is that of its unique art style. While the overworld and dungeons might simply look like any other standard JRPG, it’s in Luxendarc’s various towns scattering the overworld that Bravely Default‘s visuals become seriously stunning. Upon entering a town you’re given a zoomed-out view of the entire city, each of which is absolutely gorgeous and seems as if pencil-sketched, giving a beautiful effect as you simply walk about what would otherwise be relatively normal towns. This is due to the game’s leading graphic designer, Akihiko Yoshida, who assisted in the design of several cult classics such as Final Fantasy Tactics and Vagrant Story, as well as my personal favourite, Final Fantasy Tactics A2: Grimoire of the Rift. Yoshida’s influence on the art in-game is easily noticed, and adds quite a charm to the characters and enemies.

Not only are the landscapes and towns lovingly crafted in Bravely Default, but the small, somewhat-chibi characters also have very fitting designs. Of the game’s 24 job classes, each of the four characters look completely unique depending on what job class they currently take. Any weapons and various accessories equipped to each character will show up on the character’s model in battle, which is a nice addition. Battle animations and various magic attacks are standard fare, with nice little animations depending on what spell is being cast but really nothing too breathtaking apart from special attacks.

While being an absolutely superb game in all regards — art, story and gameplay — Bravely Default‘s aurally divine soundtrack is where it stands above most other modern JRPGs. Performed by Japanese progressive/symphonic metal group Linked Horizon, with lead composer Revo who performed the openings to last year’s critically acclaimed anime series Attack on Titan, Bravely Default‘s soundtrack is easily the best original JRPG score since Xenoblade Chronicles. Performed live by the Linked Horizon orchestra, each song is completely unique and accompanies the game nearly perfectly. Fast-paced orchestral metal complements each battle, with unique themes for each character when a special move is performed, and emotional scenes are coupled perfectly with heart-wrenching strings. It’s difficult for me to convey the perfection that is Bravely Default‘s soundtrack in words alone — it’s something to be experienced firsthand with headphones on while absorbed in Bravely Default‘s entrancing fantasy world.

With a combination of beautiful visuals, enthralling story, lovable characters and a superb soundtrack, Bravely Default is the 3DS’s killer JRPG. If you’ve been eagerly awaiting the release of Bravely Default II on the Nintendo Switch, it’s not too late to go back an experience the original!

So why shouldn’t you play it?

This review was written on February 3rd 2014 for Gamnesia, with some sections updated for accuracy.
You can read more of our reviews HERE or over over at Gaming News Australia.

A brave, modern take on the default JRPG formula.