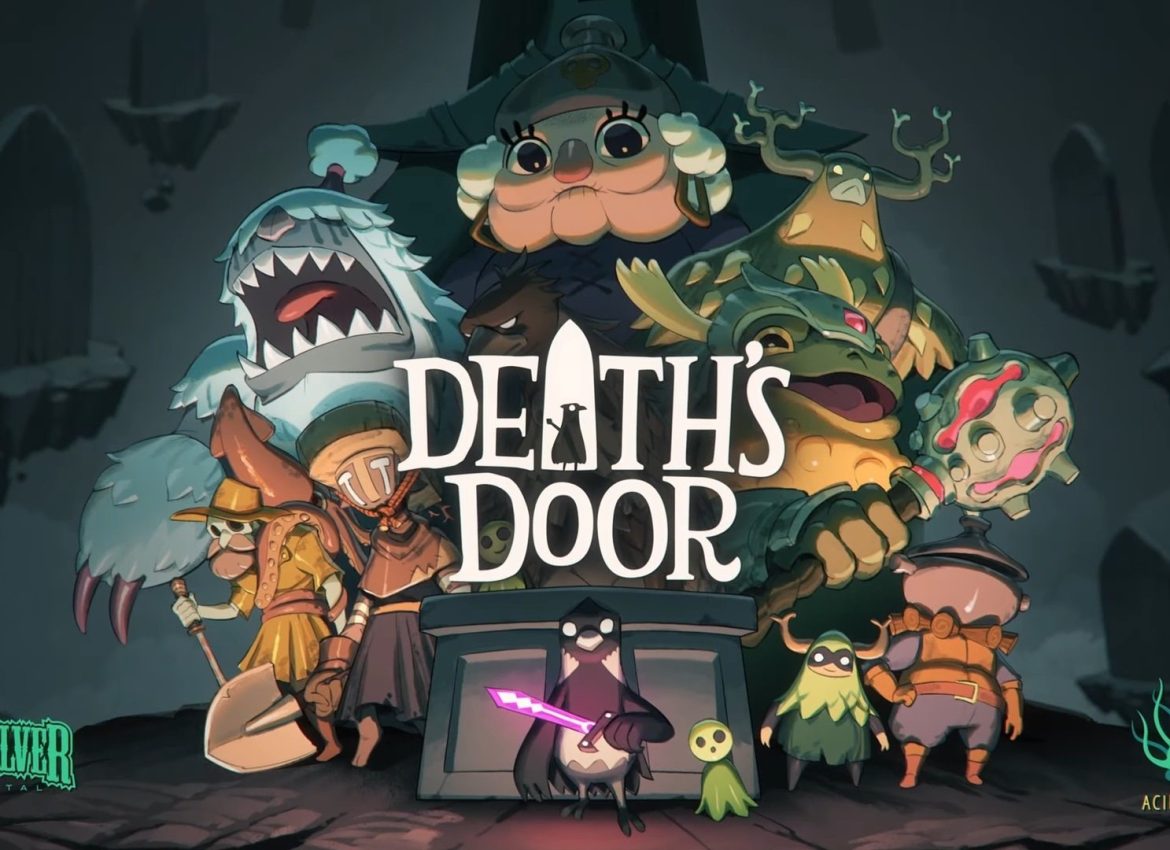 UPDATE: we have now published a full review for Death’s Door, so be sure to check that out here if you’d like a comprehensive overview of the entire game. This articles covers only the preview, which is approximately 30% of the game but still a good snapshot of what to expect from the rest.

Devolver Digital have certainly garnered a reputation for being one of the best indie videogame publishers in the business. Their madcap approach to advertising and promotion coupled with handpicked creative and often unusual games has caught the attention of gamers from around the globe since their inception in 2009. And, like a fine wine or a delicious block of parmesan shaped into a game controller, Devolver only seem to get better with age.

To add to their already vast library of published titles, earlier this year the team announced a game by the name of Death’s Door, an intriguing hack & slash following the tale of a soul-collecting crow set in a stylish gloomy world. Created by Acid Nerve, the two-person team responsible for Titan Souls, this immediately grabbed my attention thanks to its unique visual style and its avian protagonist and characters. Thankfully, the kind team at Devolver have provided me with a preview build to explore this entrancing world well before its launch on the 20th of July.

So what awaits behind Death’s Door?
Let me open the door a crack and give you a peek into the preview.

Office work can oftentimes be monotonous, and that’s no exception the Crow, who lives life by the clock, punching in on a daily basis and delivering the harvested souls of those who have died. Every day is much the same in this bleak and monochrome office, but a bird has to make a living, and so he sets off on his usual daily task to collect the next assigned soul on the roster.

However, this routine task doesn’t quite go according to plan…
Upon collecting the next assigned soul, the Crow [STORY DETAILS REDACTED] and when returning to the office, it’s made apparent that the Crow’s own soul may be in danger unless actions are taken to fix what has just occurred. Venturing back into the bleak landscape to seek a solution, he just so happens to stumble upon…

Though inconveniently (but convenient to the plot) the door is locked, and the key to opening it lies in collecting the three Colossal Souls belonging to the Tyrants of the kingdom: a cursed witch, a mad king, and a vicious beast. Only by opening Death’s Door may the Crow complete the mission he has been tasked with. And so the Crow’s journey begins…

The game takes place across a sprawling map that is accessed through doors in the office-like hub world. By entering these doors, the crow is thrust into new locations full of souls ripe for the harvest. In design akin to Dark Souls, maps are vast and intertwined in clever ways, with shortcuts aplenty and secret locations that effortlessly link back to one another. Even though the preview build only showcases 5 of these areas, I was fascinated by each and wanted to explore every single corner to satisfy my own curiosity. Environmental puzzles will hinder the Crow’s progress throughout these area, and while most are simple, they are rewarding and offer more of a challenge when simultaneously trying to fend off hordes of enemies.

After exploring the main area, the map eventually branches off into smaller, more intricate locations that have the feeling of a traditional dungeon and reminiscent of Zelda titles. In the preview build, exploring the Ceramic Manor (the Urn Witch’s Mansion) involved collecting several keys, solving small puzzles in each room, fighting challenging enemies, and collecting the souls of four deceased crows to unlock a door and progress. After unlocking this door, the Crow gains the ability to fling a fireball, allowing access to a deeper area of the dungeon and then to the boss that awaits menacingly at the end. I couldn’t help but be reminded of the dungeons of A Link to the Past or Minish Cap in this design, but this is truly a compliment to the gameplay.

Harvesting souls is not without its dangers, and as such the Crow is equipped with weaponry to help on this treacherous quest. Three melee weapons were made available in the preview build (sword, daggers, umbrella), and two ranged attacks (bow, fire spell). Attacks can be chained together in swift movements, and when coupled with ranged attacks and well-timed dodges, become a fluid barrage that at times made me feel as if I was playing Hades again. Collecting souls while progressing can be spent back at the office to upgrade the strength of attacks, the speed at which they can be performed, or other stat boosts that assist the Crow during combat.

Though I only played for just over 2 hours, by the end of the preview build I felt proficient in the combat and was able to take down the final boss without taking any damage. Restoring health during combat is not an option either, as the only way to do so is by planting seeds at particular pots and then consuming the bloom that sprouts from them. This means that every enemy encounter must be done with caution to avoid losing health unnecessarily.

Interestingly, the game’s design and visual style seems somehow both charming and unnerving. The isometric view and detailed environments occasionally appear like miniatures or scale models, and the design and animations of the Crow are cute and at times juxtaposes with the bleak surroundings. Enemies feature a cartoonish yet grotesque appearance, and the design of some characters is just straight up hilarious, including a cast of characters whose heads have been replaced with pots by the wretched Urn Witch.

It’s a lovely looking game and its eye-catching environments like detailed dioramas definitely had me pausing to appreciate the Crow’s surroundings on numerous occasions. There’s a lot of attention to detail, and at times this is even incorporated into some puzzles, which will require you to closely analyse for hidden clues. Though this has just been a taste, I’m excited to see the entire world in the full release shortly!

I’m a sucker for a good soundtrack. So how does Death’s Door hold up in only this short example? Well, the world of Death’s Door is bleak, so too should be its music. Each track in the preview build has a certain sadness to it, mostly featuring piano with light orchestration and ambient background effects. This obviously intensifies during enemy encounters or boss fights, becoming more frantic and fast-paced, but never seems to stray from an overall feeling of melancholy. Here’s a snippet of the music from the Ceramic Manor, the first main dungeon of the game:

What’s next for Death’s Door?

It’s hard for me to pass judgement on a mere preview of the game, but of what I’ve played so far, I’m eager for more. An intriguing world, smooth combat, and attractive visual style definitely make Death’s Door a game you’ll want to keep your eyes on like a hawk (or a crow). It releases shortly on July 20th for PC and Xbox One/Series S/Series X, and I’ll absolutely be playing the full version as soon as I can get my claws on it! Keep an eye out for the full review which I’ll be posting closer to launch.

Reaping souls ain’t much for the Crow, but it’s honest work.