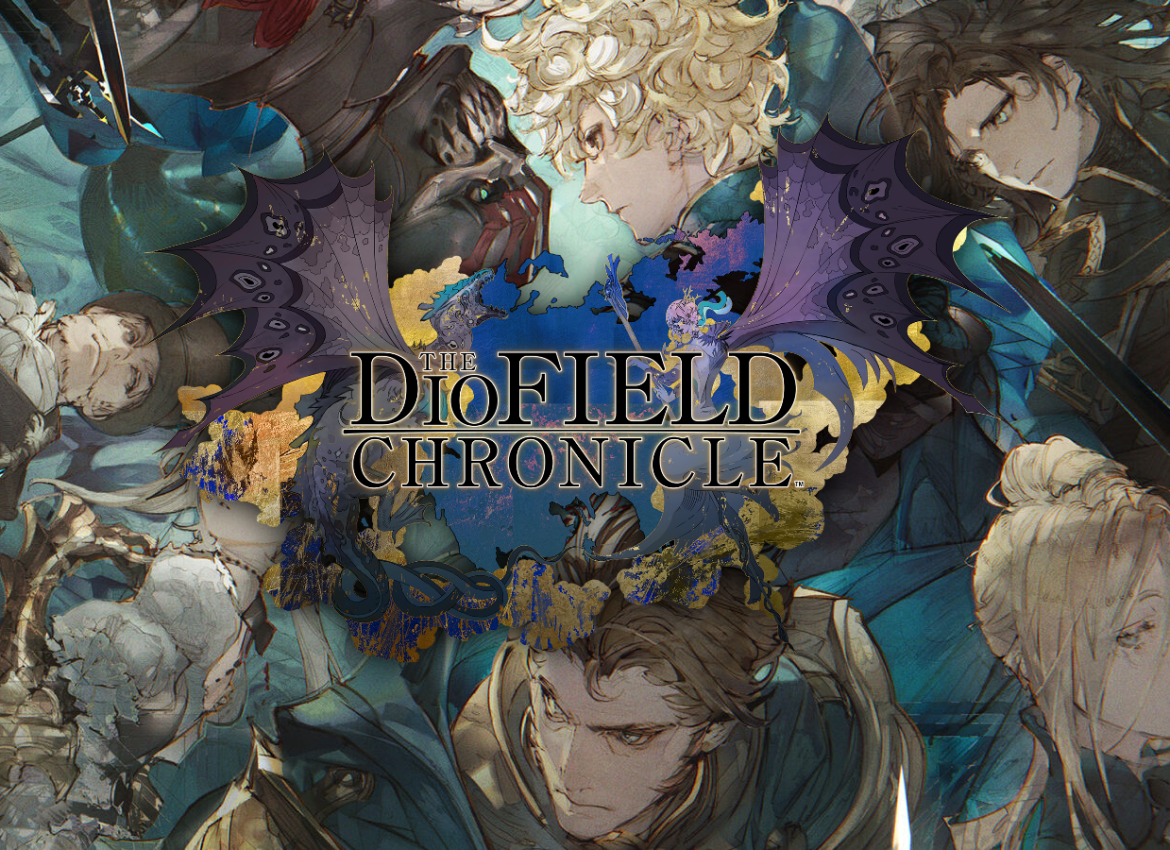 Ever since its debut in 2017, the Nintendo Switch has carved a path through modern gaming as the most versatile platform on which to enjoy strategy games. Sporting a huge library of strategy titles from stellar exclusives like Fire Emblem: Three Houses and Mario + Rabbids: Kingdom Battle, through to third party RPG giants like Triangle Strategy and LIVE-A-LIVE, there’s no shortage of brilliant strategy titles on Nintendo’s hybrid handheld. Just a small selection of the best strategy games exclusive to Nintendo Switch.

Joining their ranks is a brand new series from Square Enix, yet again combining fantasy and strategy: The DioField Chronicle on Nintendo Switch, PC, PlayStation and Xbox. The brainchild of Shigeyuki Hirata (9 Hours 9 Persons 9 Doors, Pokémon Mystery Dungeon: Explorers of Sky), DioField claims to offer a brand new bold political tale of warfare, betrayal and intrigue in a completely unfamiliar setting. So does The DioField Chronicle triumphantly conquer the SRPG genre to join the ranks of Square Enix greats like Tactics Ogre and Final Fantasy Tactics? Read ahead and venture into the hostile Kingdom of Alletain…

The Isle of DioField, a vast land rich in Jade, the raw material required to power modern magic, has prospered under 200 years of uninterrupted peace. Belonging to the powerful lineage of the Shaytham Dynasty under the rule of King Regalt, DioField is safely disconnected from the larger continent of Rowetale, where the Schoevian Empire and Rowetale Alliance are locked in a bloody stalemate, both vying for power on the mainland.

Let’s just say that The Empire and the Rowetale Alliance don’t quite see eye-to-eye.

Though after centuries of peace on DioField, this era gives way to a time of great turmoil… War looms dark over the kingdom, and amid the unrest the Empire commands a disciplined army versed in powerful Modern Magic; a force to be reckoned with. While the war rages on the mainland and the fighting intensifies, The Empire turns their sights to DioField in pursuit of the one resource they desire: Jade. DioField Island, the first ever continent made entirely of tabletop RPG pieces.

With the Kingdom of Alletain in desperate need of defence, a trusted noble, Willian Hende, assembles a troupe of elite mercenaries from across the continent. Thus, the Blue Foxes are formed, a Mercenary Company comprised of four leaders, each of whom are skilled in the art of war and strategy.

Led by Andrias Rhondarson, a calm and resourceful strategist versed in ancient sorcery, and accompanied by his headstrong childhood friend and superb infantryman, Fredret Lester. The two journey across DioField, gathering ranks for the Blue Foxes and improving their military prowess through every new member. Assembling a company of warriors from deft and deadly assassins through to noble Magickers proficient in mighty sorcery, the Blue Foxes aid the crown in their defence of DioField.

Through trouble brews within the Kingdom. As the story of The DioField Chronicle unravels, you’ll be double-crossed, stabbed in the back, rise to power, and fight for the survival of the kingdom all under the banner of the mighty Blue Foxes. It’s cliché, at times predictable, but climaxes with some impressive plot twists that will ensure you keep playing until the bitter end.

DioField is divided into two distinct portions of gameplay: the Blue Fox headquarters, and missions that take place across the continent. As a strategy RPG, The DioField Chronicle will have you spending the majority of your time on the battlefield, defending the island and its inhabitants. Prior to each mission, objectives are discussed with the Blue Fox team around the War Table in stylised cutscenes where the characters often argue their political differences, before the squad is then dispatched into combat.

Combat is simple and approachable even for players entirely unfamiliar with the genre. Where many strategy RPGs would have you control entire armies in warfare, DioField entrusts the player with only 4 units, each of whom can be controlled in a group of individually. Players may choose their favourite units, which range from close-range Swordmen and Cavaliers, through to ranged units such as archers and Magickers. Each unit is also assigned a support whose skills can also be used mid-battle, but are not deployed on the battlefield.

Once engaged in the real-time combat, players may stop time and pick from a variety of skills that can be unlocked as each unit progresses up a skill tree. These are especially useful when dealing with crowds of enemies, as many of the skills come with AOE effects designed for crowd control. Though they are to be used wisely, as using skills consumes points that don’t automatically regenerate. After a few missions, you’ll quickly get a hang of tactics that suit your playstyle. Personally, I was able to rely on Andrias, an assassin unit with ridiculously high damage, to power through the entire game.

Andrias, the Blue Fox leader, is powerful. Too powerful.

Enemies will spawn in waves, and defeating each enemy will drop orbs that fill a “TP Gauge” which is used to unleash powerful Magilumic Orb attacks. These are essentially summons, bringing forth the power of a god to decimate any foe that lies in your path. From the beginning of the game, the player is given the power of Bahamut, which casts a huge AOE meteor with colossal damage. It’s satisfying, but soon becomes far too over-powered as an “I win button” sort of attack.

Battle not going in your favour? Just summon god to annihilate your enemies.

Most missions can be easily accomplished without too much of a focus on strategy, but after playing through a few you’ll notice a pattern appear. Almost every mission in the game is the same – leading to an uninspired cycle of repetition. Throughout the game’s ~30 hour campaign, most missions simply the following formula: “walk here, kill enemies, more enemies spawn, kill enemies, boss spawns, kill boss“. It’s enjoyable for the first half of the game, but can’t help but feel tedious the more you play.

To break up the combat, players can explore the Blue Foxes’ headquarters between missions and interact with characters that have joined the unit. It’s a bit like a shrunken down Garreg Mach Academy from Fire Emblem: Three Houses, providing insight into characters and some much-needed downtime between battles. The HQ also offers the ability to upgrade weapons, skills, and Magilumic Orbs as the story progresses, bolstering the power of your squad. These intermission sequences are short and sweet, and will appeal to players who are looking for a bit more character development than is on offer during the campaign. Strolling around the Blue Fox HQ eventually becomes tiresome, as it lacks the same charm and detail found in many other strategy RPGs. Side quests are scattered throughout the establishment, but these are either short sequences of dialogue between characters, or requests for new missions which, you guessed it, involve killing waves of enemies. That’s not to say that the gameplay is bad – in fact, it’s quite polished – but it takes no creative risks and instead sticks within the confines of its own formula.

From the footage above, you’ve already gained some insight into the visual style of The DioField Chronicles. The game’s aesthetic is quite unique, as its presentation during combat is in the form of miniatures/dioramas, both the environments and the characters themselves. This charming style feels perfectly suited to the Nintendo Switch, and looks particularly attractive in handheld mode on a smaller screen. Whist busy animations feature some slight framerate drops, the game overall runs smoothly and has a visual style that will appeal to lovers of tabletop RPGs.

One of the most notable aspects of The DioField Chronicle is through its stunning art and character design, much of which can be attributed to Isamu Kamikokuryo, known for their incredible art in Final Fantasy XII and the Ivalice Alliance series. This certainly shows in DioField, with detailed portraits and backgrounds during cutscenes resembling renaissance paintings that one might expect to see in a gallery and not in a videogame. Simple cutscenes describing the game’s political turmoil, that might otherwise just be glossed over, instead become the highlights of DioField thanks entirely to their gorgeous designs. 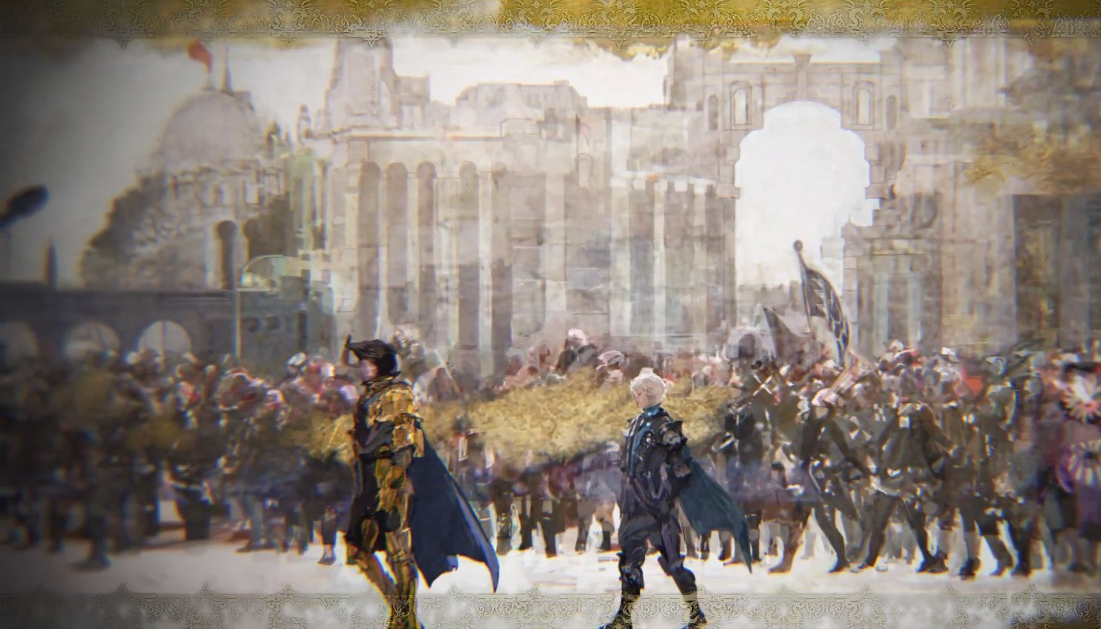 Whether or not you’ve played a strategy videogame, there’s a fair chance you’ve heard the music of Ramin Djawadi, the co-composer of The DioField Chronicles. That’s because Djawadi is one of the most prominent composers of modern TV and cinema, creating the music to epics like Game of Thrones, West World, and even the recent entries in the Gears of War series. Alongside collaborator Brandon Campbell, the pair have crafted a bold and brassy epic score that feels perfectly militaristic and suited to the world of DioField. This truly is the sound of warfare, and elevates the game at every opportunity. Take a listen to some of the game’s most impressive tracks:

“Briefing” accompanies the game’s cutscenes, driving the narrative forward with a strong melody.

Tender, calm, and introspective. Tracks like “The Dust Settles” offer a fleeting moment of respite.

Whilst it’s hard to not gravitate to the epic music of Ramin Djawadi, DioField’s voice acting is also undoubtedly one of its biggest assets. Akin to Xenoblade Chronicles, the voice actors are predominantly of British descent and deliver convincing and enjoyable performances with every line. Their banter in the halls of the Blue Fox headquarters and back-and-forth arguments during cutscenes are a delight to hear. Though strangely, the developers have chosen to include short voice snippets with every single line of unvoiced dialogue, which feels jarring and distracting. Having the option to switch this off entirely would have been useful, as the remainder of the dialogue and narration is excellent.

Upon completing the main story, the player is then given access to New Game+, allowing additional playthroughs while keeping any existing upgrades. Aside from 100% completion and polishing off optional side-quests, there is little incentive to play through the game once again, as the story is entirely linear and offers no sort of branching choices or lasting replayability like that of Triangle Strategy. 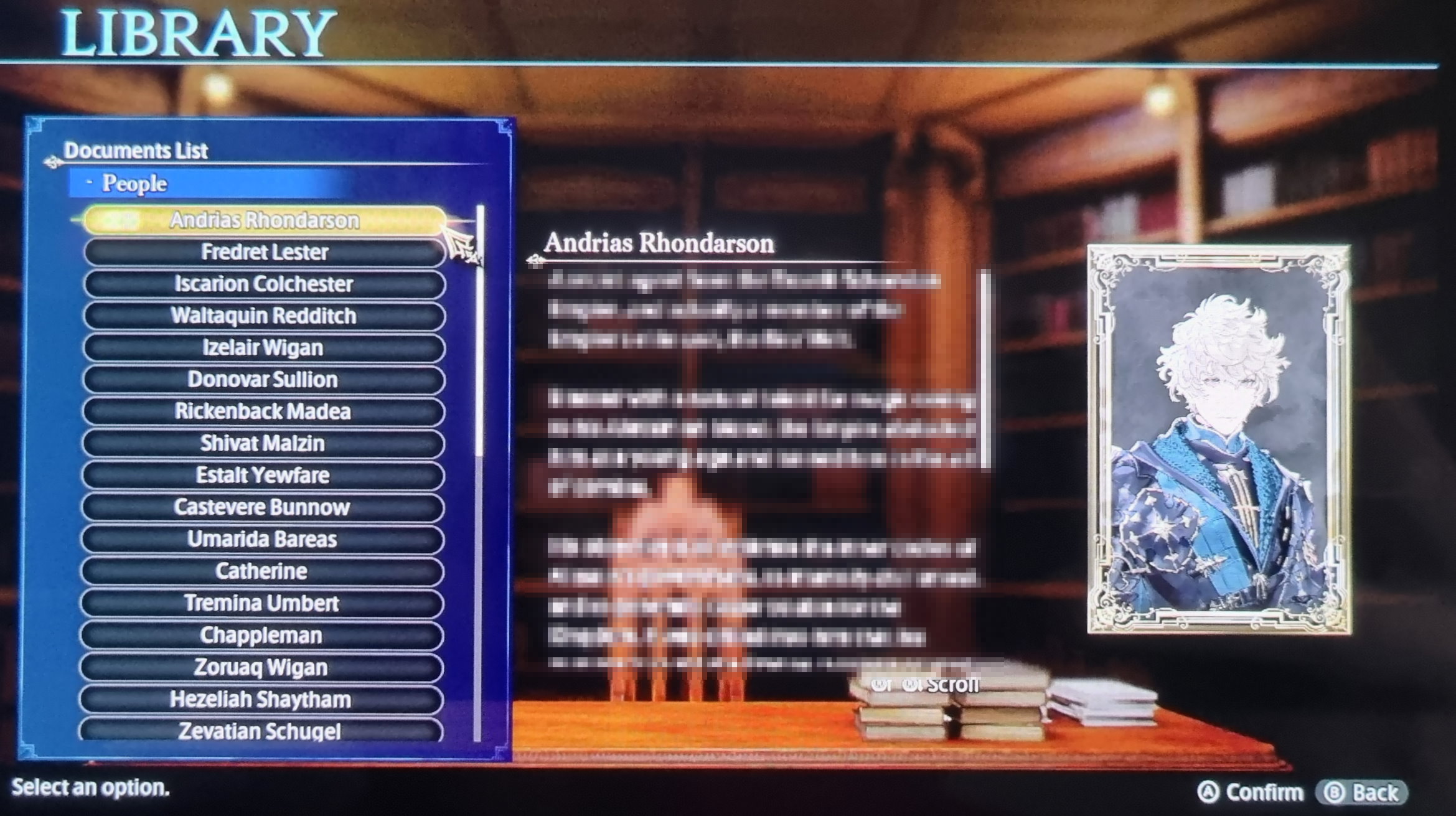 Pixelated for your convenience.

As an added bonus for players who like their games loaded with lore, the library in the Blue Fox HQ is awash with extra information. This compendium contains the history of the continent, its foes and allies, and descriptive pages on every single character even mentioned throughout the game. This detailed guide feels almost as if it could be a standalone companion book, filled with appendices and added snippets to please readers who love political drama and high fantasy. It’s a nice touch for those who enjoy more detail to their games.

So after the narrative masterpiece of Triangle Strategy earlier this year, have Square Enix succeeded with yet another superb story? Despite its attractive presentation and heavy political themes, veterans of the genre will likely find DioField too tame, feeling overly repetitive throughout its roughly 30 hour campaign. The game may instead appeal to newcomers wanting to discover SRPGs thanks to its easily approachable squad-based combat and simple gameplay loop. Overall, The DioField Chronicles is not necessarily a bad game, but is all too unambitious and formulaic to be considered alongside the greats of Square Enix, falling short of its mighty strategy brethren.

A review code on Nintendo Switch was kindly provided by the publisher for the purpose of our DioField Chronicle review. Looking for more strategy games? Check out our Triangle Strategy review for one of the finest strategy titles of the last decade.

You were expecting Fire Emblem, but it was me... Dio! ...Field Chronicle.