Spanning over 35 years and almost 50 games across the series, Square Enix’s Dragon Quest has had a monumental impact in the world of role-playing games. And while the series has always been a staple of gaming in Japan, these charming adventures have only in the last couple decades begun to capture the hearts of players all across the globe. This is thanks in part to many of the series’ brilliant spin-offs, including Dragon Quest Monsters, Dragon Quest Heroes, and the popular Dragon Quest Builders games.

Adding to the list of impressive spin-offs that tie us over between mainline titles, players are once again invited to return to the slimey world of Dragon Quest in Dragon Quest Treasures. Developed by Tose, the team behind cult classics like Rocket Slime and Dragon Quest Monsters: Joker, this humble spin-off is a literal treasure trove of Dragon Quest goodness awaiting dedicated fans of the series. Players might even recognise the familiar faces from Dragon Quest IX and various elements drawn from previous games across the franchise.

So what are you waiting for? Crack open that chest and uncover this precious gem in our Dragon Quest Treasures review!

Deep below the deck of a pirate ship, confined to a tiny room, two young blue-haired adventurers await, longing for the treasures that might await them beyond the horizon. These familiar siblings, Erik and Mia, want nothing more than to escape the clutches of the pirates that have detained them. And through a chance encounter with two mystical creatures, Porrcus and Purrsula, the pair are whisked away to a land they’d only ever dreamed of: the floating continent of Draconia.

This hostile world, inhabited by pesky pirates and malevolent monsters, is also packed to the brim with unimaginable treasure. And the common goal of those who call Draconia home? To amass as much treasure as possible. This is easier said than done, as the continent itself rests upon the remains of two colossal dragons, whose bodies have since turned into a variety of inhospitable environments. Legend has it that spread across the resting colossi are 7 Dragon Stones, mythical treasures that, when united, reveal the path to the greatest treasure of all: La Isla Dorada (The Golden Isle). It’s the most dragon quest of them all!

And so alongside Porrcus and Purrsula, Erik and Mia establish their very own treasure-hunting team, challenging the pirates of Draconia in a race to obtain all 7 Dragon Stones. With the assistance of a multitude of monsters, the pair set off on their very own Dragon Quest! Their adventure leads them across Draconia, all the way from head to tail, unearthing valuable treasure, rebuilding the ruined trans-Draconian railway, and gathering allies at every opportunity. The seven mythical Dragon Stones – a better investment than Bitcoin.

The story of Dragon Quest Treasures is a simple one featuring a cast of charming characters. There are no impressive plot-twists or deep and meaningful narratives, but it’s exactly the kind of story one would expect from a light-hearted RPG and manages to perfectly draw the player into the world of Draconia.

Throughout your romp across Draconia in Dragon Quest Treasures, the game offers three distinct components to its gameplay: exploration, treasure-hunting, and combat. These three gameplay elements are intertwined to create a simple yet satisfying gameplay loop that will keep you coming back time and time again to fill your coffers. So how exactly does this latest spin-off draw upon the best of prior Dragon Quest titles?

Beginning with exploration, easily the most immersive aspect of Dragon Quest Treasures, the player is drawn into an expansive world where every possible location can be explored. Split into 5 separate locales, the game’s world is comprised of two colossal dragons, clearly taking inspiration from another popular JRPG series, Xenoblade Chronicles. Each region, such as the dragons’ head/torso/tail, creates a distinct environment to traverse, scattered with new monsters to encounter and treasures to uncover. “Erik, everything the light touches is our profit.”

While exploring Dragonia, Erik and Mia are aided by three monsters that accompany them at any given time. These range from the series’ iconic Slimes and Drackys all the way through to fearsome Gigantes, Great Sabretooths, and every other monster in-between. And while in your company, these monsters provide skills to help you explore even further. Slimes will bounce you up to greater heights, flying monsters can float you across great distances, and some monsters even help you dive under the ground undetected. This clever incorporation of monsters into the exploration of Treasures makes the journey across Draconia an absolute delight. 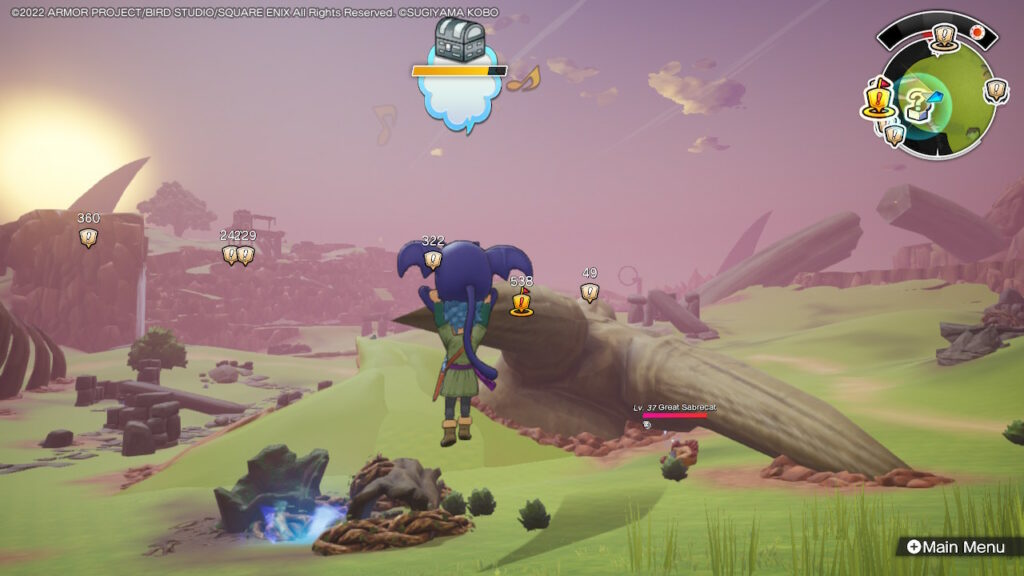 But of course, treasure-hunting is the main reason Erik and Mia are even exploring in the first place. Buried across every inch of Draconia, valuable treasure is beckoning you to uncover it! Though it cannot be seen with the naked eye. Instead, our protagonists possess two magical daggers that act as a compass, guiding them towards the riches beneath the earth. Activating the daggers will point in the general direction of treasure, and once close enough, you’ll be given the exact location through your monsters’ eyes. It’s all about the booty, baby.

Each of your monsters can carry a certain number of treasures and has an aptitude for particular items, varying from statues and weapons through to key items and iconic pieces of plunder. Once completely burdened, players will need to return to their base to add their spoils to the treasure trove. Each treasure is assigned a particular value, and the clan will level-up based on the total value of their treasure list. Levelling up allows you to display more treasures, increasing their value, and even share them with players all over the world through an elaborate game of online hide-and-go-seek. 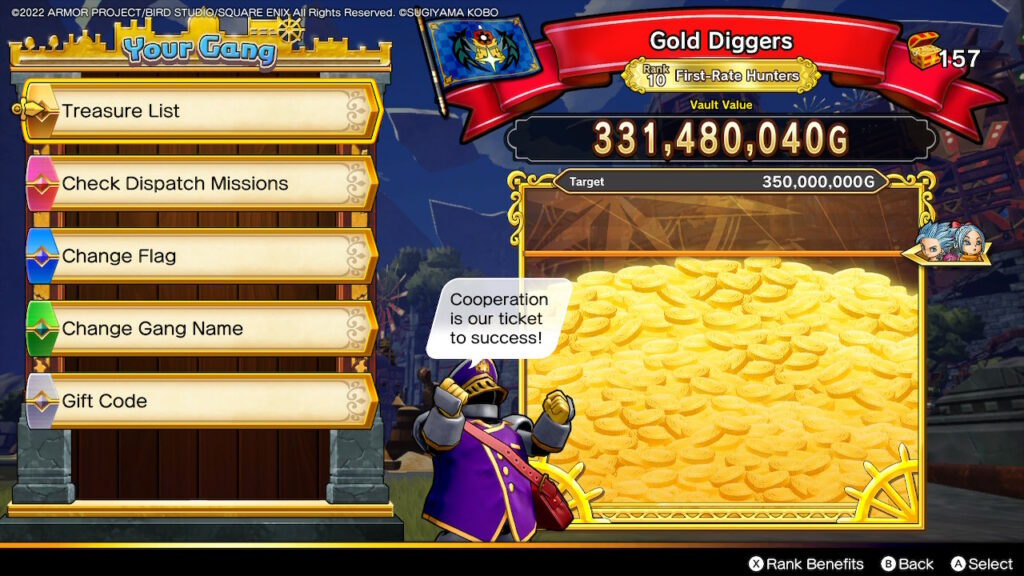 Treasure doesn’t come easily though, as combat is the only way Erik and Mia are able to obtain and defend their bountiful booty. By utilising the monsters at their side and harnessing the power of their magical daggers, the pair are able to take on any foes who stand in their way. This might feel familiar to those of you who have played the Dragon Quest Monsters series, as encounters in Treasures rely heavily on recruiting and dispatching monsters to aide you in battle. Each monster has certain strengths, elemental weaknesses, and abilities that are used automatically. Once an enemy monster has been defeated, there’s also a chance it will want to join your clan, and can be recruited back at base in exchange for certain ingredients that can be gathered across the continent. Eventually, you’ll amass an army of monsters that can be freely swapped based on the situation, or even sent off on their own missions to obtain rare items. It’s not just about the monsters through! When in battle, Erik and Mia are given access to a powerful catapault (slingshot) capable of firing a variety of elemental pellets. Rather than casting spells like Sizz or Crack, each pellet represents an element and can be used to your advantage in battle from a distance. Certain pellets will heal your party, provide them with buffs, or even boost the chance of an enemy wanting to join your team. It’s incredibly simple and approachable combat that at times provides a challenge even to seasoned players. 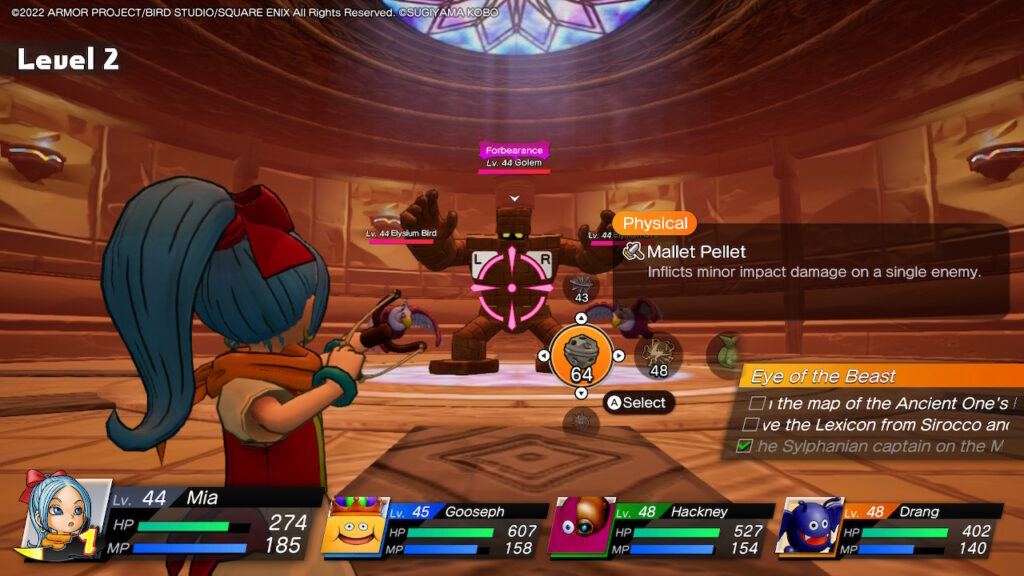 Aim for the (block) head.

Overall, the gameplay of Dragon Quest Treasures crafts an action-RPG style that aims to be approachable for all players. Venturing forth to gather treasure, utilising monsters to your advantage through both exploration and combat, and seeing your haul of gold grow over time is simple yet incredibly satisfying.

After the visual nightmare that was Pokémon Scarlet, following up with Dragon Quest Treasures was a pleasant surprise. While unable to match the impressive detail of Dragon Quest XI, Treasures sets a more stylised cel-shaded aesthetic through both its characters and world that feels perfectly suited to its light-hearted gameplay. The clean visual style of Draconia too helps each environment to feel genuinely expansive, reminiscent of the Mechonis and Bionis in Xenoblade.

Those familiar with the series will appreciate the impressive number of visual references and easter eggs scatted throughout Treasures, with plenty of nods to other games through its items, characters, and even collectibles. Overall, performance in both docked and handheld mode is adequate too, with only occasional framerate drops during very busy combat encounters. Many of the treasures are references to previous games in the series.

For videogame music aficionados, don’t go into Dragon Quest Treasures expecting anything new. In fact, there are barely any original tracks that feature across the entire game. With series’ composer, Koichi Sugiyama, having passed away last year, the team instead choose to draw upon an existing library of tracks from across the series. The delightfully catching music from entries like Dragon Quest IV, VIII, and IX makes an appearance, with many of my favourites featuring in the soundtrack. Here are a couple you’ll hear quite a bit of:

The sound of pure adventure in Endless World from Dragon Quest II.

Soaring in the Sky on a magical train from Dragon Quest IX.

And although this is a spin-off, it must be a reasonably high budget one, as the game has a considerable amount of voice acting in both Japanese and English. Having played through both, the English voice acting gets old very quickly, with accents that are painfully difficult to listen to and voice with about as much substance as a slime. It makes sense given the game’s comedic nature, but seriously detracts from the overall enjoyment. The Japanese voices thankfully sound far more authentic and suited to each character and monster, so having the ability to swap to this audio track alleviates the issue.

Once the Dragon Stones have been gathered and our protagonists have amassed a literal mountain of treasure, there’s still plenty more to do in Dragon Quest Treasures! Where the main story can be easily finished in 20 – 25, there’s an easy 100+ hours of content for players who want the most out of their JRPGs. The biggest chunk of this is in tracking down treasures, with the game featuring 900+ treasures total, many of which are delightfully charming nods to other games in the series. Try to trounce the toughest terrors to take their tantalising treasures!

There’s also a multitude of optional side-quests throughout the game, giving the player access to rare items and the opportunity to recruit unusual varieties of monsters. Additional quests are unlocked in the post-game, with more challenging tasks and precarious locations to explore across Draconia. Players can also engage in asynchronous online play by hiding and seeking treasures with other players online, or sending your own monsters and treasures to other players’ bases to accrue even more value. Dragon Quest Treasures is a real gem of a spin-off that will delight any fan of the Dragon Quest series. Those who grew up playing Dragon Quest Monsters will have the most appreciation for Treasures, which pays homage to and modernises the gameplay of this fan-favourite series. Through its approachable combat and expansive exploration, Treasures manages to create a simple yet addictive adventure that’s truly worth its weight in gold.

Get the best deal on a copy of Dragon Quest Treasures here!

Maybe the real treasure was the friends we made along the way.