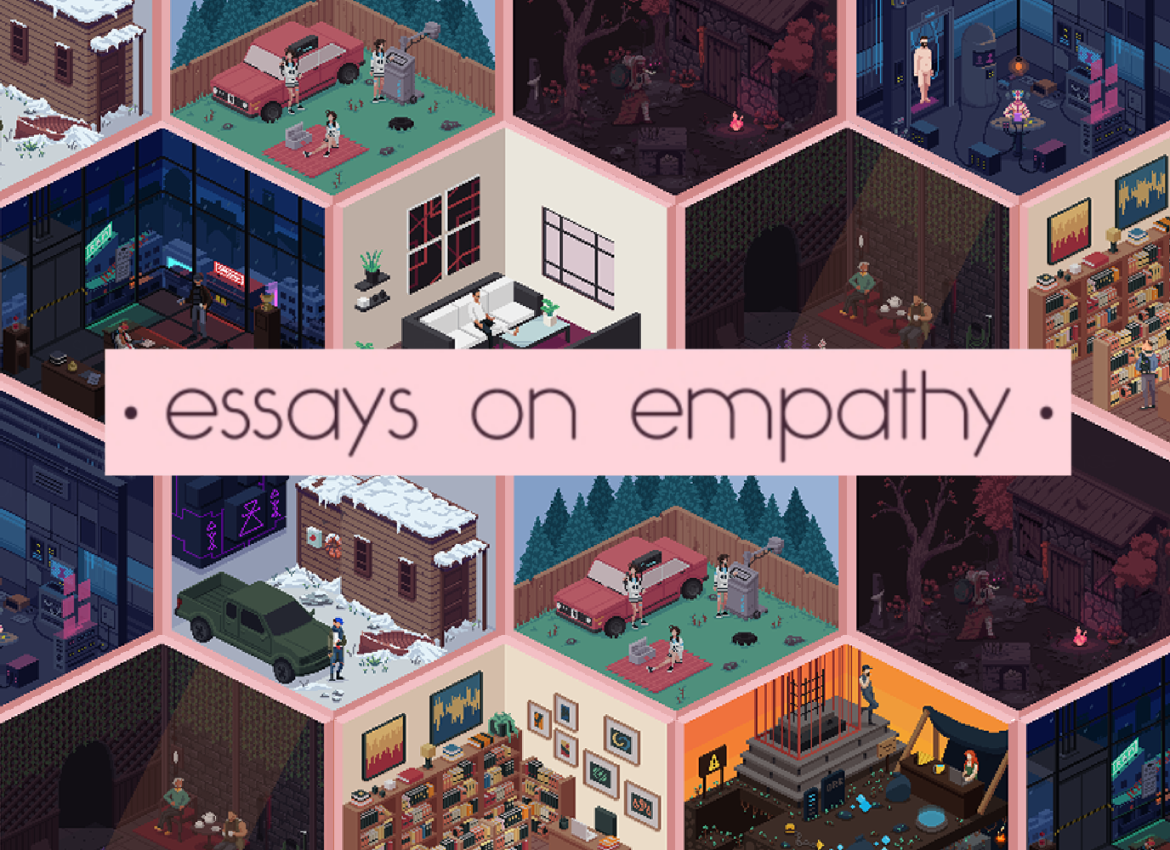 Deconstructeam – maybe you’ve heard the name? Based in Valencia, Spain, this close-knit indie game developer consists of three key members, known for creating intimate, emotive narrative games, now in collaboration with Devolver Digital. Weaving stories with important messages conveyed through experimental formats, the studio has been widely-recognised for their games, “Gods Will Be Watching” (PC) and “The Red Strings Club” (Nintendo Switch, PC). While many of us play indie videogames on a daily basis for enjoyment, challenge, or entertainment, how often do we truly gain the opportunity to delve deeper into the motivations and thoughts behind the creative minds that concoct these experiences?

This is where Essays on Empathy fills a void. Through a hybrid format of videogames and short video documentaries, the player is taken on a journey into Deconstructeam’s past and present through 10 unique, individual standalone experiences. From a game as simple as picking the right book for a birthday present, all the way through to heart-wrenching human relationships and painful emotional experiences, there is one concept that flows through each game in this collection: empathy.

Accompanying each experience is a 10 – 15 minute dissection from the developers, who explain their creative processes, motivations, and most importantly, the messages and challenges behind the game’s creation. When consumed by a gripping videogame, it’s too easy to forget that these are all experiences for which real people are responsible, something Essays on Empathy expertly emphasises.

So what exactly are the games on offer in this captivating collection?
Let me break it down into its ten components:

In what feels like the odd game out in the collection (as it’s far more focused on gameplay), you’re tasked with collecting enough ore to rebuild a rocket to make your way off this desolate planet. Though a simple game initially made for a Game Jam in 2015, it features some creative platforming puzzles that feel right at home in the genre.

Bold, atmospheric, gripping and clever. Supercontinent Ltd is a narrative-heavy cyberpunk experience that will leave you thirsty for more. Playing as Brandeis (a character who also appears in The Red Strings Club), this game revolves around the use of ancient technology: a landline phone. Through use of a voice modulator (VOMOD), Brandeis makes phone calls to unravel the plot behind a mysterious organisation on the evening of their plan to overthrow the police force.

With its engaging dialogue, gloomy pixel-art aesthetic, and ambient synth soundtrack, this game oozes style from every pixel. Impressively, Supercontinent somehow manages to achieve more character development and world-building in thirty minutes than games like Cyberpunk 2077 do in their entire narrative. Thirty minutes well spent.

Behind Every Great One (Genre: Drama/Narrative)

Riding on a high from Supercontinent, I jumped straight into the next game. I was not prepared for what I was about to feel. This game is, at times, mentally and emotionally difficult to play. Interestingly, the developers too discuss how difficult this game was to create. If you’re not in a good headspace, I would approach Behind Every Great One with caution. It will make you feel like absolute shit.

You play as Victorine, the housewife to Gabriel, who is a renowned and celebrated artist. Living in his shadow, life has become a monotonous repetition of household chores and meaningless attempts at activity devoid of passion, interspersed with frequent anxiety attacks. The story becomes progressively more depressing as you delve deeper into the characters’ broken relationship and expectations of Victorine. It’s a highly emotive and confronting game that is not for the faint of heart.

An injured hitman loses his arm in an attack and is forced to seek refuge in the house of a florist called Sebastian, with whom he builds a relationship during their short time together. Learning the art of flower arrangement and the messages the blooms convey, Gordon is able to delve deeper into his own emotions and relationships. A highly emotive narrative that explores raw human emotion and the fragile elements that reside within even the most harsh exteriors.

My favourite in the collection. Several times it even had me on the verge of tears. An impressive feat for a game that can easily be completed in half an hour. Though the game may be short, choices based on your flower arrangements will dramatically affect the outcome.

Simplistic and charming; more of a minigame than a proper standalone title. Pick a comic book from the shelf at a bookstore to purchase as a birthday present for your father! This game was created as a birthday gift alongside a friend of the developers and features amusing cover art, genre stereotypes, and mocking of internet trolls.

Zen and the Art of Transhumanism (Genre: Sci-Fi/Narrative)

Pottery meets Cyberpunk in a genre mash-up I never thought I’d encounter. As a new member of a human improvement workshop, you’re tasked with creating body modifications to fulfil your client’s needs. By handcrafting differently-shaped mods, you’ll be able to enhance certain physical traits and oblige the wishes of the often-selfish humans.

Another incredibly stylish game with an odd concept – this intriguing pottery-crafting gameplay re-appears in The Red Strings Club as a major gameplay mechanic. But does crafting your body into the ideal traits really lead to true fulfilment?

In my opinion the least-enjoyable game in the entire collection. Set in the real life small mountain town of Engolasters, the protagonist (whose son has just run away from home) stumbles across extra-terrestrial life which offers to bestow great power. She must make a choice to save her son, herself, or unravel the secrets that lure her into the unknown. Afflicted by a wound and slowly losing blood, players must manage their life, phone battery, and car fuel while exploring the frosty overworld. The overworld is vast, empty, and lacking in direction, which led me to become easily frustrated.

The most interesting concept out of all the games: what if your skeleton didn’t belong to you? This simple point-and-click game explores the topic of body image and acceptance. By stealing an x-ray machine and fleeing to the country, the protagonist discovers more about herself by looking inside. Literally. X-rays reveal implants, evidence of past trauma, and pieces that seem mismatched and out of place. Once located, any foreign body parts must be forcibly removed through the use of pliers or scalpels. Not for the squeamish! Players can choose dialogue that will vary the consequences of the story, weaving an entertaining, introspective narrative with a stylish visual aesthetic.

For a moment I could have sworn I was playing something straight out of Bloodborne! This title is melancholy, chilling, and is dripping with disturbing atmosphere like a blood-soaked cloth. Exploring a decrepit and dilapidated town, you are the Coppersmith, an immortal artisan who harvests the organs of townspeople in exchange for fulfilling their requests through blood magic. By interrogating the residents, you can perceive their selfish desires and choose to either fulfil or sabotage them.

Dark and brooding narrative alongside macabre art and music make this one of the most memorable titles in the collection, and leaves me thirsting for more. The inspiration behind this title is particularly interesting, as the creator draws upon a method that you’re unlikely to expect. Watch the documentary to find out!

The main feature of this collection, a game that translates to “Three for a Quarter” (e.g. something of such poor quality that you can buy three of them for a single quarter), also the name of the comedy duo that you play as during this game. Garza and Bonachera are two halves of a failing comedy act, two lovers, and two grown men struggling for success, stumbling over the hurdles of their passions and their relationship. The story here is particularly personal to the developers, as it emphasises the harsh reality of making a living off of a creative pastime. Conversations between the characters are deeply intimate and allow the player to dive beneath the surface by revealing the characters’ inner thoughts on a separate area of the screen.

Gameplay is incredibly creative and unlike anything I’ve played, combining aspects of deckbuilding games with comedy dialogue, allowing you to attempt to earn coins to improve your deck. Cards will either build upon a joke, execute a hilarious punchline, or fail miserably and embarrass yourself in front of an entire crowd. Not only is it fun to play, but many of the jokes are legitimately amusing and it’s quite satisfying to be able to slowly improve your confidence with each show.

Des Tres al Cuatro is, in my opinion, the best game in the entire collection, as it offers the perfect balance of innovative gameplay and insightful dialogue, and is an experience that is enjoyable every minute from start to finish. If you’re interested in Essays on Empathy, it’s worth it just for this alone.

A vast amount of passion has been poured into crafting these short but powerful games, which becomes even more apparent while watching the developers discuss each title in their respective documentaries. Thoughtfully reflective, introspective and emotive, Essays on Empathy is 50% videogame, 50% documentary, and 100% heart. If you’re the kind of person who plays videogames not only for enjoyment, but for deep narratives, important messages, or artistic expression, then this is an essential experience. And really, couldn’t everyone benefit from just a bit of extra empathy?

So, why shouldn’t you play it?

Essays of Empathy is available now on PC via Steam.
Find out more about the game here: https://store.steampowered.com/app/1586880/Essays_on_Empathy/

A review code was provided for the purpose of this review.
You can read more of our reviews HERE or over over at Gaming News Australia.

Essays on Empathy is thoughtfully reflective, introspective and emotive; 50% videogame, 50% documentary, and 100% heart.