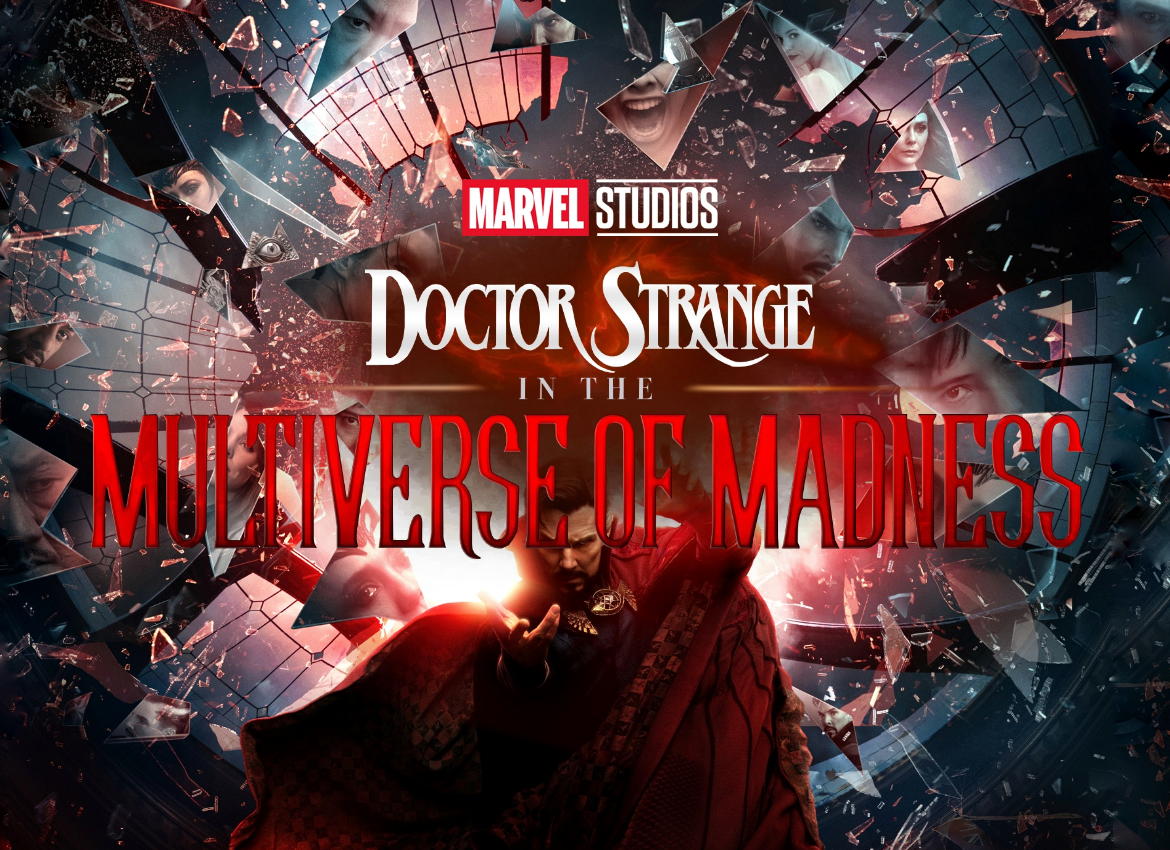 Since his very first appearance way back in 1963, Doctor Strange has quite literally added a touch of magic to the Marvel universe. Making his MCU film debut in 2016, Dr Stephen Strange, M.D, Ph.D, transformed from a brilliantly talented, egotistical surgeon to the character we now have come to know as Master of the Mystic Arts and protector of the New York Sanctum. Offering viewers a visual trip through Strange’s self-discovery and enlightenment, Doctor Strange still remains my all-time favourite MCU entry. So what happens when Marvel decides to make Strange even stranger? Featuring a wide cast of characters both familiar and unusual, a generous serving of fan service, and the infinite possibilities of alternate dimensions, it’s time to conjure a portal to the Multiverse of Madness in Marvel’s latest superhero epic.

The Multiverse – anyone who’s watched a Marvel movie in the last few years, or even just Spider-Man: No Way Home, would be familiar with the concept. An infinite number of alternate realities running in parallel, each with their own unique versions of our universe’s inhabitants. These possibilities also create alternate scenarios that would affect life itself. Imagine a universe where Thanos won? How about a universe where everything is made entirely of paint? Or even a universe where Earth has been reduced to a desolate wasteland? If you can dream it, there’s a universe for it.

Sprawling interdimensional worlds are the centrepiece of the Multiverse of Madness.

The Multiverse of Madness has this exact concept at its core, with Doctor Strange (Benedict Cumberpatch) leaping from one world to the next in a journey to save our universe and everyone in it. Supported by America Chavez (Xochitl Gomez), a confused young superhero with mysterious powers beyond her own control, this unlikely duo encounter otherworldly threats both friend and foe alike. Having featured in the popular miniseries “WandaVision“, Wanda Maximoff (Elizabeth Olsen) carries the plot forward with touches of genuine emotion during the film’s more contemplative sequences. Her alter ego, The Scarlet Witch on the other hand, offers a horrific and headstrong force to be reckoned with.

Don’t mess with the Wong guy.

Without giving too much away, the interdimensional leaps are the key to the film’s two hour trip into chaos, for without this, the plot would simply be a generic retelling of the age-old good vs. evil action story. In contrast with the initial Doctor Strange film, Multiverse of Madness features minimal exposition and instead chooses to focus primarily on frantic fast-paced action, thrilling chase sequences, and a decent amount of fan-service along the way.

Once again assuming the lead role, Benedict Cumberpatch as Doctor Strange is just as compelling as ever, balancing his massive ego with equally massive power. Most fascinating about Multiverse of Madness is that Cumberpatch plays more than just his own role! Viewers are treated to several distinct performances from the film’s lead actor, each with their own unique quirks and powers. This is similar for several other characters throughout the film, each of whom portray more than a single version of themselves with thrilling consequences.

Bet the enemy never saw this one coming.

As a support character but also pivotal to the entire film, Xochitl Gomez plays “America Chavez” with an unsure and doubtful attitude befitting of a rookie superhero cast into another world. While her portrayal might not be as forceful as the fan-favourite recurring characters scattered throughout the film, America’s character development and growth in the Multiverse of Madness sets up this character for future appearances in the Marvel Cinematic Universe.

America Chavez is the latest addition to the MCU’s already massive roster.

Notably, the film has a drastically different tone and style to the Doctor Strange we have previously known. Where the initial film was a mystical and experimental trip, Multiverse of Madness strays away from this established style significantly, at points barely feeling like a sequel at all. Many of the series’ most gruesome, graphic, and horrific sequences feature in Multiverse of Madness, leaving the film at times feeling more like a supernatural thriller. This new direction is consistent with previous works of director Sam Raimi, whose beloved early 2000s Spider-Man trilogy helped to cement the popularity of the superhero genre among modern films. It’s worth noting that viewers expecting a whacky and amusing trip through alternate realities may be caught off-guard by the film’s mature and serious nature.

One aspect where Doctor Strange stands head and shoulders (and cape) above the most of the Marvel Universe is through its impressive CGI visuals. As the mystic arts are now combined with a visual suite of alternate realities, Multiverse of Madness offers viewers some of the most stunning visual sequences to date. From even the first few seconds of the film, it should come as no surprise that the imagery in this Strange sequel is a visual marvel from start to finish.

Albeit not quite as trippy as the mind-bending “mirror dimension” sequences of the first film, Multiverse of Madness instead relies on the varied environments of its alternate realities to impress its viewers. Each environment carries a distinct visual style which changes drastically between each multiverse, providing simple visual cues to follow the film through its stylish and sometimes horrifying worlds. Action sequences too are captivating, varying from small yet tense encounters in enclosed spaces wall the way through to interdimensional battles with colossal foes.

At times the film both looks and feels more like a horror movie than a superhero flick.

As mentioned earlier, this is Marvel at its most graphic. Certain scenes depict graphic violence that one might expect to see in something like Mortal Kombat as opposed to a Marvel film. This is clearly aimed toward a more mature audience, which resonates throughout many of the adult themes explored in the film and its dark scenes.

Disappointingly, the superb score by masterful composer Michael Giacchino (The Incredibles, Spider-Man: No Way Home) does not return for the sequel. Where the initial film featured mystical sitar, distorted guitar, and even elements of Prog Rock weaved into its epic soundtrack, the music of Multiverse of Madness will not leave an impression on most viewers. Though veteran film composer Danny Elfman has crafted a massive orchestral score with sweeping themes and bombastic battle music, there are sadly few standout tracks. The music of Multiverse of Madness certainly supports the action and themes of the film, but is overall immemorable and fails to elevate the experience like the that of its predecessor. Take a listen to the title track, which is fairly representative of most of the film’s score:

The audio on the other hand is exactly what viewers have come to expect from Marvel Studios, who have perfected the sound of the superhero genre. Every sound effect delivers a distinct hit, with fight scenes as thrilling to the ears as they appear on screen. One particular fight scene which appear later in the film makes incredibly clever use of sound and music, which will undoubtedly delight any classical music fan in the audience. Be sure to listen out for that one!

So is this the ambitious multiverse crossover film that Marvel fans have been waiting decades for? Not quite, it’s but a mere appetiser for the full main course of the Multiverse. Featuring a wide cast of iconic characters, serious themes and dark tones, and an impressive visual barrage of CGI, Doctor Strange in the Multiverse of Madness is certainly essential viewing for any Marvel fan. But where its action and fan-service go above and beyond, it lacks the charm and mysticism that made Stephen Strange’s first outing so memorable. For students of the Mystic Arts, you’re not likely to leave the cinema feeling elevated or enlightened, but as a Marvel fan, the Multiverse of Madness will swallow you whole through its wild interdimensional ride.

So why should you watch it?

A preview screening was kindly provided by Marvel Australia for the purpose of this review.

May 4, 2022
Film Review – Doctor Strange in the Multiverse of Madness

Marvel goes from Strange to stranger in the Multiverse of Madness.