We truly are living in the midst of a Viking renaissance. Thanks to popular culture like film, TV, and videogames, the era of Norse Mythology, with its brutal raiding and violent conquest, is somehow more popular than ever. The influence of this age is glaringly obvious through critically-acclaimed TV series like Vikings, games like Assassin’s Creed: Valhalla and 2018’s Norse-inspired God of War. Even Marvel superhero culture draws much of its inspiration from Viking expeditions and their vast mythology and its powerful Gods. To add to the ever-growing list of gripping Viking media, director Robert Eggers (The Witch (2015), The Lighthouse (2019)), unleashes his visionary style in the most bloodthirsty way possible in his latest creation: The Northman. Sporting an impressive cast of widely-respected actors, from film veterans like Willem Dafoe and Nicole Kidman, through to the up-and-coming younger actors of Alexander Skargard and Anya Taylor-Joy, Eggers morphs his heavily stylised and dramatic cinematography into a thrilling tale of one man’s unabated lust for revenge. Though this isn’t purely just enraged Vikings enacting gory fight scenes – there is far more to The Northman, as elements of the supernatural are weaved throughout the otherwise simple story. So grab your nearest horn of mead, skol the entire thing, and enjoy our very first film review for…

Revenge courses through every single vein in young Prince Amleth’s body – a young heir to a prosperous Viking kingdom who sees his own father killed in front of him. From that moment onwards, he has only three motivations in his entire life: avenge his father, rescue his mother, and slaughter his father’s murderer. Escaping near-death and fleeing to the land across the sea, the young and frail boy eventually develops into a fearsome and bloodthirsty Viking berserker. 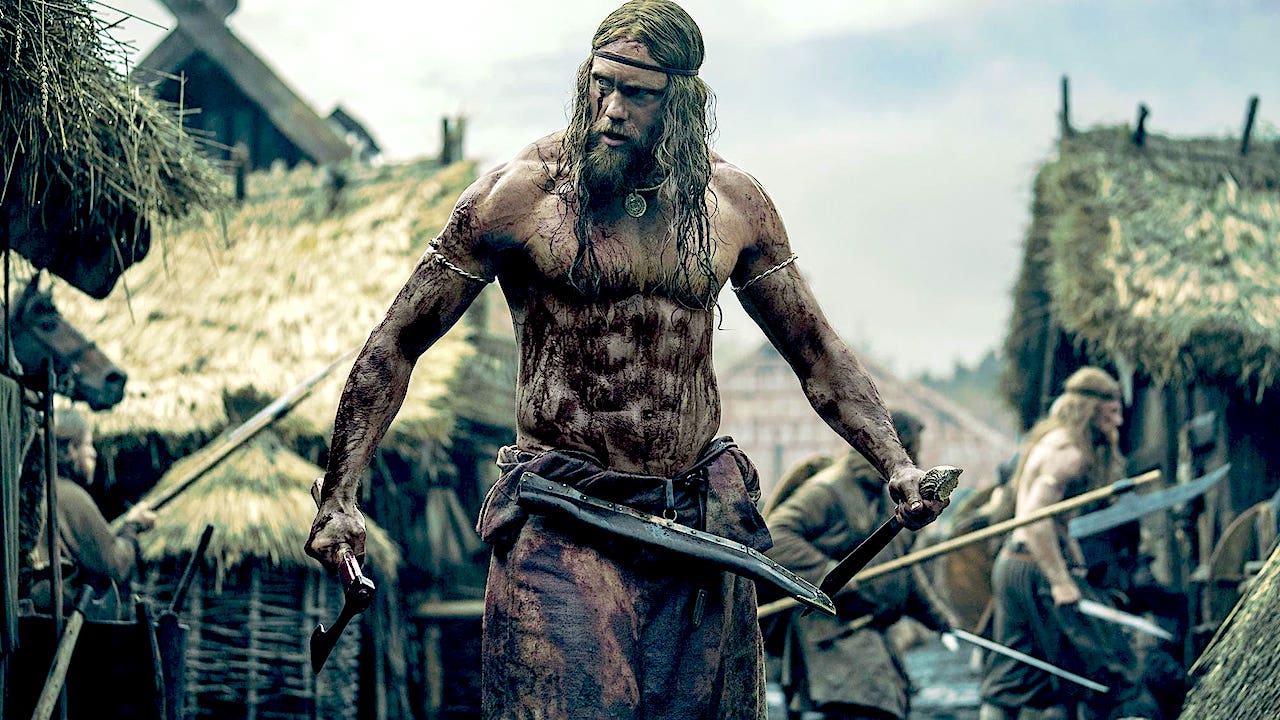 Who needs a shirt when you can wear the blood of your enemies?

Though he cannot escape his fate. Every single action Amleth makes leads him one step closer to his quest for revenge. After a chance encounter with a mystical Seer, the path toward avenging his father is made clear and so the mighty warrior sets off alone, relinquishing his Viking status and instead casting himself into slavery. It’s as a slave that he meets Olga, a fair maiden of pure white hair and an air of mystery about her. Together, this pair must exact revenge, overthrow the slavers, and hunt down the man who destroyed Amleth’s life.

While there are moments where the plot can be quite predictable, this is occasionally subverted through the addition of dream and hallucination sequences that are scattered throughout the film. Though these only make up a fraction of The Northman’s story, these short glimpses offer an element of the supernatural and mythological to an otherwise straight-forward story of revenge without feeling obtrusive or detracting from the overall authenticity of the film.

If you’ve experienced any of Robert Egger’s previous films, you’ll be prepared for an experience that doesn’t follow the norms of Hollywood film-making. While many Viking films might seek to emphasise the gruesome violence and clashes between warring factions, or maybe the underlying mythology of the Norse folk, The Northman instead aims its focus on a single man and his own motivation. Amleth channels the beast within. Though that beast looks on the outside to me…

Taking centre stage, Alexander Skarsgard as Prince Amleth convincingly becomes an unstoppable force who will stop at nothing until he has wrought vengeance. While quiet and unassuming throughout much of the film, The Northman truly comes alive when the Beast inside of Amleth is unleashed. His portrayal of a mighty warrior certainly lives up to the reputation of the Vikings, as fight scenes are choreographed with a manic berserker style and an impact that contrasts with the calmer portions of the film. Many of these scenes, while dynamic, have a gritty realism to them, and those not fond of realistic violence may be left cringing during certain gory moments.

Action sequences are brutal and incredibly violent. Just how Vikings like it.

While the fight scenes are the supporting pillar of The Northman, the film’s unusual vision sequences help to give the film some additional substance. These short portions of dreamlike hallucinations often involving supporting characters make significant use of one-shots and close-ups of each character with a significantly different, sometimes disturbing, style that contrasts to the remainder of the film. These can be intense and at times even slightly unnerving, but they set The Northman apart from just being another generic historic action flick.

It goes without saying that a Robert Eggers film is bound to have a unique visual style, and that is certainly the case too for The Northman. While not to the extent of some of his previous films, the cinematography throughout makes significant use of darkness and bold colours contrasting against it. Much of the film plays out in darkness lit by the warm glow of a fire and characters bathed in blood, and does so with a gritty aesthetic that will convince viewers that this is not acting but a historical event. Aside from the occasional strange dream sequence or snippets of Norse mythology scattered throughout, much of the film has an incredibly realistic visual style. The films adds a touch of the supernatural to keep its visual style interesting.

Special mention must be given to those who created the props and sets in this film, as they appear aged, weathered, and as if they were being filmed a thousand years in the past. Filmed primarily in Ireland, the scenery is breath-taking and expansive, which contrasts against the film’s dingy and run-down village sets soon to be coated in their inhabitant’s blood. Particular moments of the film have a spectacular visual style that seriously stands out, especially the final scenes of the film, but they do seem somewhat jarring against the remainder its visuals.

Arguably the most impressive aspect of The Northman is its sound; every single moment is an auditory delight. From the haunting howling and rabid growls of the Vikings who hunger for violence, the clanging of swords against shields, the rhythmic drums of war and the terrified screams of the citizens. Expertly-crafted atmospheric sound effects coupled with superbly convincing acting and delivery make for an experience that simply must be heard in cinema (or at least on a very good sound system).

This is accompanied by a truly phenomenal soundtrack – music so gripping that it actually managed to distract me entirely from the rest of the film at some points. Composed by Robin Carolin & Sebastian Gainsborough as his first ever soundtrack (HOW?), tracks utilise a varied ensemble of instruments that deliver not necessarily an authenic Viking sound, but a Scandinavian style that still matches the setting perfectly. Intense rhythmic percussion and guttural male choirs coupled with harsh yet beautiful strings and occasional pipes create a soundtrack with an auditory style akin to much of the music you might have heard in The Witcher 3: Wild Hunt. Considering that’s one of the best game soundtracks to date, that’s a testament to the quality of The Northman’s score. Take a listen to track above!

If you’re expecting epic battles, huge raids, and over-the-top combat on a massive scale, then The Northman might come as quite a surprise. This gripping tale of vengeance littered with bloodshed and brutal slaughter focuses entirely on the plight of a single man and does so with an incredible style. Eggers once again proves that he has the ability to take a genre or a topic and make it entirely his own, and that can be seen throughout The Northman from start to finish. Compelling acting, phenomenal sound effects and score, and a distinct visual style emphasising the brutal fight scenes all make for one of 2022’s finest films. If you plan on making it to Valhalla, make sure to watch The Northman before you do.

But why wouldn’t you watch it?

A preview screening of The Northman was kindly provided by Universal Pictures for the purpose of this review.

Conquer your fate and seek vengeance in this brutal and bloodthirsty tale of Viking revenge.