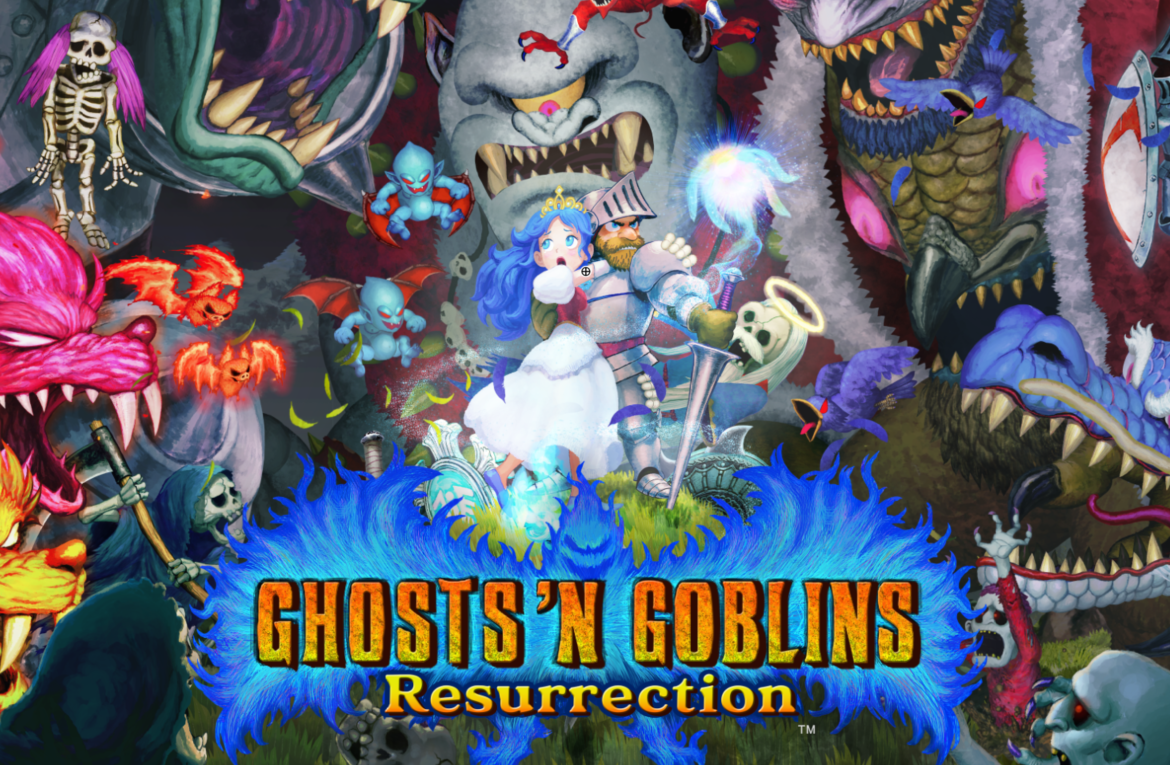 If you grew up playing video games in the ’80s or ’90s, chances are you had some exposure to the Ghosts ‘n Goblins series: a side-scrolling platformer known for its notoriously brutal difficulty, unforgiving gameplay, and protagonist Arthur who strips down to his boxers to rescue his beloved princess. What started as an arcade game (no doubt designed to chew through unsuspecting children’s quarters) eventually gained enough popularity to garner entries on almost every gaming platform ever made, as well as numerous spin-off games (including the much-beloved Gargoyle’s Quest/Demon’s Crest).

Well, for those masochists out there that played the previous games and didn’t drown in a pool of their own tears, or crumble under the sheer weight of their own shame, the series has been Resurrected and finds its way onto Nintendo Switch with a brand new entry: Ghosts ‘n Goblins Resurrection.

Do you play a Ghosts ‘n Goblins game for the plot? Of course not. Though they still added one anyway. Like a storybook, the game quite literally unfolds in a scroll to reveal Arthur and Princess Guinevere enjoying stroll on a grassy knoll (as royalty are oft to do), when the helpless Princess is picked up and carried away by demonic forces. Princesses have a tendency to get into situations like this, because why else would our heroic protagonist venture through so many treacherous circumstances if not for love? It’s cliché, and almost identical to all the previous games, but this doesn’t really detract from the game in any way.

In order to save the Princess, you’re required to navigate through numerous hazard-filled levels, scattered with demonic forces who will stop at nothing to break Arthur’s armour and see him humiliated in his boxer shorts. It’s a simple premise that newcomers will find easily approachable and does not stray far from the original formula, which will please series veterans.

If it ain’t broke, don’t fix it. And Capcom has done just that: changed very little in Resurrection. Gameplay is what you would expect from the series, with multiple challenging levels combining tricky platforming with punishing enemy placement, and massive boss fights that will have you almost throwing your controllers in frustration. Arthur can take multiple hits as his armour dismantles, however powerups are plentiful and seem strategically-placed alongside checkpoints to help you with some of the more difficult segments.

Combat is a crucial aspect of Ghosts ‘n Goblins – you are given access to 8 different weapons which are dropped at random by enemies or found in chests throughout the level. Some have significant reach like the lance, while others hit closer but deal heavy damage like the hammer, as a result you will have to choose the best weapon for your situation. You’re also locked into attacking in only four directions adding to the retro feel of the game. Though this combat might feel archaic in any other brand new game, it seems fitting for Resurrection, as the gameplay feels just as it did decades ago.

Some neat additions have been included in Resurrection, most notably its adjustable difficulty. The player can choose difficulty (Page -> Squire -> Knight -> Legend) at the beginning of a level and on the fly. After dying you’ll be prompted whether you’d like to swap to an easier difficulty. It’s nice to have the option, even if I ignored it the entire time for risk of damaging my own pride.

Levels are now scattered with Umbral Bees, which appear like floating spirits that can be collected on contact. Some of these are in very precarious locations, or require quite a bit of skill to collect. These can be spent on a literal skill tree, which will unlock attacks, passive and active abilities that can be used during gameplay. Equipping these to your Magic Waistband will unleash devastating attacks to decimate enemies on-screen, or my personal favourite which duplicates Arthur and any of his attacks.

If you’d rather not suffer alone, you can now die alongside a friend! The addition of a co-op mode lets player two join in as one of spirits, each of which have unique abilities that can aid Arthur in his quest. It’s a simple addition, but if you’ve got somebody willing to assist, it might just give you that extra leg-up you need to overcome a tricky level.

Without a doubt the most unique aspects of the game are its visuals and artistic direction. The entire game, menus, environments, enemies and bosses are all designed as if they belong in a picture book. It can be a bit jarring for those who have played previous Ghouls ‘n Ghosts games and will likely polarise many players. While I found it to be a bit odd at first, the aesthetic soon grew on me and I eventually found it to be not only quite attractive on the small Switch screen, but very fitting considering the level design moves across like an animated scroll.

Where the previous games in the series have been either pixel art or quite simplistic 3D designs, the new art style of Resurrection seems to offer a refreshing take on existing characters/enemies and adds a level of detail not seen in the series.

If you’ve played the previous games, you’re probably more than familiar with many other songs you’ll hear in Resurrection. You’ll probably also have slight PTSD hearing them too. What’s brilliant about the soundtrack to Resurrection is how it incorporates the original chiptunes. In paying homage to many of the original songs, the actual chiptunes play at the same time alongside orchestral rearrangements of the songs. It’s almost as if you took a medieval band and a baroque orchestra and you gave them a Gameboy and said, “play this futuristic instrument.”

Most of the themes loop regularly, and you’ll hear them repeat constantly with each death, but I never found them to be grating. The composers have made music for some notable Capcom titles, including Marvel vs. Capcom, Devil May Cry and Monster Hunter. Overall it’s a short but sweet soundtrack coming in at 35 minutes, but cleverly blends chiptunes into vastly-different musical styles.

Visuals and minor changes aside, Ghosts ‘n Goblins Resurrection brings back classic retro gameplay that feels just as if it could have been released 20 – 30 years ago. Though this may not appeal to some, it’s a game that is fuelled by nostalgia and will certainly please existing fans of the series. In introducing difficulty levels that can be changed on the fly, Resurrection makes the series more approachable for those who aren’t skilled at platformers or become easily frustrated by failure.

A review code was kindly provided by the publisher for the purpose of this review.
You can read more of our reviews HERE or over over at Gaming News Australia.