Here I am once again, reviewing a game with strong links to Japan. I loved both of the Judgement games, and the anime inspired Tales of Arise was my pick for game of the year in 2021. However, my recent escapade through the French made ‘J’ RPG Edge of Eternity left a very sour taste in my mouth.

Ghostwire: Tokyo was first announced as a timed exclusive for the PS5 by Bethesda Softworks at E3 in June 2019, and I was immediately interested by the horror themed action game set in the best city in the world. A lot has changed in the real world since June 2019. Of course there is the ongoing threat of COVID, but in the world of video games we have also seen the purchase of Zenimax by Microsoft. This means that Ghostwire: Tokyo could possibly be the last Bethesda game we ever see on a Sony console. Certainly it is the last exclusive game (timed or permanent) from Bethesda to release on the PlayStation.

Is this swansong from Bethesda the best way to say farewell to Sony? Or is this adventure through the streets of Tokyo more style than substance? Ghostwire: Tokyo starts with one of my favourite sights in the whole world – the bustling streets of Tokyo and the Shibuya scramble crossing. Immediately though, a fog falls upon Shibuya and people start to simply disappear. An unknown entity flies around looking for a deceased body to inhabit that has not yet faded away to fight off the incoming swarm of evil spirits and settles on a young man. This young man, Akito, is not actually dead yet, and an uneasy alliance is formed between him and the entity we come to know only as ‘KK‘. Akito’s focus initially is to find his sister who is in a hospital in the doomed area of Shibuya. KK is looking at the big picture, and wants to find a way to release Shibuya and its citizens from the cursed fog that has appeared. Their goals merge as they realise that the villain at the centre of Shibuya’s malaise, known as Hannya, has actually kidnapped Akito’s sister and she is part of his evil plot to use the souls of the Vanished citizens to somehow resurrect his lost family. Hmm, maybe this is the villain? Not sure though.

To complete their quest, Akito and KK need to push through the hordes of faceless “Visitors” – evil spirits that now inhabit the otherwise dead streets of Shibuya. No tourists? Must be due to Covid.

There are plenty of collectibles littered throughout the city that provide context to both the history of KK and why he is so focussed on his mission. These collectibles also provide motivation for the discerning Japanophile to hunt them down and find the literally hundreds of references here to Japanese culture from Daruma and Maneki-Neko to the cursed tape from Ringu (The Ring). 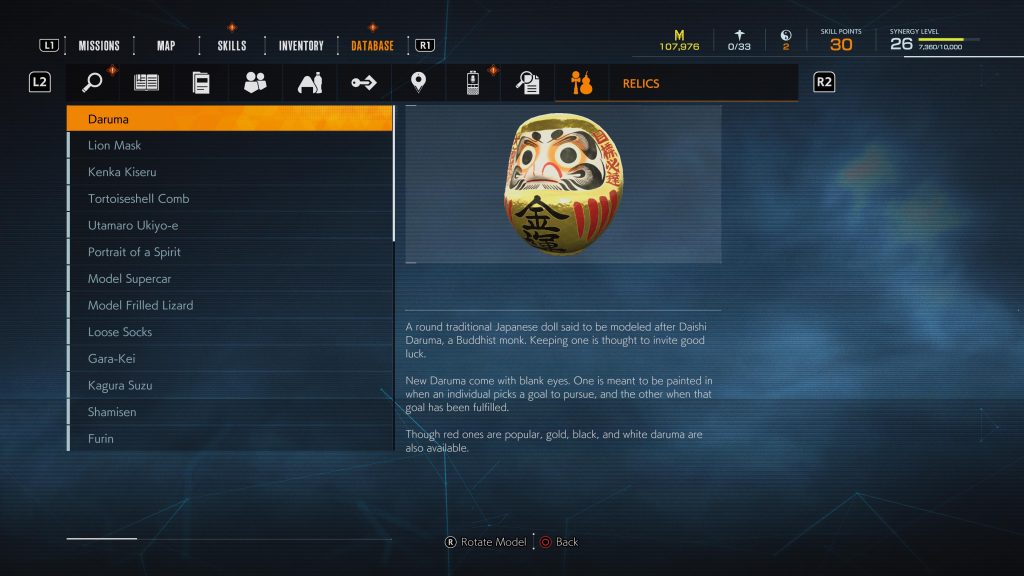 The plot here is not complex in terms of overall themes – there is nothing ground-breaking here, no mysterious twists to shock you. Sometimes simple is good though – the laser-like focus of Ghostwire means that you can focus on the best character in the game – Shibuya and the city of Tokyo itself. 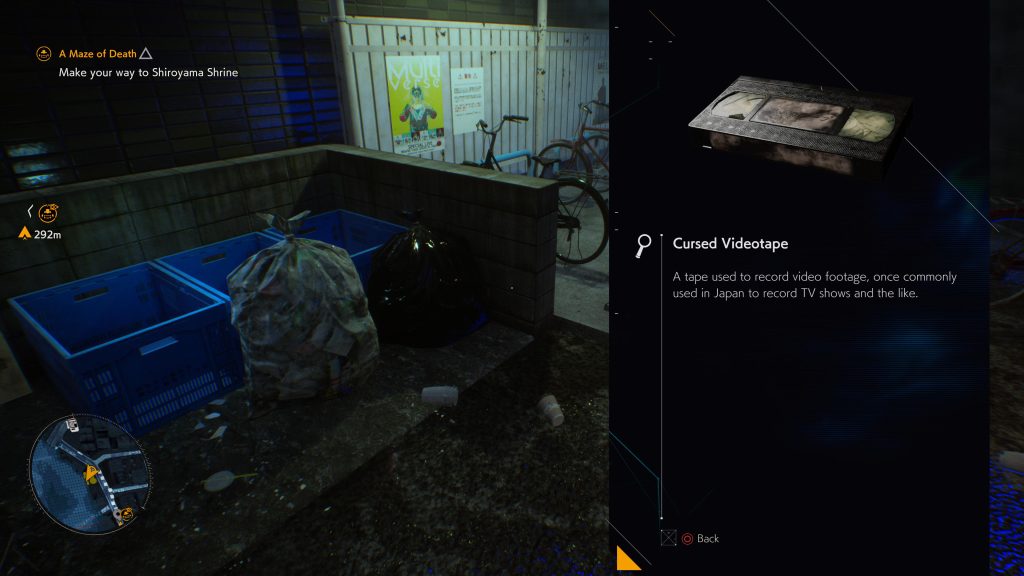 Better watch this right away… now, who has a VCR?

Whilst listed as an ‘Action-Adventure’ game, Ghostwire plays more like a cross between an open world game and a first person shooter. In either case, these types of games live and die by their combat systems. There needs to be enough complexity, challenge and variety to keep you interested through the runtime of the game.

Ghostwire: Tokyo does a good job in regard to its combat and skill progression system. The different varieties of attack are unlocked progressively through the early stages of the game. There are three main types of ethereal shot:

Regardless of which element you use on the Visitors, once their core has been exposed it must be crushed to defeat the enemy once and for all. Remember crushing the core of a ghost when playing ‘cat’s cradle’? …me either

Akito also uses a bow and arrow for long-distance attacks and has access to ‘talismans’ that have a variety of short-term effects like binding enemies to where they are standing.

Easily my favourite type of attack is the one-hit stealth kill, bit this can only be used when standing directly behind an enemy that has not yet spotted you. It is a great feeling to mow through a particular area taking down enemies one at a time without being spotted – though there are a few of the stronger enemy types that are immune to the one-shot attack. 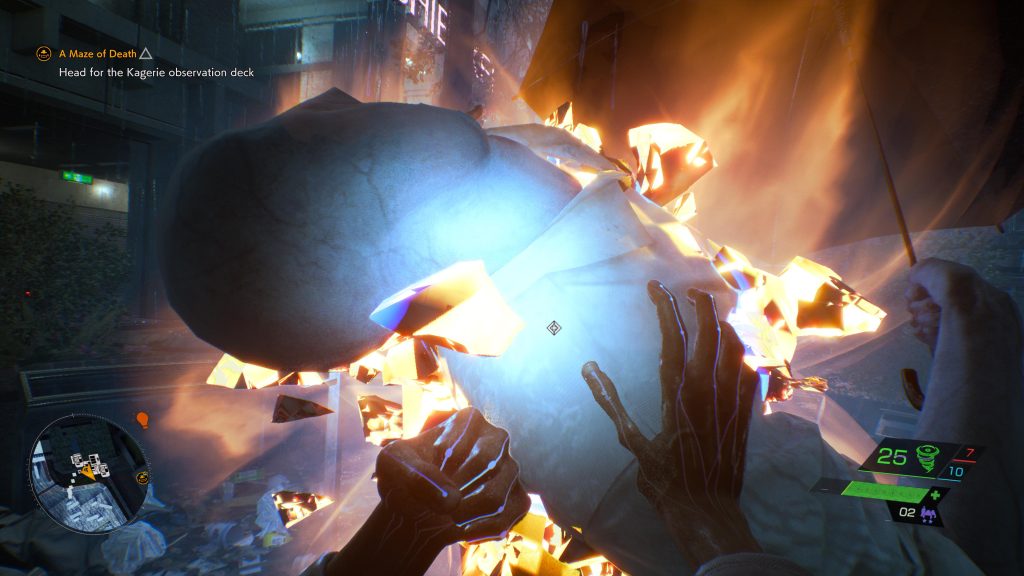 The enemy types appear to be quite varied as well. Walking, running, flying, long distance attacker, heavy tank style spirits – all of the usual varieties are here. The disappointment for me is that there does not appear to be much technique or skill required from a combat sense regardless of the enemy type being faced. Other than the initial phase of stealth kills, once spotted the general method of survival is moving backwards away from the advancing enemies and picking them off one by one with fast wind shots, or a well placed fire charge.

There is a relatively simple skill progression system here that expands on all of Akito’s skills. Generally, each upgrade will provide some type of bonus to existing attacks rather than providing completely new techniques. Upgrades include things like ‘wind shot rate up 50%’, or ‘damage to downed enemies x 1.5’. You do feel stronger and faster after each upgrade, but again there is a feeling of a lack of diversity – which is a little sad. Weaving wind? I’m sure that is a euphemism for something.

Ghostwire’s overworld map feels like a watered down open-world map. It is a vastly smaller area than found in other recent titles such as Horizon Forbidden West and Elden Ring, but there is still plenty to do in Shibuya. Each small area of the city is progressively unlocked by cleansing classic Torii gates. The traversal through Tokyo is relatively uninteresting beyond the ability to glide through the air for short distances. This is great when you make your way up to the rooftops, but otherwise it can take a long time to cross distances on foot. Fortunately there is a simple fast-travel system here that unlocks when you first visit new locations. One of the main collectibles found throughout the map are lost spirits that you can collect. There are massive amounts of these spirits – more than 200,000 (though they are picked up in batches of between 100 and 1000). Some of them need to be saved from their affliction with an Okami-like movement of the analog stick.

In regard to side content beyond the simple collectables, there are multiple types of Japanese spirits to track down and catch. Some take you on a chase over the rooftops, while others like the sneaky Tanuki are hiding transformed into a different object that seems somewhat out of place (and also still has a Tanuki-tail). More interesting though are some of the side quests that require you to enter a haunted building in order to assist a lost human soul that has not crossed over to the other side. These side quests have some of my favourite moments from the game from a presentation perspective… Speaking of which: Something crazy is going on here… we are inside so why all the umbrellas?

Visually, Ghostwire looks great. The city of Tokyo is rendered in excellent detail from the accurate Shibuya crossing layout (with shop names changed for legal reasons) to the convenience store shelves stocked with delicious looking Japanese treats. The game looks beautiful in Quality mode on the PS5 with full ray tracing. However, I elected to play through the game on Performance mode at a buttery smooth 60fps. The styling of the enemies, in particular the monstrous bosses, is superb. There are some absolutely excellent graphical set-pieces in this game – some of them through side-missions rather than the main story. These alone make the side missions worth playing to ensure that you don’t miss out on some mind bending craziness reminiscent of the best moments in Remedy’s Control with a Silent Hill horror twist.

In what is probably an intentional move, the usually bustling metropolis of Tokyo feels empty with no humans roaming around, though there are plenty of Visitors around most corners to keep Akito busy. This isn’t the best looking game on the system, but it is no slouch. The game also runs very well – I came across no significant bugs or crashes of any type, even when the screen was packed with enemies and graphical effects.

As usual, I chose to play through the game with the Japanese voice track rather than the English option. For this game it definitely feels the right way to go, though the English voice acting here is also quite decent. The sound effects, particularly those for elemental attacks and ripping cores out of visitors, are chunky and provide a good weighty feeling to battles. There are some minor sound effects that play when roaming around the city that are also extremely helpful in locating collectibles or traversal assistance. The haunting soundtrack here provides great atmosphere to the proceedings and matches the overall Japanese aesthetic of the title without ever feeling overbearing or unwelcome.

The features of the Dual Sense controller are leaned upon heavily to increase immersion in the game, and I believe that the developers did an absolutely cracking job here. Haptic feedback is used throughout the game in various ways to make you feel what is happening on screen, such as the pattering of rain, or the pull of an enemy’s core as you rip it from their body. Meanwhile, the adaptive triggers provide a different type of feedback with every mode of attack. The best feature through is that KK’s voice is projected simultaneously through your TV/Sound system and the Dual Sense controller’s speaker – this is a genius implementation of the technology created by Sony. I would be interested to know whether KK’s presence in Akito’s hand was a choice made before or after the programming of the Dual Sense speaker feature. In either case: chef’s kiss. 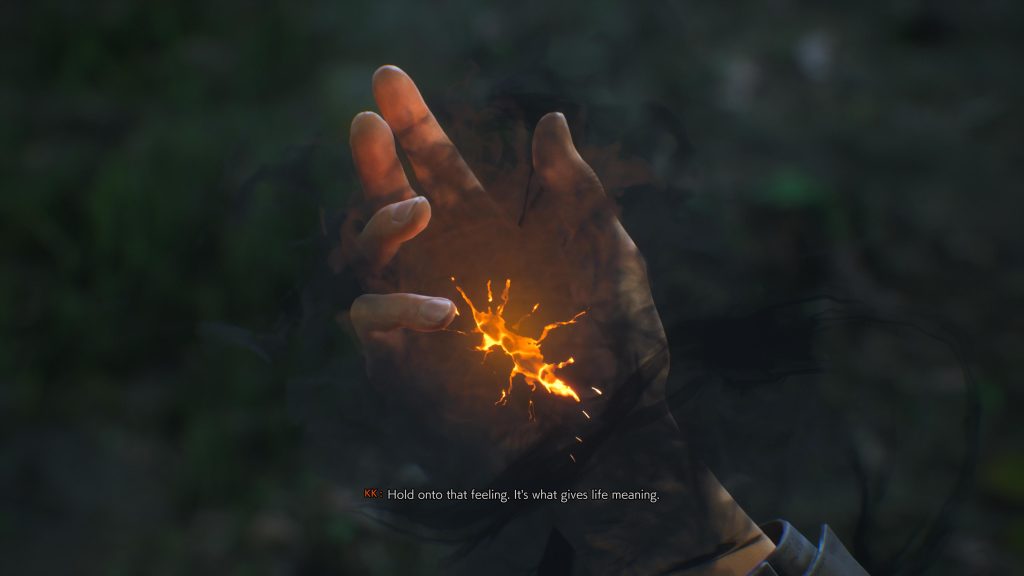 Talk to the hand.

Ghostwire: Tokyo is a relatively short game – particularly when compared to true open world games that can have upwards of 100 hours of playtime. I completed my adventure including a good chunk of the side content in about 20 hours and there would be another 10-20 hours worth of game time for those looking to complete 100% of the activities. 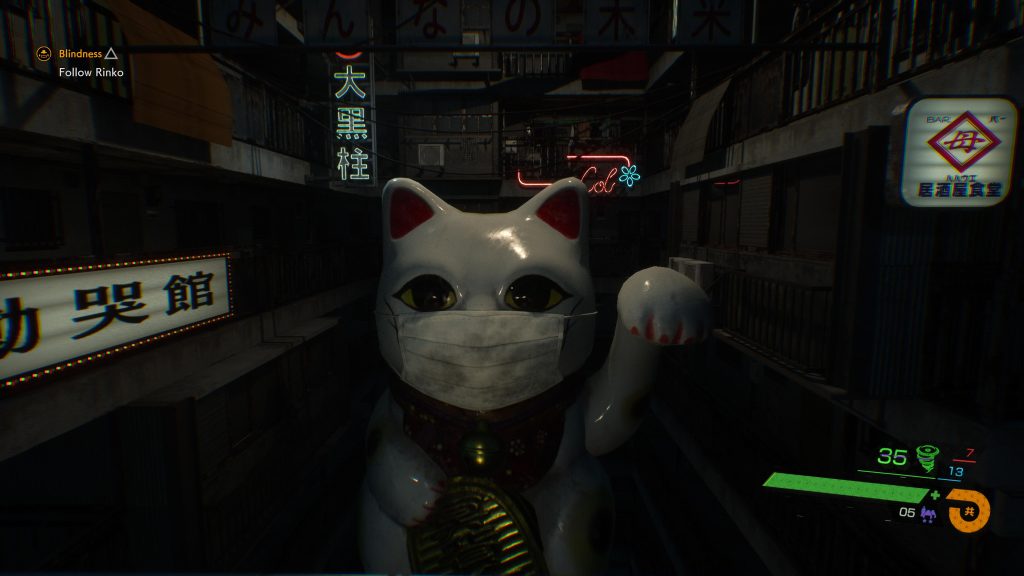 Whilst the combat and progression model of the game is somewhat weak compared to the top-notch design and graphical presentation, the game is of an appropriate length where I still felt engaged throughout the adventure. 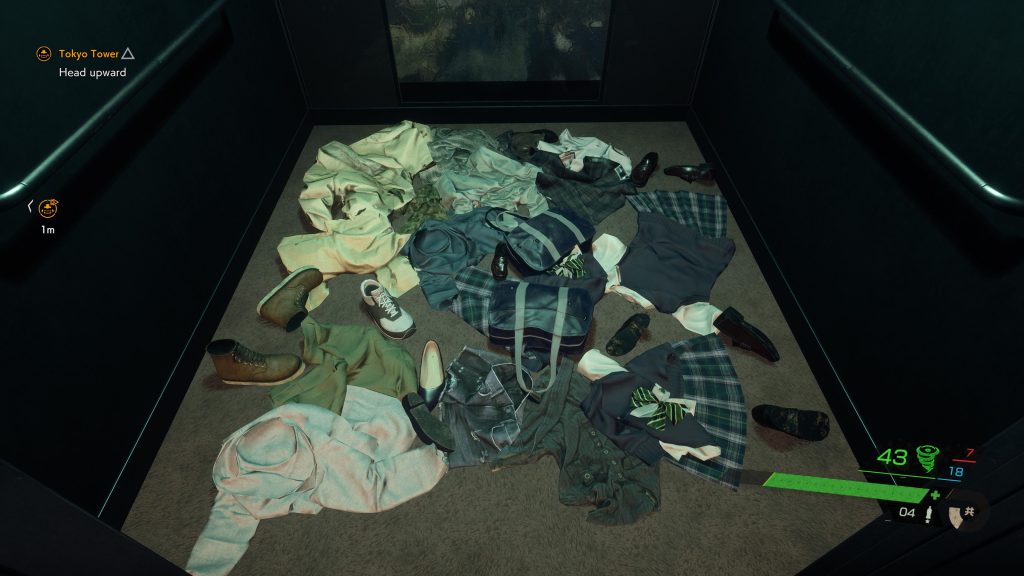 Such a great game, it is worth dropping your pants for.

A storyline that does the job of keeping you engaged without being amazing is tied together with some truly excellent set-piece moments and the innovative and immersive technology of the PS5 Dual Sense controller. Ghostwire Tokyo was a game that I enjoyed, and is easy to recommend to anyone looking for a semi-open-world ghostly romp through Tokyo. The deficiencies in the game are minor and easily overlooked due to the cracking high-points in presentation and atmosphere.

A review code on PlayStation 5 was kindly provided by Bethesda for the purpose of this review.

Wire in to the ghastly hidden world of Tokyo.