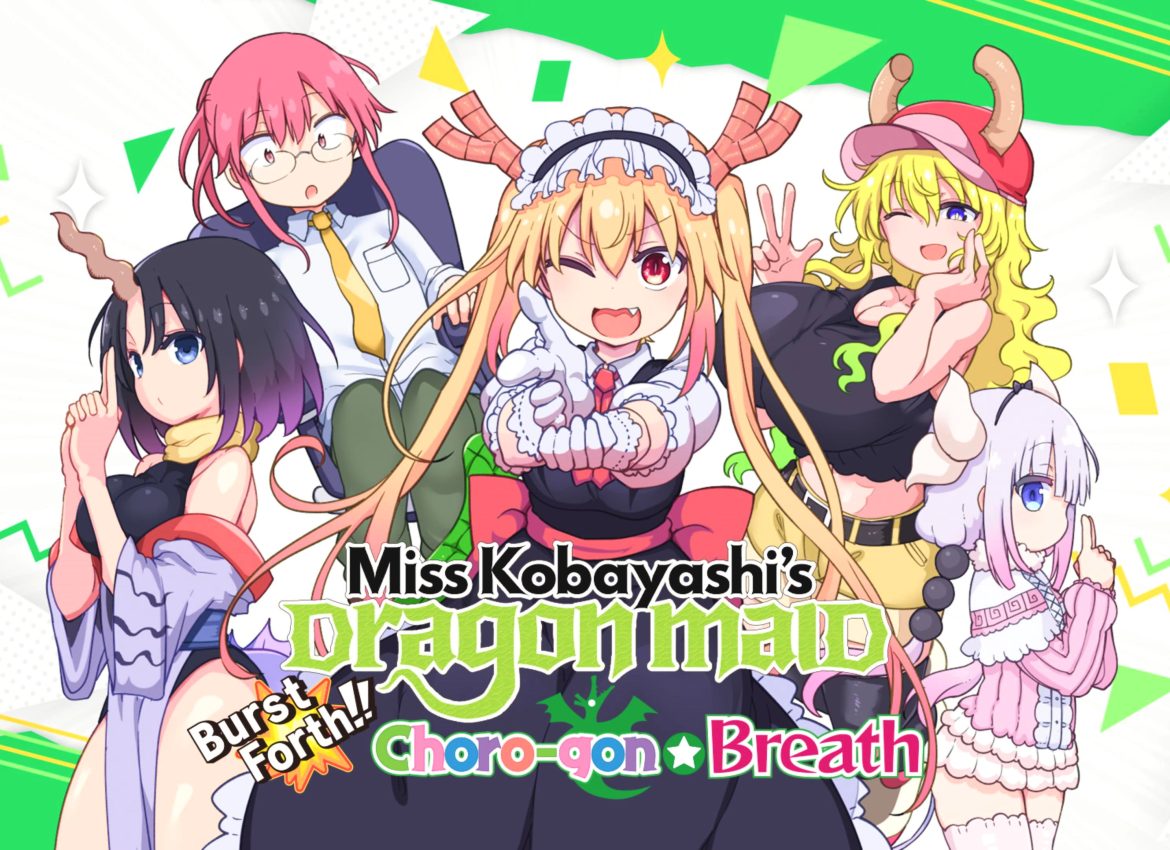 Burst Forth from bullet hell in our Dragon Maid game review.

Name a massively popular anime that’s aired in the last decade and there’s a fair chance it’s received its own tie-in videogame. Internationally popular series like Sword Art Online, Attack on Titan, Kill la Kill, and Fairy Tail just to name a few, have all received videogame adaptations to varying critical success. This phenomenon of converting anime to game was once only common practice in Japan, where numerous anime games released exclusively to a Japanese audience, generally skipping Western localisation entirely. Though with the popularity of anime beginning to surge among Western audiences, many games began receiving wider releases.

Just a few anime tie-in games that never saw release outside of Japan.

Airing in 2017 and based off a manga released several years earlier, this charming and risqué slice-of-life comedy combined fan-service and fantasy to take the anime world by storm: Miss Kobayashi’s Dragon Maid. Featuring a harem of busty dragons transported into modern day Tokyo, fans immediately took a liking to the over-the-top characters, charming animation style, and surprisingly wholesome relationships. Now sporting a multitude of spin-offs, massive mountains of merch, and a second season of anime, it was about time for the series to receive the videogame treatment in Miss Kobayashi’s Dragon Maid: Burst Forth!! Choro-gon Breath for PlayStation 4 and Nintendo Switch.

Before getting diving into the review, it’s important that it’s made clear that this game is a Bullet Hell shoot ’em up from the same team behind Raiden V: Director’s Cut and Caladrius Blaze, so don’t expect anything too in-depth with regards to story or gameplay. That being said, how exactly did Kaminari Games manage to turn Miss Kobayashi’s Dragon Maid into a shmup?

Awakening in an unknown interdimensional space, Miss Kobayashi and her brood of dragons alongside the titular Dragon Maid, Tohru, find themselves completely trapped. After a brief conversation to determine their surroundings, it becomes apparent that they all seem to have become trapped inside of Fafnir’s computer, one of the other dragons who’s currently preoccupied at Comiket, leaving the team stranded with nothing left to do but play computer games. Just make sure you don’t look through his browser history while you’re in there.

With Fafnir unlikely to return any time soon, Kobayashi and the gang figure they’ll entertain themselves in the mean time by playing through each of the games on the computer. Perhaps beating them all could potentially lead to a way out? And so they set off to challenge the five games that await them in the hope of leaving this PC dungeon and returning to the real world.

Unlike the cast of Dragon Maid, the story isn’t very well-fleshed out. Given the game’s genre as a bullet hell shooter, the lack of story shouldn’t come as a surprise; most shmups are almost entirely focused on their gameplay after all. Though this can’t help but seem like a missed opportunity – a series like Dragon Maid with so many charming characters seems perfectly suited to a story-driven game like a Visual Novel, so the paper thin plot in Burst Forth is somewhat of a disappointment.

Busty dragons & bountiful bullets are exactly what await players in Dragon Maid: Burst Forth. What more could a shmup fan ask for? Split across five unique levels, players will be swarmed by waves of enemies, face challenging bosses, and sweep the skies as one of three powerful dragons: Tohru, Elma, or Kanna.

The game plays out much like any other bullet hell shooter, with the screen often filling with hundreds of projectiles that the player must deftly dodge. Burst Forth spices things up from the standard shmup gameplay by giving the player the ability to swap dragons on the go, each of whom possess special characteristics making them more suited to certain levels:

By swapping at any time, players may choose the style of attack the suits each situation best while letting their benched characters regenerate health. Tonnes of enemies on screen? Pick Elma to wipe them out. Enemies behind you instead? Kanna’s homing bullets will take care of them. Huge boss with an even bigger health bar? Tohru will mow them down in no time. Each dragon also has access to a physical attack that dashes towards the nearest enemy as well as a “Choro-gon Breath” attack which wipes the board entirely and deals massive damage to any enemies on screen.

(Colours not representative of in-game footage)

The five levels also include a suite of collectibles to obtain, including treasures and segments of promotional artwork that are specific to each stage. There are also five difficulty levels and five “Risk Rates” which determine the quality of items that appear. These inclusions encourage the player to play each level repeatedly, which is reasonable incentive for dedicated fans, but becomes tiresome and repetitive after a few playthroughs as the levels are identical every single time. Choose wisely. Any difficulty above Normal is almost certain to decimate 99% of players.

So is the game as attractive as the anime? Does it preserve the charm of Miss Kobayashi’s Dragon Maid that we’ve all come to love? Well the answer to that is both yes and no.

At only a 1.5gb file size, be prepared for a game that is pretty bare when it comes to animation. Most character interactions are presented as still frames, a little bit like a visual novel, but with backgrounds that are entirely lacking any creativity. The characters are almost certainly a highlight, but most of the player’s time will be spent in the shooting segments. Each level is given a distinct visual style based off a certain game genre (e.g., Fantasy, Sci-Fi, RPG, Monster Hunter) and has enemies and backgrounds to match – these aren’t particularly impressive, but perform flawlessly and don’t distract from the action.

I could happily scroll through this menu all day.

On the other hand, the game’s UI/menus are sleek and visually appealing, especially for fans of the series. It’s strange to say, but the menus are the best part of the game’s visuals (aside from the fanservice that’s scattered throughout). Swapping between each of the screens and seeing the characters appear alongside the clean UI makes the rest of the game appear slightly unpolished. Let’s be real though, most users playing this game won’t be focus on the UI or the levels – they’ll be too busy ogling the gallery instead. 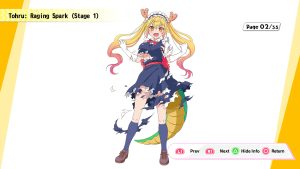 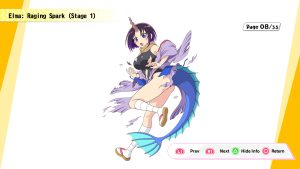 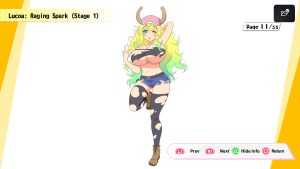 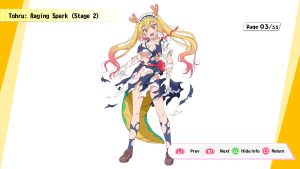 Featuring a soundtrack that’s vastly different from its source material, Burst Forth does away with the cutesy, adorable music of the anime and instead opts for a more appropriate, up-beat set of electronic tracks to accompany its frantic levels. While it does still seem fitting for the gameplay, particularly as the game itself is technically set inside of a computer, it would have been nice to hear a few songs either from the anime, or at least arrangements from the series. Here’s an example of a couple stand-out tracks to tempt your eardrums:

Fans of the anime will be pleased to hear that the entire Japanese cast return to reprise their roles, with all the game’s dialogue being fully voiced. This is a welcome addition, helping the game feel more genuine and true to the series. While the text within the game has been fully translated to English, voiceovers are still entirely in Japanese and viewers who instead watched the English dub of Dragon Maid may potentially be disappointed by this.

Fans of collectibles will be overwhelmed at the amount of gallery items that can be unlocked while playing through each level. There are a total of 288 pieces to collect, rewarding the player with a wide variety of concept art, manga covers, official promotional images from the series, all of which are accompanied by voiceovers from the characters. It’s basically a fan’s delight and absolutely packed with a double serving of fanservice ready to burst at the seams. It was absolutely worth playing through the same level 12 times to unlock this.

But it’s not just raunchy art to keep you playing, there are also several additional game modes including a Boss Rush, infinite challenge mode, and a secret unlockable level by fulfilling certain conditions during the story mode. Every single difficulty and level also has online leaderboards, which will satisfy the most competitive players that want to show off their bullet hell skills.

Although it’s not the genre of tie-in game that most were expecting, Burst Forth does a decent job at transitioning the beloved series into a bullet hell shooter while retaining many aspects of Miss Kobayashi’s Dragon Maid that fans are fond of. Whilst gameplay may be repetitive and at times even punishingly difficult, the tantalising unlockable reward of series art will definitely appeal to the most dedicated players. With completion easily achieved in a single sitting, this is merely an entrée as the first Dragon Maid tie-in game, and likely to leave players hungry for more in future instalments.

Get a delightful deal on a copy of Dragon Maid: Burst Forth here!

A review code was kindly provided by the publisher for the purpose of this review. If you enjoyed this review, please check out more of our articles and reviews here or follow us on Facebook, Instagram, and Twitter.

The voluptuous Dragon Maid shooter that's absolutely bursting at the seams with b... ullets.