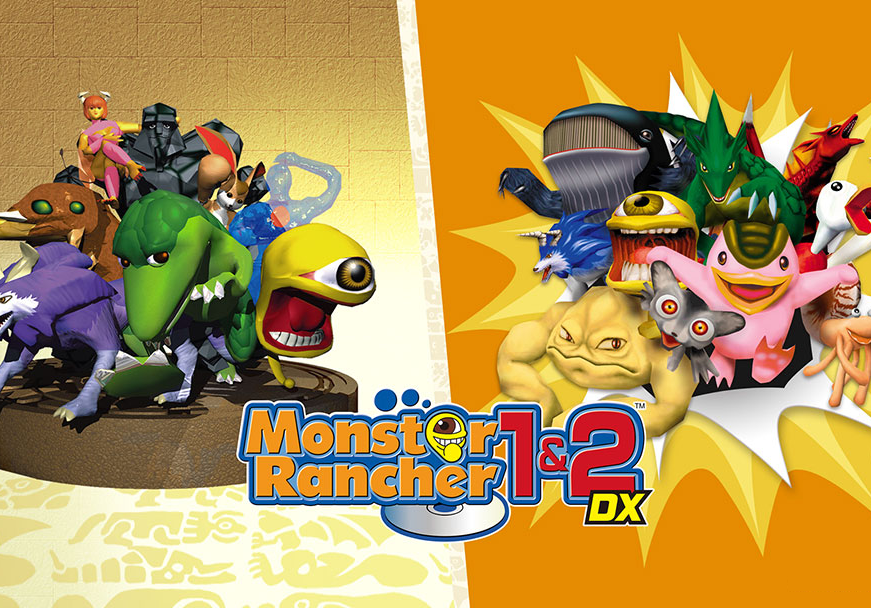 What do you get when you smash Diet-CokeTM Pokémon, Tamagotchis, and fighting games? You get Monster Rancher 1 & 2 DX. These two games are bundled remasters of the PS1 originals with some quality-of-life features added. The series was first launched in Japan in 1997, the second game following in 1999, with an anime adaptation following hot on its heels. If this development arc seems similar to Pokémon, you’d be quite right.

While Monster Rancher is a clone hoping to ride the coattails of its popular cousin, its focus is more on the breeding simulation, and the battle mechanics are closer to fighting games, rather than a turn-based RPG. Koei Tecmo released an updated version of their iOS port to Nintendo Switch in 2021. I named my first wolf monster “MoonMoon“. While the game’s main hook point is reviving monsters from ancient “disc stones”, this is one port that really should have stayed locked in the past.

The crux of the game is breeding monsters and battling with them, so there is little focus on story. The initial premise for both games is that an individual monster is trapped in an ancient artifact called a “disc stone”. Using a temple, the monster can be extracted, trained, and used for battle. You’re a young monster trainer, ready to go out into the world with your new monster pal. He better not bring back a Deviljho.

In the original version of the games, you’d pop in a real life CD to obtain a monster, but in the year of our lord 2022, (with the remaster), you can just look up the song title or artist and select it. Monster Rancher 2 has slightly more flavour text around its characters and world in its writing, but it’s still pretty bare-bones, no overarching plot or character development to be seen. However, if the story is lacking…

Then solid gameplay can make up it! Sadly, the gameplay loop did not leave me hooked. Once you get your would-be-dino, you train them up at your ranch. The activities you can assign to your monster, training them to level up stats, or work, were you get a bit of cash for your buddy’s efforts. This loop is cute but gets repetitive quickly. There is a bit of depth when it comes to raising your monsters’ stats, with lots of values to keep track of and increase or decrease with food, praise, loyalty and training, depending on what kind of playstyle you like. Rare monsters can be obtained by freezing two others, then combining them together. After you’ve completed the raising simulation that work around calendar events, you can register your monster for a battle in a tournament.

Your monster can be sent on errands in order to increase its stats.

The battles itself are in real time, where your positioning on the screen determines what “Techniques” can be performed, which reminds me of fighting games like Tekken or Street Fighter. Inputting commands is clunky, and the game will force choose the correct move if your monster isn’t at the appropriate distance, rather than what you’ve actually selected. It can feel like backseat driving. Nobody likes backseat driving. Monster Rancher 2, while having very similar DNA to 1, has improved its formula, with more monster variety, tweaked battle mechanics, improved graphics etc.

So you’ve raised your beloved monster? Now it’s time for it to fight to the death. From MR 2, where the models are a bit less blocky.

The textures are janky, and the colour palate drab for Monster Rancher 1. (However there are strangely endearing pixel animations that pop up whenever a monster does a training or work task). Monster Rancher 2 sports a rounder, cuter, more colourful style, probably in order to fit with the anime that came out not long after, which is much more pleasant on the eyes. The music too is standard PS1 fare and the compositions are nothing standout. Great music can really add to the character of a game, but the music is not particularly memorable here. Audio quality is also somewhat disappointing.

The DX remaster includes a fast forward feature, additional save slots, the ability to freeze and move monsters from Monster Rancher 1 to 2, as well as adding in extra monsters that were only available separately in the previous Japan and Western versions.

While an interesting look into the history of the breeding simulation genre, Monster Rancher 1 & 2 XD should be braved by only those who have a nostalgia for the game or are hardcore fans of the genre. There’s not a ton to recommend the game outside this, though I did have a bit of fun with my awkward monster buddies.

So, why you should buy it?

But why you shouldn’t buy it?

A review code was kindly provided by the publisher for the purpose of this review.