The sequel that many Borderlands fans have been waiting for is finally here. With the final episode of the original Tales From The Borderlands dropping on October 20th 2015, it’s been exactly 7 years and 1 day since we last looked at the Borderlands franchise through the lens of a playable story. Where the initial entry was made by Telltale Games (who brought you phenomenal narrative game such as Telltale’s The Walking Dead and The Wolf Among Us), this newer entry is made completely by Gearbox Software. With a new game comes new protagonists, new stories and new laughs. Follow along as we explore the Borderlands once more in our New Tales From the Borderlands review!

The story of this new Tales game takes place shortly after the events of Borderlands 3. You take on the role of 3 protagonists: the neurotic Atlas scientist with a heart of gold Anu, her streetwise, wannabe entrepreneur brother Octavio and Octavio’s boss, the aggressive, frogurt slinging, wheel – er – hoverchair bound woman with some intense sexual frustration, Fran. Three underdog nobodies whose stories are intertwined with each other. 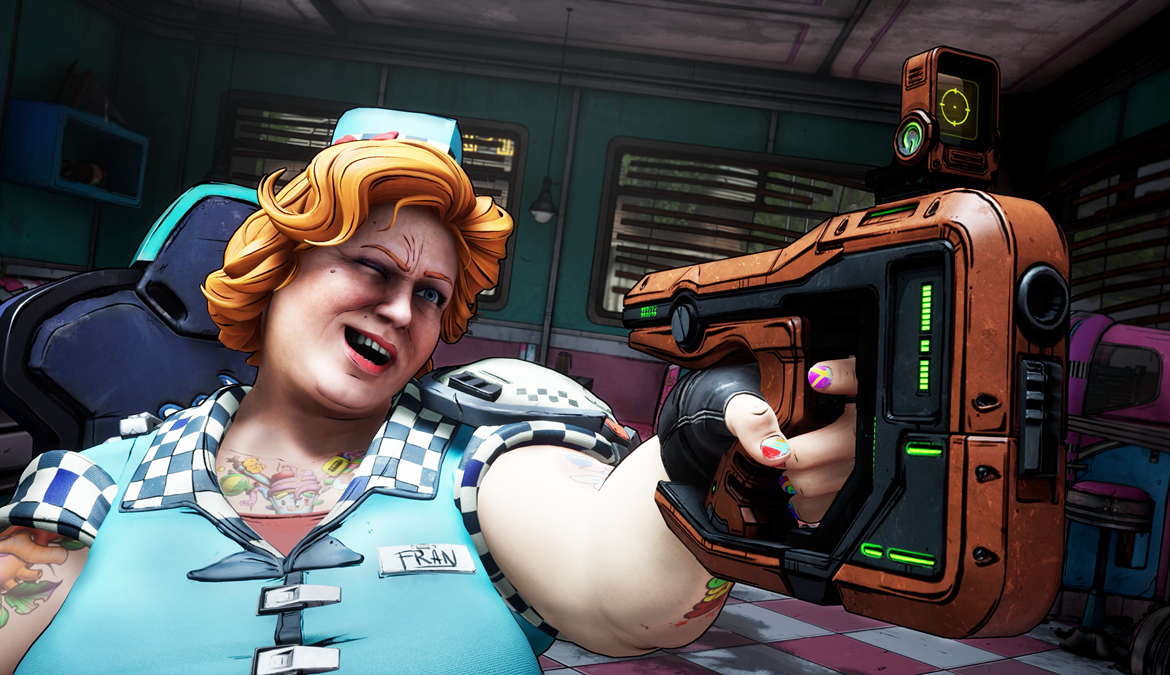 These loveable losers are certainly no heroes, but they’re the protagonists of this new Borderlands tale.

Anu wants to perfect her device to bring peace to the universe, Octavio wants to strike it rich and become a VIP, and Fran just wants to live her life with her frogurt store. Accompanying them is Octavio’s friend L0u13 (Louie), an assassin-bot for hire. Unfortunately, because there is no such thing as peace in the Borderlands universe, their lives are turned upside down by yet another weapon manufacturer. This time, Tediore are the ones instigating a hostile takeover. Our 3 nobodies, and Louie, need to combine their talents, grow as a team and make some cash along the way as they save the universe. Unlike mainline Borderlands games, the standard run and gun aspect takes a back seat this time. The Tales games play out as an interactive story where your choices impact events later on. If you played the first Tales game, you know the basic deal with what to expect. You watch the story unfold until you’re prompted to answer with 1 of 4 dialogue choices. Peppered between your dialogue choices you may be asked to perform one of the many quick time events. There are small bits of exploration in between some scenes, allowing you to scavenge for cash to spend on cosmetics or find one of the many Vaultlander figurines. As the name suggests, these are a parody of the infamous Skylanders toys, but modelled after former Borderlands characters. There’s one for each of the original playable characters from the first Borderlands game, side characters like Cl4P-TP (Claptrap) and even Handsome Jack (legendary rarity naturally).

What do you do with these collectible figurines you may ask? Well its simple, he pitch them against each other in fierce combat! Is this some Yu-Gi-Oh anime-esc style where you summon your vault hunter with some holographic display? Nope. You play with them like classic action figures and bash each other around. The comedy is on point much like every other Borderlands game.

Putting the action back in action figures.

Speaking of the comedy, we need to take a moment to really look at the best aspect of the game. Borderlands comedy has a long track record for having laugh out loud moments. New Tales has even more to add to the list! There were moments where I had to pause because I was laughing too hard. There were also times when I had my head in my hands groaning from mad puns. In this way New Tales is a fine addition to the Borderlands franchise.

The characters are quirky. They are each given their own unique personalities and I found I would choose my options based slightly more on “what would this character do?“. Fran and Anu even had character arcs, allowing them to both mellow out and grow, though this was also impacted slightly by my choices.

Because this game had a bigger team behind it, and because it’s on stronger platforms, it performs much smoother in the exploration sections. I found that the characters almost glided around these sections instead of slowly dragging their feet. The game also features decent replayability due to how you interact between the three protagonists you can see 1 of 5 endings when you first finish the game. On top of that, you may even want to redo a section just to see the different scenarios you end up in.

Probably one of the best parts is that you don’t have to wait for months to see more of the game. Yes, the game is spaced into 5 episodes much like the first. But because this was made directly by Gearbox, we don’t have to wait months between releases. All the episodes are right there from the start all rolled into one package.

I’m going to come right out and say it. If you played the first game and are looking for closure for the cliff-hanger ending of the previous game, you won’t find it here. That’s right folks, despite this being a new Tales game, we have no mention of the events of the previous game. The closest thing we have is that the previous protagonists make very minor appearances. Rhys is Anu’s boss because, as seen in the events of BL3, he’s the CEO of Atlas and Fiona only makes a VERY minor appearance at the very end of the game.

The only reason I can think there was no mention is because this wasn’t made by Telltale games, but you would assume that Gearbox had SOME hand in the previous story as it lined up with events from the mainline games. It makes one wonder if they simply forgot or are instead trying to move away from old stories. NTFTB does its own thing, which may frustrate fans wanting more of the first game.

Throughout the game you’re introduced to a number of really interesting side characters – but most of your connections don’t matter. These characters serve little more purpose than to fluff out the interactions at the start of the game. In the first Tales game, the interactions you had with side characters lead to them joining you in the final battle and bringing their unique talents with them. This also meant that how you interacted with them was key, otherwise they might not show up. This time around the only choices you make that actually mean anything are the choices between the protagonists and Louie. But apart from that, you can treat just about anyone like garbage or your best friend, you will be at the same place in the end.

The protagonists may be quirky but its not always a good thing. I actually found Anu and Octavio to be kind of annoying at the start. At least Anu had a fascinating character arc, making her a much more likeable character by the end. But I feel like Octavio, despite having a lot of potential, didn’t really all improve that much. Too. Many. QTEs. I get that in playable story games like these you need something to pad out the interaction, but when the story is filled to the brim with QTEs that can lead to a game over if failed, it gets a bit much. Though admittedly, having the entire Konami Code as a QTE was pretty fun. On top of that, I found the game was much more dialogue-heavy than its predecessor with less of a focus on exploration. It would have been nice way to break up the long stretches of story by offering some of the interesting Borderlands locales to explore.

New Tales From the Borderlands offers a story is quirky and comedic with decent replayability due to its dialogue choices. The trio of protagonists actually have flaws that they work on leading to some decent character arcs and the game is smooth as silk in the exploration. Where it really lets itself down is the lack of any resolution to a previous storyline and the overabundance of QTEs. If they also had the really enjoyable side characters make more of an appearance, it would have also help flesh out the world.

All up, this leads to a game that’s just “okay” in the long run. I plan to go back and make some different choices, but when it comes to comparing to the other games in the franchise, this settles somewhere in the middle of the pack.

A review code was provided was kindly provided by 2K Australia to make this review possible. If you enjoyed this review, be sure to check out our Tiny Tina’s Wonderlands review, and more of our reviews here!

Ain't no rest for the wicked, or us either, as we dive into the latest instalment of the Borderlands franchise.