Few horror series come close to the huge cultural impact of Resident Evil. Last year, with the series celebrating its 25th anniversary, fans were treated to the latest main entry in the Resident Evil franchise: Resident Evil Village. Set after the events of RE7: Biohazard and drawing upon gameplay elements of prior games, players once again took on the role of Ethan Winters. Our poor protagonist had only just survived the twisted Baker family, only to have his newborn daughter stolen by a crazed cult. That daughter was none other than Rose. 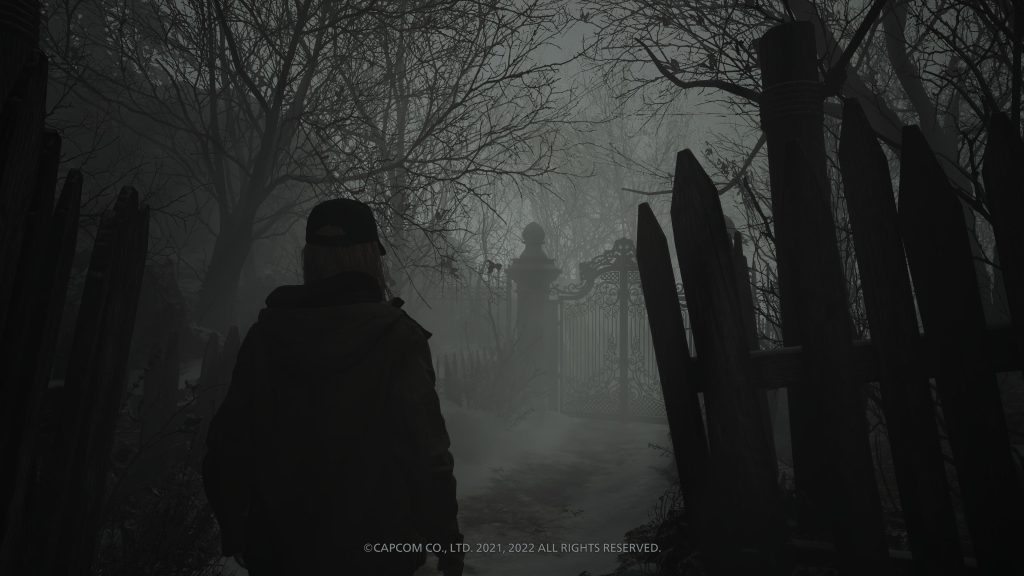 Returning to the Village where her father once endured horrors beyond comprehension, Rose retreads her father’s steps in search of answers and a cure for her mysterious condition in Shadows of Rose. Offering a standalone story featuring familiar gameplay with a twist, players now step into the shoes of Rose Winters, and further explore the eerie locales of Village once again. So if you’re foolish enough to want to re-live that horror, it’s time to turn off the light and take a step into our Shadows of Rose review.

Set approximately 15 years after the events of Village, which I won’t spoil for those of you who haven’t played it, Rose Winters possesses powers beyond comprehension. Having grown up with the supernatural powers of the Megamycete, a parasitic fungal organism capable of controlling a network of hosts, Rose wishes for nothing more than to be “normal”. Relentlessly ridiculed and bullied by her peers for the strange powers that she attempts to hide, the prospect of being able to rid herself of them seems all too tempting. So when offered with this possibility, Rose jumps at the chance. 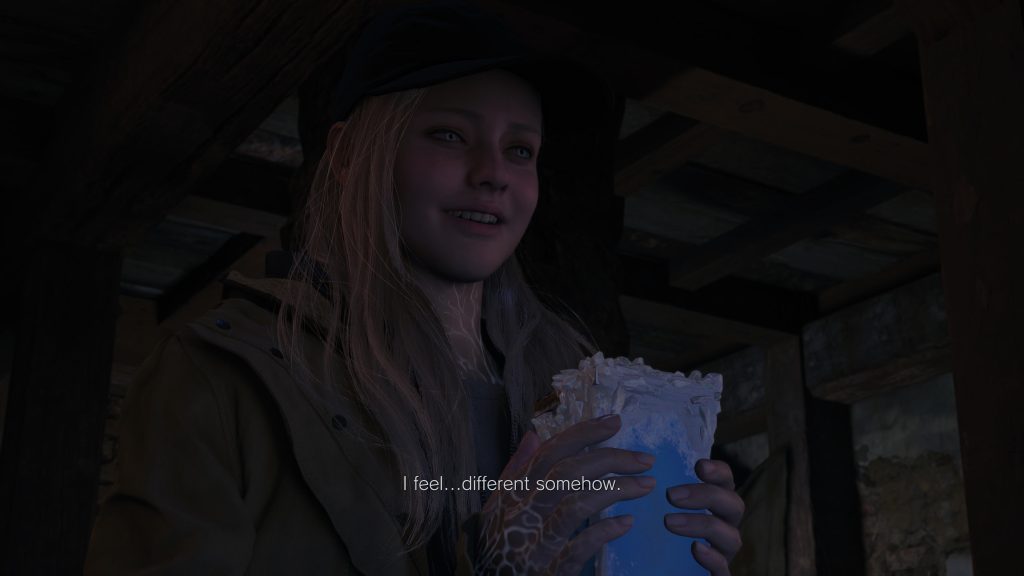 Is being different such a bad thing?

Though this all comes with a cost. In order for Rose to abolish her powers, she must inject her consciousness into the Megamycete, which holds within it all the horrors and memories of the Village her father once confronted. With her mind now part of the Village, Rose must confront the twisted horrors that await and challenge the Masked Baron to retrieve the Purifying Crystal that might see her relieved of the powers that plague her.

Split into two distinct sections, Shadows of Rose takes place across the impressive and lavish Castle Dimitrescu, and the second half within the cramped and claustrophobic corridors of House Beneviento. Arguably two of the most memorable locations from Village, so it’s logical that Capcom would choose these two areas as the setting for their first DLC.

Thrust once more into the dreaded Castle Dimitrescu, but this time you won’t be face-to-face with not an 8-foot tall Vampire Mommy. Instead, a corrupted version of The Duke, referring to himself as The Masked Baron, is on the hunt for Rose. With Rose pursued by otherworldly creatures that quite literally suck out her soul (Dementor style), using her powers is necessary to survive. Thankfully she has assistance from an invisible figure, leaving clues and advice for her through literal writings on the wall. Even still, obtaining the Purifying Crystal though is no easy task, as the only way to obtain it lies behind three masks scattered throughout the castle.

This first half of the game is quite straightforward, with Rose fending off threats using an arsenal of weapons much like the base game. As an added twist, Rose may also use her powers to unlock paths by clearing tendrils of the Megamycete, or can even utilise them to put enemies into a stasis for more accurate headshots. It’s a familiar Castle Dimitrescu experience that still manages to feel fresh due to its new threats and altered environment.

No headshot? No problem.

The DLC’s second half takes a completely different turn, removing weapons entirely and instead opting for a more psychological horror approach. This segment of the game is almost entirely pacifist, with Rose now trapped within the confines of House Beneviento. It’s also no exaggeration that this makes for some of the most tense and horrific moments ever experienced in the entire Resident Evil series. 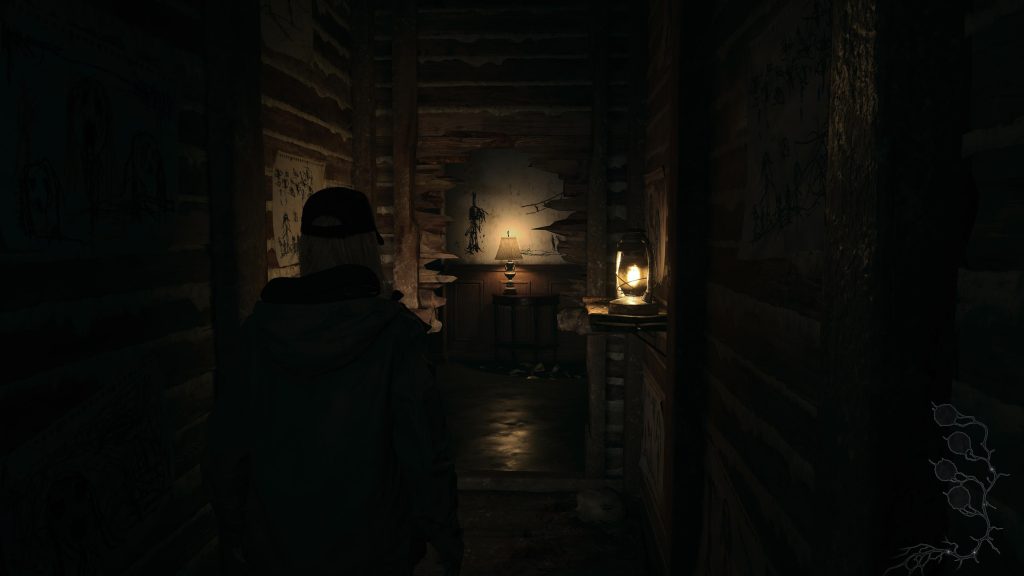 You’re going to need a change of pants for this section.

Gameplay within House Beneviento is less about action, and more about stealth, survival, and using your wit. Occasional jumpscares will startle players while focused on solving puzzles, but the real dread is encountered through mannequins that are scattered throughout the house. These are cleverly used as a foe at one point in the DLC, which is easily the highlight of the entire experience. This hour is a chilling experience that every player will either get a kick out of, or haunt their nightmares for weeks to come.

As with the base game, the visuals throughout Shadows of Rose are brilliant. Set across familiar areas, many assets and environments are re-used, but the DLC adds a morbid twist, corrupting each area with remnants of the Megamycete that have taken hold. This makes for some of the most disturbing visuals seen so far in Village, and is a delight for players that relish in unnerving and unusual aesthetics. This only becomes more pronounced towards the end of the DLC, especially in the smallest spaces of House Beneviento. There are some clever visual touches which I won’t spoil, but it’s a surprise that few players will be expecting. 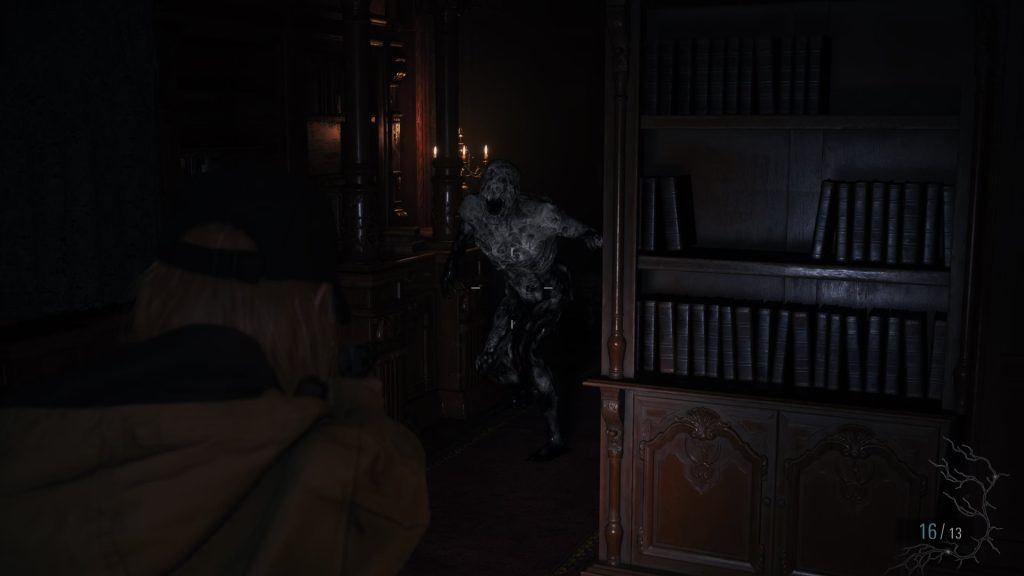 And while the environments may be familiar, many of the enemies are not. Rose is pursued by faceless creatures that shuffle and shamble towards her, like a combination of a zombie and a Dementor. Their designs and movements are undoubtedly unnerving, and being taken unawares by one is bound to give most players quite the fright. But the enemies that await in House Beneviento are far more chilling, with designs that are eerily simple yet terrifying. I won’t spoil it, just wait and see for yourself!

With the DLC campaign able to be completed in approximately 2.5 – 3 hours, Shadows of Rose is certainly a decent addition to the main game. The gameplay however is entirely linear, and Rose’s limited equipment pales in comparison to Ethan’s arsenal. This gives little incentive to replay unless changing difficulty options or wanting to experience both the first person and third person camera modes. If you’ve played Village, you’ll find the Shadows of Rose DLC quite easy to complete.

Outside of the Shadows of Rose DLC, players who purchased the pack as part of “Resident Evil Village: Gold Edition” will be given access to third-person mode in the base game, and The Mercenaries: Additional Orders, adding fan-favourite Lady Dimitrescu and the hammer-wielding Heisenberg as playable characters to this score-driven enemy wave mode. Though this arcade-style mode is less about horror, and more about dispatching countless mobs as swiftly and efficiently as possible.

Shadows of Rose, like Rose herself, is short and sweet. This standalone story can be completed in a single sitting and offers a glimpse at Village’s most horrific settings through a new lens. And while brief, segments of this DLC are some of the most terrifying ever seen throughout the entire Resident Evil series. So if you enjoyed exploring Village, Shadows of Rose is an absolute necessity beyond a shadow of a doubt.

A review code was kindly provided by Capcom Australia for the purpose of this review. Haven’t played Resident Evil Village yet? Be sure to check out our review here!

Return to the Village where terror rose in the horrific new Resident Evil Village DLC.