One monkey, many islands. The series has gone through several redesigns over the decades.

Following the story of enthusiastic treasure hunter and *ahem* “pirate” Guybrush Threepwood, the Monkey Island series is full heart, laughter, references and swashbuckling adventures. Hopefully with the original creators behind it, Return to Monkey Island can live up to the series’ legacy. Read on to join us on this secret hunt!

The story sees our famous wannabe-pirate explorer Guybrush Threepwood telling his son the tale of how he decided to return to Monkey Island in search of the lost secret of Monkey Island. He’s not the only one hunting for the secret however. Along the way he must outwit and out-race his Arch nemesis, the dreaded zombie ghost pirate LeChuck. Returning to the series are other fan favourite characters including Guybrush’s wife Elaine, used boat salesman extraordinaire Stan S. Stanmann and everyone’s favourite invincible demonic talking skull, Murry. These are just some of the fun and interesting returning characters players can expect to encounter along the way.

The gameplay is the same as it always has been. A simple and fun point and click adventure game like old. Though the controls are much more streamlined now especially for console players. Each interactable object has a highlighted circle on it which gives players something to focus on. The game also helps give some accessibility to new players to the series.

Before you even move past the title screen you are prompted to check out the scrapbook which gives you the backstory on all the previous games and gets you caught up on all the key players of the story. Voiced by our wannabe pirate hero himself, you can delve into The Memoirs of Guybrush Threepwood and relive the story so far. If you’re an avid fan who likes a challenge or more in the game for the story alone, you’ll have your pick of the difficulty. You can play though for the story on an easy difficulty or choose the hard mode and be given more challenging and in-depth puzzles. Think you’ve got what it takes to outwit LeChuck?

A new inclusion to the game is a set of collectible trivia cards. These cards are hidden throughout the levels and will respawn over time. The set of 100 cards features questions relating to the current game, the previous games in the series and even real life events like asking when the creators started working at Lucusarts.

Finally a new addition to the series is a magical hint book given to Guybrush early on. Players who are stumped on puzzles might be inclined to look up hints or walkthroughs online but that can often lead to spoilers for the story. With the use of the hint book, players can ask questions about specific puzzles and can be given a gentle nudge up to a hard push towards the answer.

Return to Monkey Island does away with the 3D visuals of the previous few games, opting for a more unique art style that somewhat resembles papercraft. The more flat and cartoony style of the art makes it feel like you’re playing through a storybook. It’s fitting as Guybrush is retelling his adventure stories to his son. 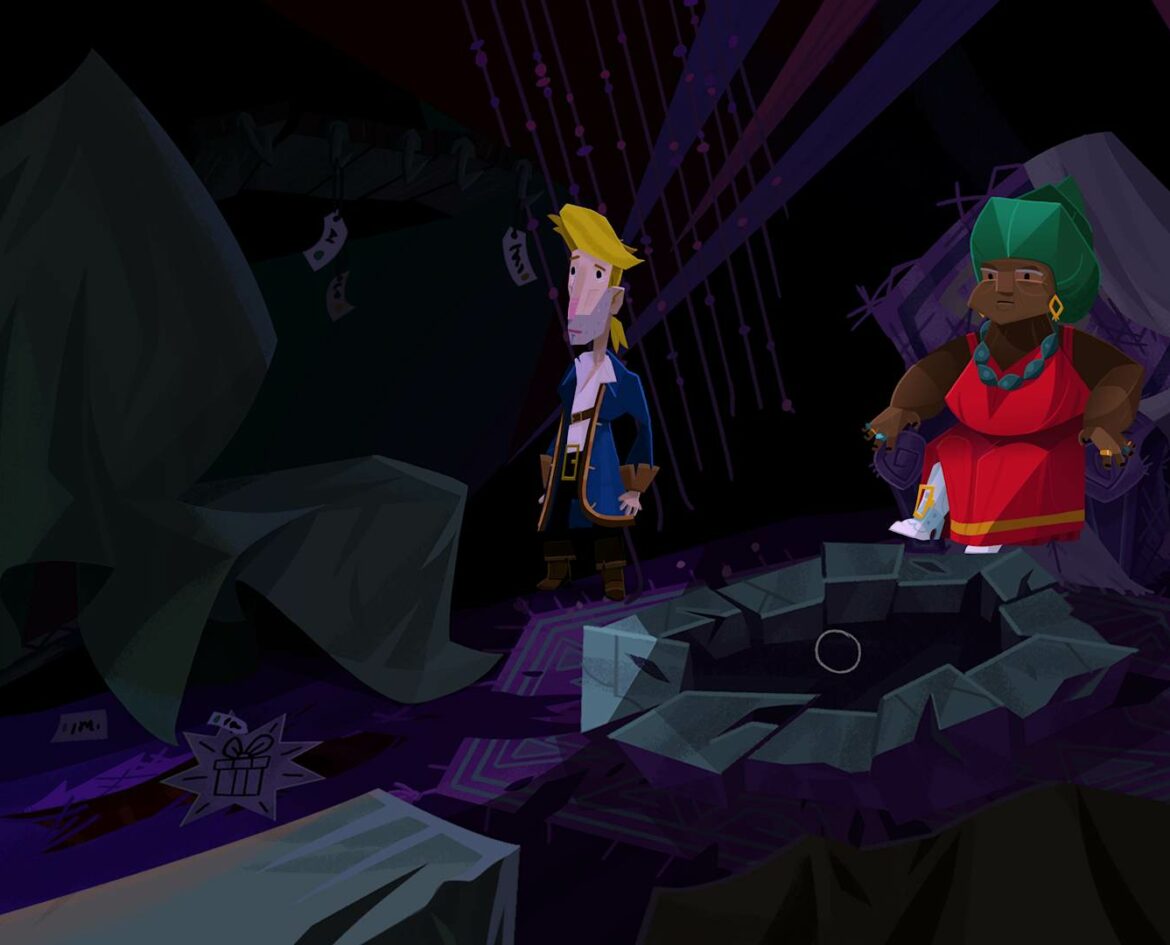 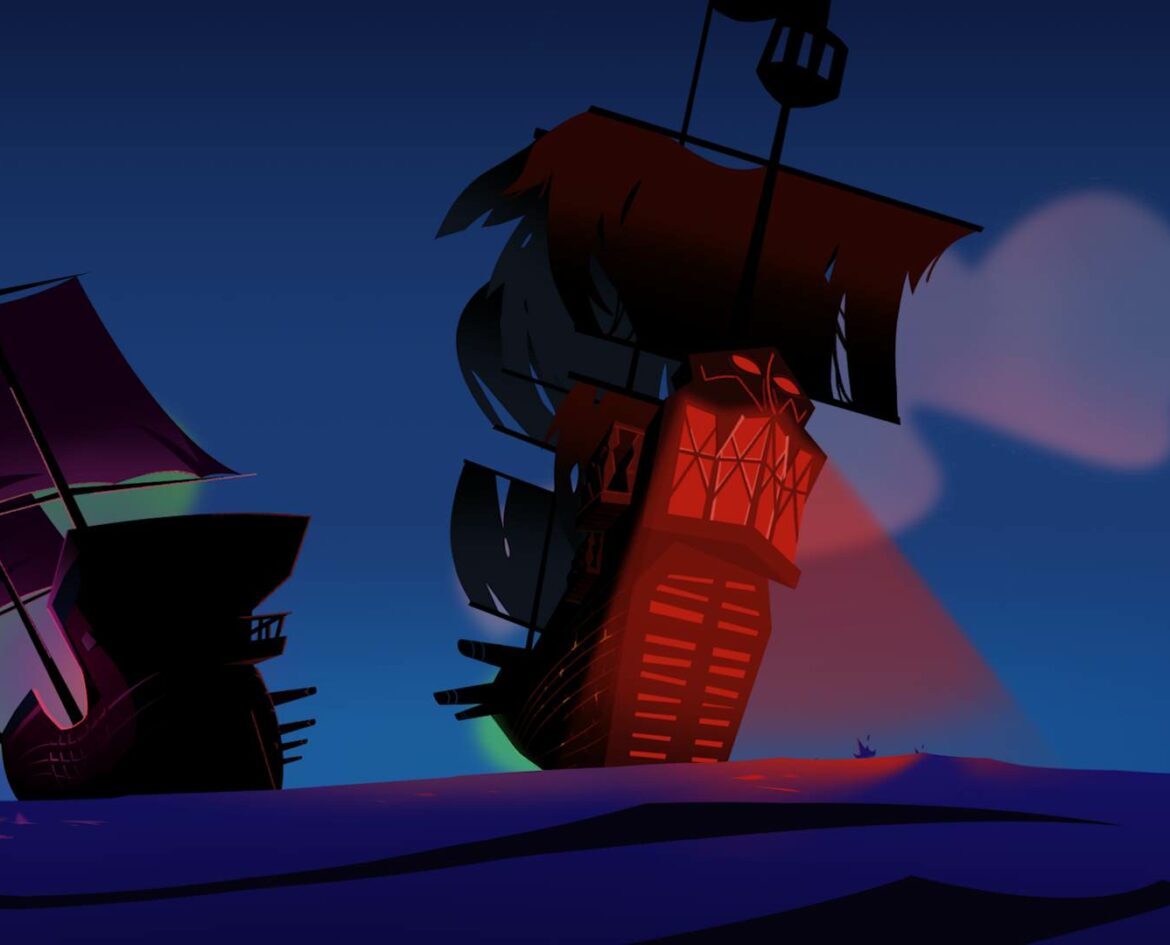 The music of the Monkey Island series is iconic and the music from Return sticks with that. Starting the game up and hearing the iconic island drums and pan flute just washed over me with a wave of nostalgia. The theme is just a jovial upbeat tune. Contrasting that is the low and slow beat of LeChuck’s theme. The menacing feeling lets you know you’re in trouble.

The game’s iconic main theme, given a gorgeous tropical vibe.

LeChuck’s theme, which is as menacing and foreboding as the dread pirate himself.

Apart from those two the themes for the islands and shops help set the mood for your island hopping adventure. Whether it’s the solemn tune of the Scumm Bar, the haunting melody of Terror Island or the upbeat feel from Barebones Island, there is always the right tune for the right moment.

Return to Monkey Island is a fun puzzle adventure that will keep new and returning fans entertained for a decent while. The gameplay is solid and smooth, I couldn’t find any fault in it, it’s just a great point and click adventure game. The story is an enjoyable tale and the visuals are very pleasing to see. I guess if I had one grievance, I just wish the game were longer. Monkey Island games have always been fun and hilarious, I just wish there was more of them.

A review code was kindly provided by the publisher for the purpose of this review. Return to Monkey Island is available on PC, Xbox series X, PS5 and Nintendo Switch and is currently available on Xbox Game Pass. If you enjoyed this review, be sure to check out more of our reviews and articles here!

Return to monke with classic point & click gameplay in this retro revival.