The impressive gaming laptop from ROG that proves one screen just isn’t enough. Discover an innovative design that pushes technology to its limits in our ROG Zephyrus Duo 16 review.

Since their invention in the 70s and rise to popularity throughout the early 2000s, the design of laptop computers has remained mostly unchanged. The tried and true folding design has always been a staple of portable computing. With recent advances in technology, companies are pushing the boundaries of design, creating more ambitious devices: ultra-thin notebooks, folding and detachable touch screen displays, and powerful gaming laptops that rival desktop counterparts at a fraction of the size. Challenging the laptop market with an entirely unique design, ROG (the gaming division of ASUS) further push the boundaries of design with their dual-screened ROG Zephyrus 16 Duo. This powerful gaming laptop features not only top-tier specs, but like the love child of a gaming laptop and a Nintendo DS, includes an in-built second screen that doubles as a touch screen. So is the Zephyrus 16 Duo a design that will finally break the mould of laptop design? Or is this a fancy gimmick that won’t last the test of time? Find out in our ROG Zephyrus 16 Duo review.

Upon first glance, the Zephyrus Duo 16 sports a sleek, no-frills exterior, with an all-black chassis that doesn’t quite scream “gaming laptop“. To avoid smudging the device with fingerprints, the surface of the lid has been coated with an anti-fingerprint finish, meaning it retains the attractive matte appearance as best possible even with extended use. Aside from the distinct ROG logo, the exterior shell of the laptop is quite minimalist and deceptively simple compared to what lies beneath the hood.

Opening the lid is when the device really comes alive. In seconds, the Zephyrus Duo 16 literally transforms into one of the most aesthetically stunning devices ever created. Its simple design is replaced by waves of RGB, sleek edges and narrow bezels, and of course, the impressive secondary screen that glides satisfyingly into place as the lid is lifted into position.

Let me tell you, opening and closing this laptop never gets old.

You’ll immediately be greeted by an RGB backlit keyboard, with a 1.7mm travel distance for speed and accuracy across both games and productivity. Rather than positioning the device’s touchpad in the centre, it’s instead slotted to the right side of the keyboard and also doubles as a numpad. It’s a sleek design and at almost 6cm x 10cm provides excellent usability. That is, of course, if you’re right-handed. 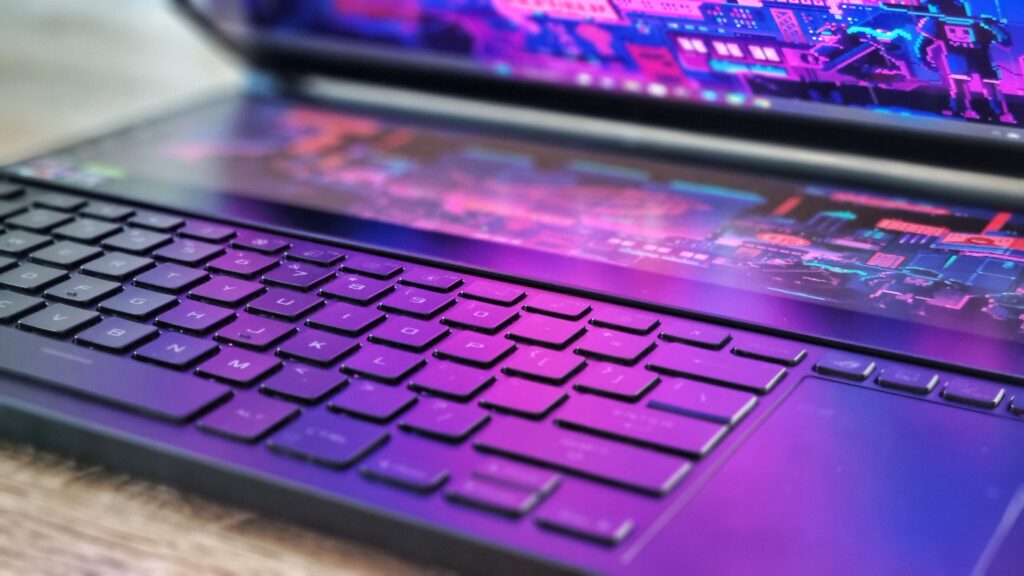 As a left-hander myself, the positioning of this touchpad was incredibly awkward and inconvenient that made it tedious to use. So keep this in mind if you’re a lefty and looking for a laptop to take on the go. But forget about the touchpad (who doesn’t use a mouse, anyway?), because this laptop is all about two things: the displays. 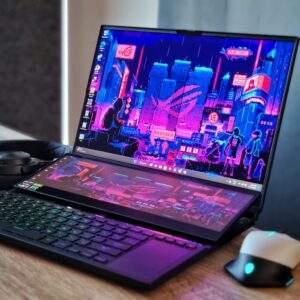 Those who opt for the top-of-the-line model of Zephyrus Duo 16 will be treated to the gorgeous colours and lightning-fast responses of the the ROG Nebula miniLED HDR panel. This stunningly vibrant screen is easily one of the most impressive in a laptop to date, and would make you question why you’d even bother plugging in an external display. At a 16:10 QHD resolution (2560 x 1600) and 165Hz refresh rate, the main screen features a peak brightness of up to 1100 nits for brighter, more vibrant colours. The main display also incorporates dynamic dimming, meaning bright areas of the screen cause less of a “blooming” effect that impacts some other HDR displays.

But as if one impressive display wasn’t enough, the Zephyrus Duo 16’s distinct design includes the distinct ROG ScreenPad Plus, a secondary 4K touch screen display at 3840 x 1100 resolution. This additional display sits seamlessly on a crank wheel hinge that’s been created with usability in mind, effortlessly gliding open and closed and lifting the screen into place. Acting as a second monitor, windows and games able to be easily shifted onto the lower screen via mouse, or instead using drag & drop on the touch screen through the pre-installed Screen Xpert software. 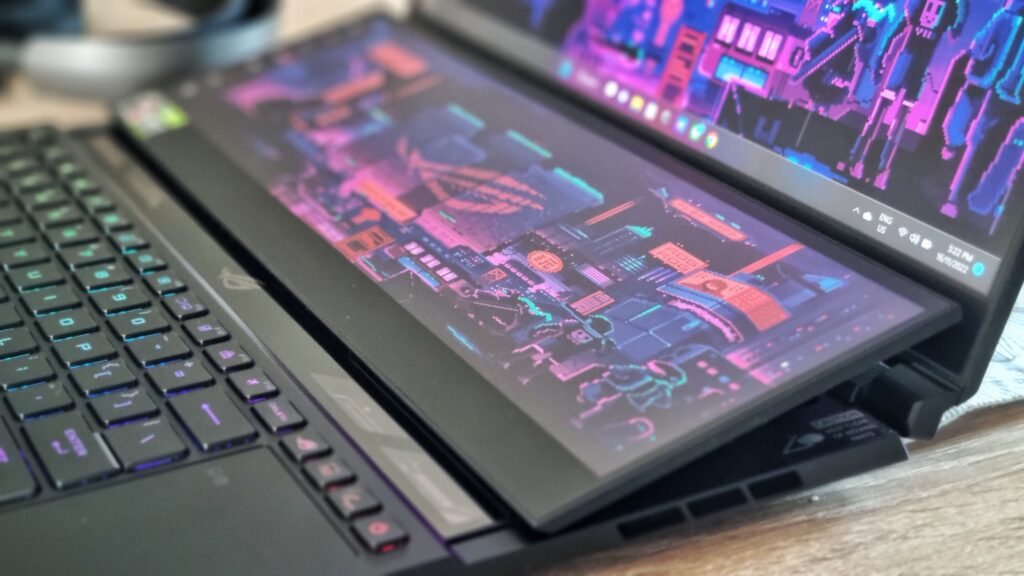 All in all, it’s an incredibly eye-catching design that’s built to impress. There’s no other laptop quite like the Zephyrus 16 Duo with it’s distinct dual-screen design that lays beneath the unassuming exterior. But does the Zephyrus have the practicality to match its impressive aesthetic?

From the moment you unbox and set up the Zephyrus, it should be clear that this laptop is a beast. This is no ultra-thin notebook that can be slotted into a handbag; no, this is an uncompromised gaming laptop entirely focused on performance. But even despite that, it still manages to be reasonably ergonomic at 2.6kg and a maximum width of just over 2cm when closed. So for a fully specced gaming laptop, it’s still reasonable to take the Zephyrus on the go. Battery is adequate for a laptop with a design and specs as impressive as the Zephyrus, which is pleasantly surprising given its dual screens mean increased power consumption. The 90Whr battery comfortably accommodates ~3 hours of gameplay (varying based on usage), but don’t expect an entire day’s worth of use without being away from the charger.

And while the lower screen is a gorgeous addition to the overall design, making multitasking possible without the need for an external display and allowing for swift setting changes on the go, it wasn’t a feature I found myself using too often. Why is that, exactly? When in-game, the ScreenPad essentially acts as a second display, meaning any time you touch the lower screen (e.g., changing a song on Spotify, changing laptop settings), the game thinks you’ve navigated away and will pause.

This isn’t always the case, as certain software like Dying Light 2 (above) cleverly integrate the ScreenPad into gameplay, acting as an inventory or quest hub. It’s legitimately like an oversized, beefed-up Nintendo DS! The device of my dreams! Unfortunately, games with this capability are few and far between. For the remainder of games, the practicality of the ScreenPad Plus while in-game is minimal.

The particular model of Zephyrus Duo 16 that was tested in our review included an NVidia GeForce 3080 Ti and an 8 core AMD R9 6900 HX CPU, 32GB of DDR5 RAM, and a 2TB PCIe 4.0 SSD. This combination of high-spec components means that the Zephyrus is capable of handling pretty much any graphical experience you can throw at it.

Certainly on the laptop’s QHD or the base model’s 1080 resolutions, framerates will rarely dip below 60fps in the majority of games, even on the highest graphical settings. This is only limited during 4K gaming, as the device can’t quite achieve smooth framerates on “ultra” graphical settings in detailed games like Death Stranding or A Plague Tale: Requiem, but can comfortably achieve an enjoyable experience on medium – high with proper optimisation.

To further change performance based on user requirement and cater towards every experience, ROG has included a variety of in-built profiles that can be selected on the go. These operating modes will alter performance accordingly, while also adjusting the fan speed and noise. By default, this is set to performance which runs at approximately 40dB, but if you’re recording audio, you can swap the profile to Silent to ensure minimal background noise.

Lastly, it’s important to pay attention to the available inputs and ports available on the Zephyrus Duo 16. For a laptop, it’s essential that adequate ports are available so that the device can easily be used without the need for additional peripherals and accessories, reducing portability (sorry). So what ports does Zephyrus Duo 16 include? 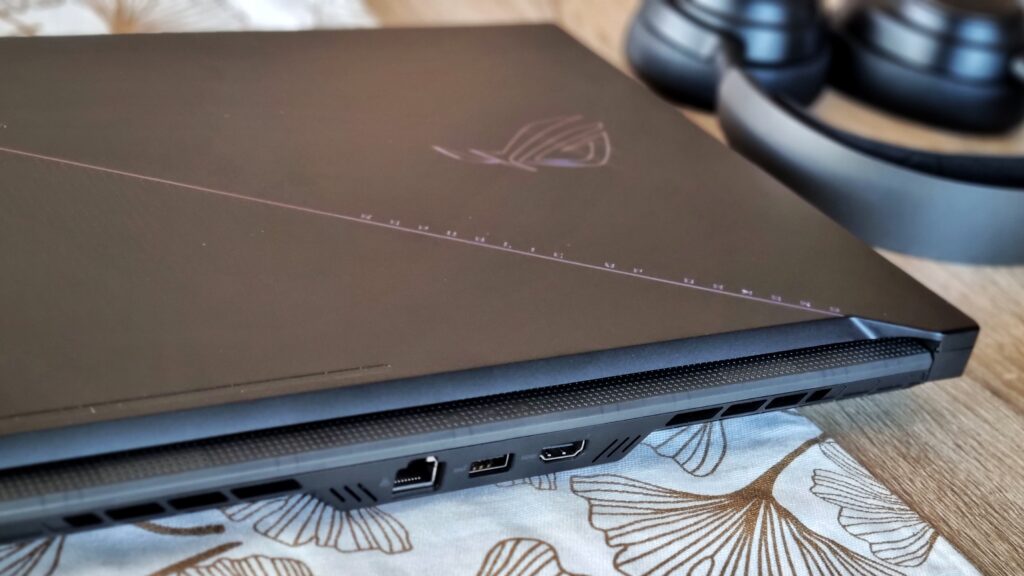 The rear of the device, with LAN, USB, and HDMI. But no power?

While there are plenty of input options to suit most of your needs, there’s one questionable design choice. Rather than placing the power port at the rear of the unit (like most devices), it’s instead situated on the left hand side directly next to the USB and headphone jack. This led to cords getting tangled or in the way of plugging in the USB, which although a minor inconvenience, would have been avoided were the port located on the rear of the unit.

Looking for a laptop that’s quite literally built to impress? You can’t go past with ROG Zephyrus Duo 16. With its eye-catching dual-screen design, top-tier specs, and stunning displays, this is a gaming laptop that pushes the boundaries of design. Though in terms of practicality, the unit’s unique ScreenPad Plus isn’t quite given the software support it deserves and is sorely underutilised. But for gaming on the go combined with the multitasking functionality of a second screen, the Zephyrus is a device that never fails to draw attention every time you open the lid.

Get the best deals on the ROG Zephyrus range here!

A review unit was kindly loaned by ASUS Australia for the purpose of this review. If you enjoyed our ROG Zephyrus Duo 16 review, be sure to check out more of our PC and hardware reviews.