Be greater (on PC). Be yourself (…on PC). Discover Sony’s latest port as Spidey swings onto PC again in our Spider-Man: Miles Morales PC review!

Playstation has been knocking it out of the park with their PC ports in recent years. From Horizon: Zero Dawn to Days Gone, titles that were originally only playable on the consoles have hit computers with massive enhancements to quality. These allot the games a new audience and have gone off without a hitch, as most of their titles sit with an “overwhelmingly positive” review score on Steam, including August’s Spider-Man Remastered port. Now just a few months later, the spinoff and PS5 launch title, Spider-Man: Miles Morales is getting the same treatment. 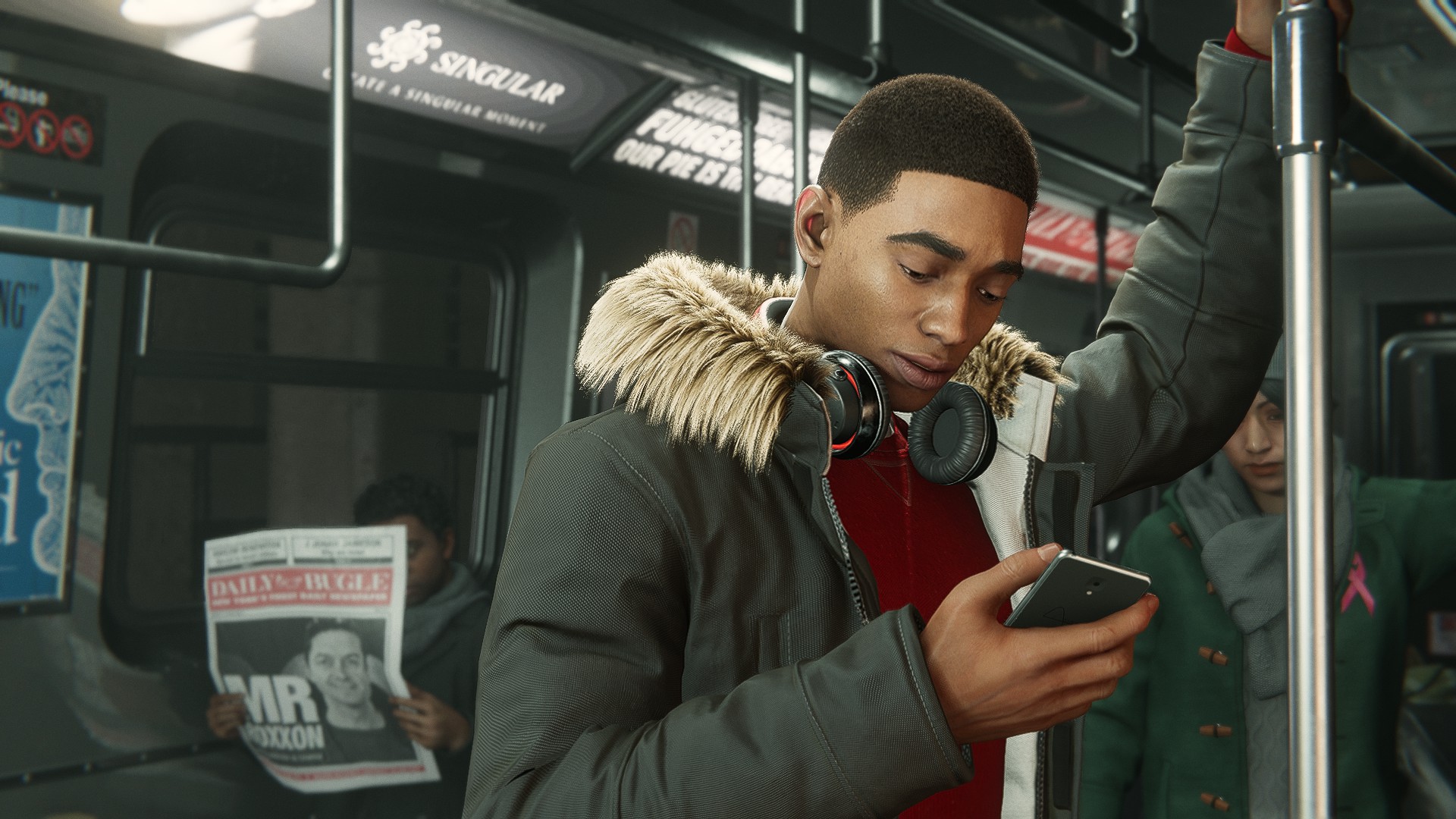 The specific enhancements that Playstation games will get on PC include ultrawide support, uncapped framerates, ray-tracing, and support for Nvidia DLSS/HDR scaling. In layman’s terms, these titles make full use of the unlimited hardware potential on this platform, all the while still being accessible for those with more modest setups. As the “Amazing Ray-Tracing” requirements for Spider-Man: Miles Morales demand an RTX 3080 (which is coincidentally the card being used in this review), players can get by with the bare minimum of a GTX 950 (a card released in 2015). A tale of two Spider-Men; Miles learns the ropes with help from Peter Parker, with special training scattered about Harlem.

While it’s nice to max things out and see lifelike visuals, that’s not to say cheaper PCs can’t still deliver an entertaining experience. So, how does the game transition to PC, and does it stay on-par with games like Uncharted: Legacy of Thieves? Swing into our Spider-Man: Miles Morales PC review below!

Warning: spoilers for Marvel’s Spider-Man in this section.

While Miles Morales may be a household name for superhero fans thanks to Spider-Man: Into the Spiderverse, his only appearance in games prior to Marvel’s Spider-Man was relegated to titles where he was never the focus. When Spider-Man released on the PS4 in 2018, though, Miles was a playable character in stealth bits, but he didn’t quite have his spider bite until very late in the game. When the titular web-slinger found out about Miles’ powers, they both relished in the fact that this town was big enough for two Spider-Men.

As such, Spider-Man: Miles Morales starts off with a routine stake-out gone wrong, as Rhino goes on a rampage through New York. It’s during this encounter that we learn that Miles Morales has an electric touch to his powers – handy in a bind that saves Peter Parker’s “bacon”. Miles is tasked with facing not just petty criminals, but both The Tinkerer and Roxxon Corp. They won’t go easy just because Miles is a teen – this game is a worthy challenge on higher difficulties.

Immediately after this big showdown, Peter skips town with MJ and leaves the city to Miles. This learning curve is daunting for the high-schooler, but Miles is up to the task and has admirable confidence. It’s evident in no time, though, that balancing the great power and great responsibility is a lot tougher than Miles thought. Encountering people from his past shows how engaging and steadfast Miles Morales is with the people he cares about, whereas his coming-of-age shows its face in his naivety and overtrusting tendencies.

Miles Morales is a massively complex hero, but is always someone you root for and is a blast to play as. Where dialogue becomes a point of contention in AAA games, it’s nailed in Spider-Man: Miles Morales with endearing characters, a fast-paced plot with no padding, and a memorable ending that could very well bring you to tears.

Superhero games saw a surge in popularity a few console generations ago, when the Batman: Arkham trilogy showed just how gratifying it was to play as the caped crusader. While I have extremely fond memories of Spider Man 2 the generation before, the Spider-Man games of the Xbox 360/PS3 era were middling and never reached the same heights.

Thankfully, Marvel’s Spider-Man was a massive win for the franchise, becoming one of Sony’s quickest-selling IPs and warranting this spin-off, which served as a launch title for PS5, complete with haptic feedback and ray-tracing on the new console (you can connect a PS5 controller to the PC version and feel the haptic for yourself!).

While the Arkham formula of combat is still standing the test of time, what Insomniac has done to expand on it in these games is nothing short of a miracle, as it amps up the speed, the danger, the gadgets, and everything in-between to make for outstanding battles.

Traversing the open-world in Spider-Man games is almost always a dream come true, but it’s never been done better than in Spider-Man: Miles Morales. With a smaller size than Marvel’s Spider-Man, this actually serves to the game’s benefit as it feels less barren and more intimate. While Peter Parker swings with precision, Miles Morales web-swings with a bravado that is so stylistic that it’s captivation never loses its luster from start to finish.

It’s almost pointless to fast travel, as the map is scattered with collectibles, but unlike some random pages to chase in Assassin’s Creed, Miles Morales has meaningful busywork, such as manifesting trap beats from the sounds of the city, to finding nostalgic memories made with an old friend. 100%ing Spider-Man: Miles Morales feels less like a job and more of a delight to accomplish. This is the tightest combat that a Spider-Man game has ever felt, and is must-play territory even if you’re a casual fan.

Music is a big, BIG focus in Spider-Man: Miles Morales. From the title screen where Miles has headphones in, to the Jaden Smith track playing after the excitement of the first mission, it’s a staple engrained into the identity of Miles Morales. John Paesano’s score is intelligent with its use of hip-hop beats masterfully-mixed with a symphonic backdrop.

The voice acting from Nadji Jeter is a stellar, natural performance, and the returning Yuri Lowenthal doesn’t pull any punches in his Peter Parker delivery. Troy Baker as a smarmy, detestable antagonist is delightful, and Darin De Paul’s fuming J. Jonah Jameson is hysterical. With headphones on, the wind in your ears as you swing through Harlem makes for unreal immersion.

Announced about a week before launch, Spider-Man: Miles Morales is verified for the Steam Deck. Essentially, what that means is that the game is optimized to work on Valve’s portable PC, making for a strong experience. I pulled mine out to test this, and can back up the claim – with a catch. You’ll have to tinker with the display settings if you plan to play on both a high-end gaming PC and the Deck, as the graphics settings are retained between each platform and my PC with an RTX 3080 doesn’t match the performance of the Steam Deck. The game is still a looker and holds a consistent framerate on the Deck, but if everything is maxed out, it will default to about 30 frames per second instead of 60. Nothing a quick switch can’t fix!

I knew I’d be a bit biased going into Spider-Man: Miles Morales on PC – not only because I’m a fanatic of the web-slinger, but because I already experienced it in full last winter on my PS5. That being said, there’s never a bad time to revisit a game that you love, and doing so on a beefy PC made for an amazing time during my PC playthrough. Spider-Man: Miles Morales PC runs like a dream, is full of gusto, and is just a joy from start to finish. While some may decry it for being shorter than Marvel’s Spider-Man, it’s more of a case of never overstaying its welcome.

It’s rare that I suggest a game be purchased full-price, but if you’re a fan of Spider-Man and can’t get your hands on a PS5 yet, this is the best way to experience one of Sony’s best IPs to date. Spider-Man: Miles Morales PC gets my full recommendation.

A review code for Spider-Man: Miles Morales was provided courtesy of PlayStation for the purpose of this review. Be sure to check out more of our reviews here and discover more epic Sony titles like God of War: Ragnarok!

Spider-Man: Miles Morales is the latest Playstation exclusive to hit PC! How does the PS5 launch title hold up on a computer? Check it out in Mike's review!