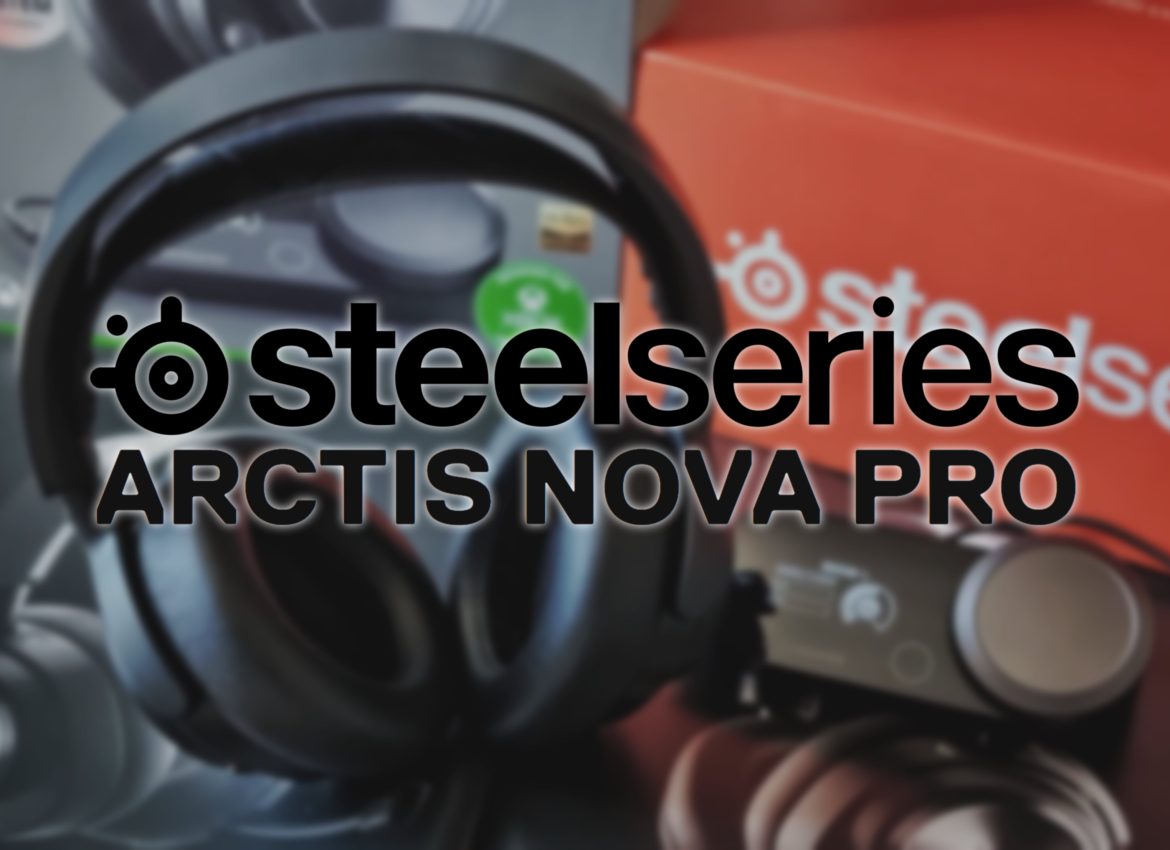 So you’re in the market for a decent gaming headset? In theory it’s a task that seems simple – pick a model that looks nice, sounds even nicer, and doesn’t detract too much from your excess gaming funds. Though that simplicity couldn’t be further from the truth; choosing a gaming headset can be a daunting task due to an overwhelming amount of choice. With quite literally hundreds of options on the market, ranging from bargain bin options with tinny audio through to impressive audiophile-quality headsets that can set you back the cost of a console, it can be a surprisingly tricky decision.

SteelSeries are thankfully here to make that task a simple choice, offering a market-leading headset for users wanting only the best audio experience: the Arctis Nova Pro. Sporting impressively high fidelity speakers with powerful bass, seamless console and PC compatibility, and a unique “GameDAC” hub for altering audio on the go, the Nova Pro goes beyond any other gaming headset on offer.

For the purpose of this review, we’re getting hands and ears on with the Xbox-branded Arctis Nova Pro (wired model), which interestingly is compatible not just with Xbox, but also PC and all other modern consoles. So read ahead and find out why you should seriously consider the Arctis Nova Pro as your next choice of headset.

Immediately upon unboxing the Nova Pro, it’s obvious that this headset chooses to be sleek, streamlined, and understated, the complete opposite to many of the colourful, angular, RGB-covered choices available. With a PVD-coated matte black finish complimented by metallic accents, rounded foam earcups on pivoting hangers, a discreet retractable boom mic, and a textured tension band to support at the top of the headset, this design feels more suited to a studio than a gamer’s couch. For those wanting to customise the look of the headset, SteelSeries offers speaker plates and headbands that can be easily swapped out and customised with a variety of colours. Sleek and professional – this isn’t exactly a headset that screams “Hey! Look! I’m a gamer!”

This is paired with the GameDAC, an external device which not only acts as a hub and amplifier for the headset, but a means of quickly swapping settings on the go. Embedded in the surface of the GameDAC is an adorable monochrome OLED control screen, which displays settings and allows for a variety of audio adjustments. With an elegant aesthetic to match that of the headset, this accessory too is rounded with a black metallic finish. This is the one time you do actually want to get DAC’d.

But enough about how the headset looks. More importantly, how does it sound?

Incredible. It’s no exaggeration to state that the Nova Pro will make games, music, and films sound better than ever before. This can be accredited to the impressive high-fidelity 40mm drivers, which have been designed specifically for SteelSeries’ Sonar software to provide fully-immersive 360° spatial audio. By utilising a 5.1/7.1 surround sound track, the Nova Pro replicates directional sound unlike any other gaming headset available. Having tested it out in games like Resident Evil 2 and Returnal, both of which are praised for their phenomenal 3D audio, the Nova Pro enhances immersion and accuracy allowing the player to pinpoint exact enemy placement with precision. Transparency Mode/Noise Cancelling can be conveniently activated at the press of a button.

But it’s not just the immersion that deserves praise – when used in combination with the GameDAC, users will experience true clarity, with crisp and punchy audio across any game, music, or other media. Taking advantage of its USB-C connections, the Nova Pro can deliver an audio resolution up to 96KHz/24-Bit, creating absurdly detailed audio. It’s quite surreal to listen to songs that have been played a hundred times and detect details that were previously not even audible. This headset goes far beyond its applications in gaming, and can easily be utilised by audiophiles as a studio headset. The only drawback is its active noise cancellation (ANC), which claims to filter out unnecessary background sounds through a 4-mic hybrid system – living on a busy road, this wasn’t quite enough to remove all background noise. 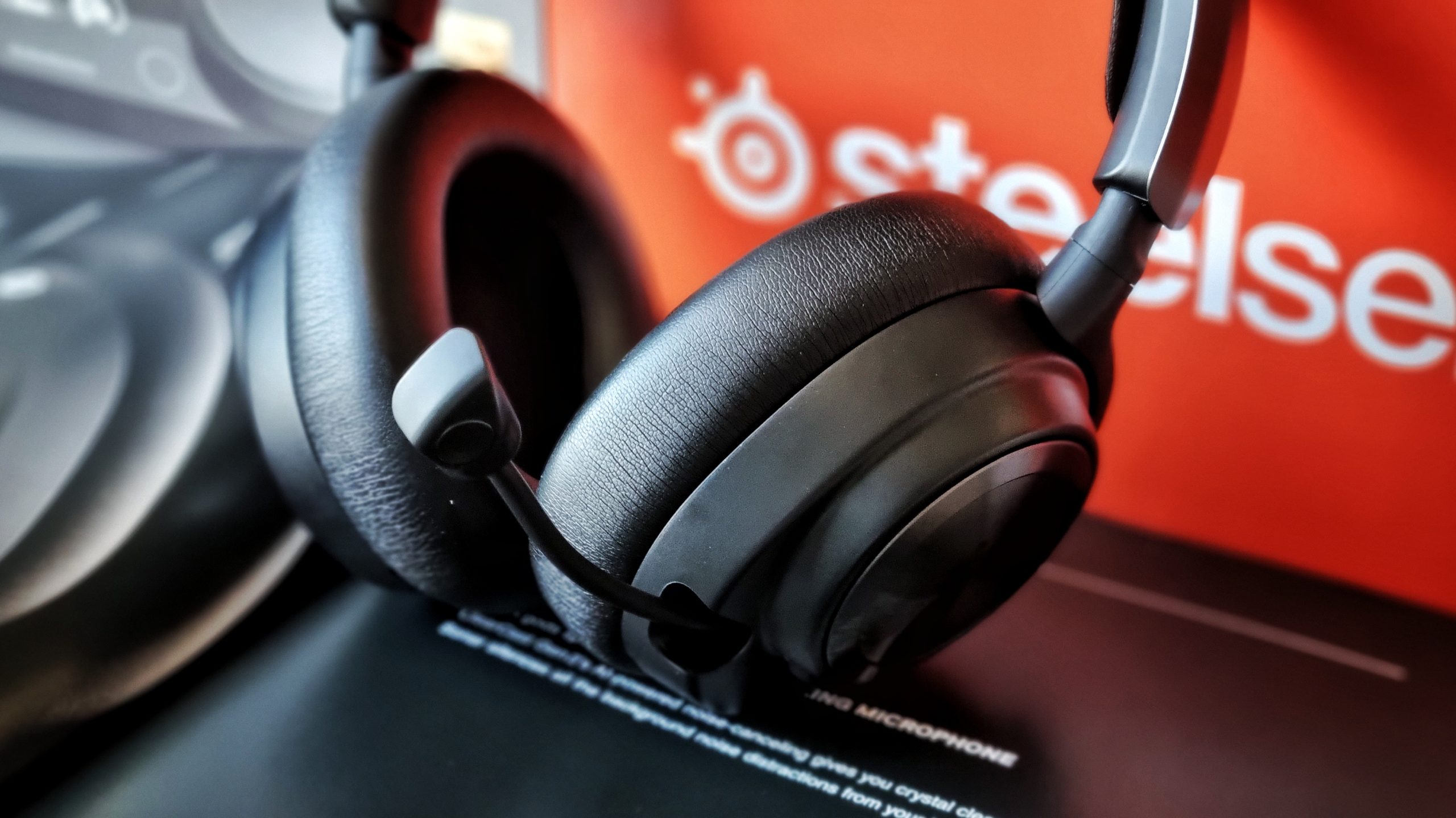 They’ll hear only what you want them to hear thanks to the AI-powered noise cancelling microphone.

When recording audio, the headset is of an equally high standard, with an AI-powered ClearCast Gen 2 boom microphone to detect and remove any unnecessary background audio. This works especially well when cutting constant background noise, like the low hum of a PC, rattling fans, or even an excessively-clicky mechanical keyboard. However, louder noises like the screaming parrot that lives in my house, will still be picked up by the microphone. Thankfully, microphone volume and sidetone can be adjusted on the go at the press of a button by using the GameDAC.

That brings me to one of the most impressive components of the Arctis Nova Pro: the GameDAC. This accessory is bundled alongside the headset and gives the user access to a powerful amplifier and audio modifier, which is surprisingly easy to use and optimise audio on the go. With a crisp OLED screen, buttons and scroll wheel, users can change volume, equalisers, microphone settings and even manage inputs in the palm of their hand. The GameDAC adds a level of customisation not previously offered in any other gaming headset. Being able to alter audio settings in seconds, especially on a PlayStation 5 or Nintendo Switch, is a literal game-changer.

Surely someone will figure out how to run DOOM on this thing.

Comfort is a topic often all too overlooked when discussing headsets, particularly if expected to wear one for hours on end. Thankfully, SteelSeries have addressed this with the design of an adjustable tension band which can be altered based on user preference, even to the point where the headset feels virtually weightless. This detail paired with the soft foam earcups allow for extended sessions with no discomfort at all. There were days where I barely removed the headset, and still felt perfectly comfortable, unlike the tension and strain some other headsets might place on the user’s head. Style, sound, and comfort. The Nova Pro has it all.

Impressively, the Arctis Nova Pro for Xbox can be used seamlessly with any modern console, PC, and even mobile via its USB-C inputs. The Xbox is merely branding and the addition of an extra USB-C port exclusively for use with Xbox, whereas the PC/PS5 version of the Arctic Nova Pro is incompatible with Xbox. So really there are no downsides to choosing the Xbox model – in fact, it’s the better choice overall. Throughout my time with the headset, I used it extensively on Nintendo Switch/Xbox One X/PlayStation 5/PC and encountered no issues at all. Despite the need to constantly shuffle around cords, it’s an incredibly efficient all-rounder that can be used on any platform.

Lastly, it’s worth mentioning that the free SteelSeries audio software designed specifically for the Arctis Nova Pro enhances the user audio experience even further. Known as SteelSeries GG, this simple program gives users the option to alter headset settings, build powerful equalisers, and activate “Sonar” spatial audio based on each individual game. This user-friendly software is particularly helpful for creating your own user-generated audio profiles, which can be swapped within seconds. 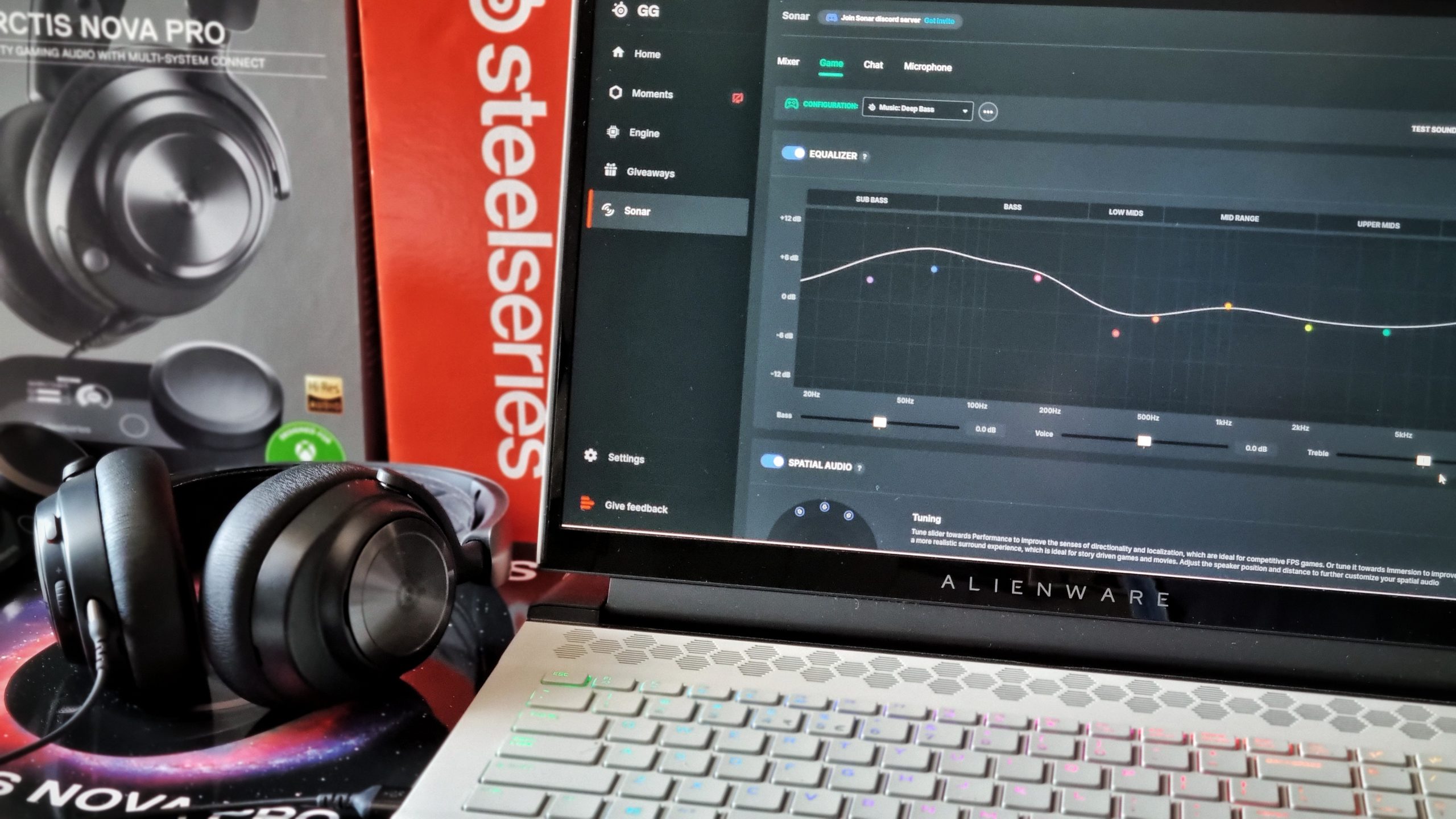 If using the Arctis Nova Pro on PC, SteelSeries GG will greatly enhance the user experience.

For example, over the weekend I was listening to ABC Classic’s countdown of the top 100 film/TV/game soundtracks, and could optimise the audio for each individual soundtrack with ease, precisely altering bass/mids/highs. So for users who listen to a lot of music and what to enjoy it in the best possible quality, this is the perfect choice of gaming headset.

Unparalleled audio fidelity, impressive user customisation, and a wide range of device compatibility make the Arctis Nova Pro the ideal headset for players wanting the most from their audio experience. By combining industry-leading hardware alongside a variety of clever AI, powerful software through the added GameDAC and SteelSeries GG program, SteelSeries have crafted the ultimate gaming headset. Don’t fret about the overwhelming choice when faced with which headset to buy, just go straight for the Arctis Nova Pro.

A review unit of the Arctis Nova Pro for Xbox was provided for the purpose of this review.
You can read more of our reviews: HERE.