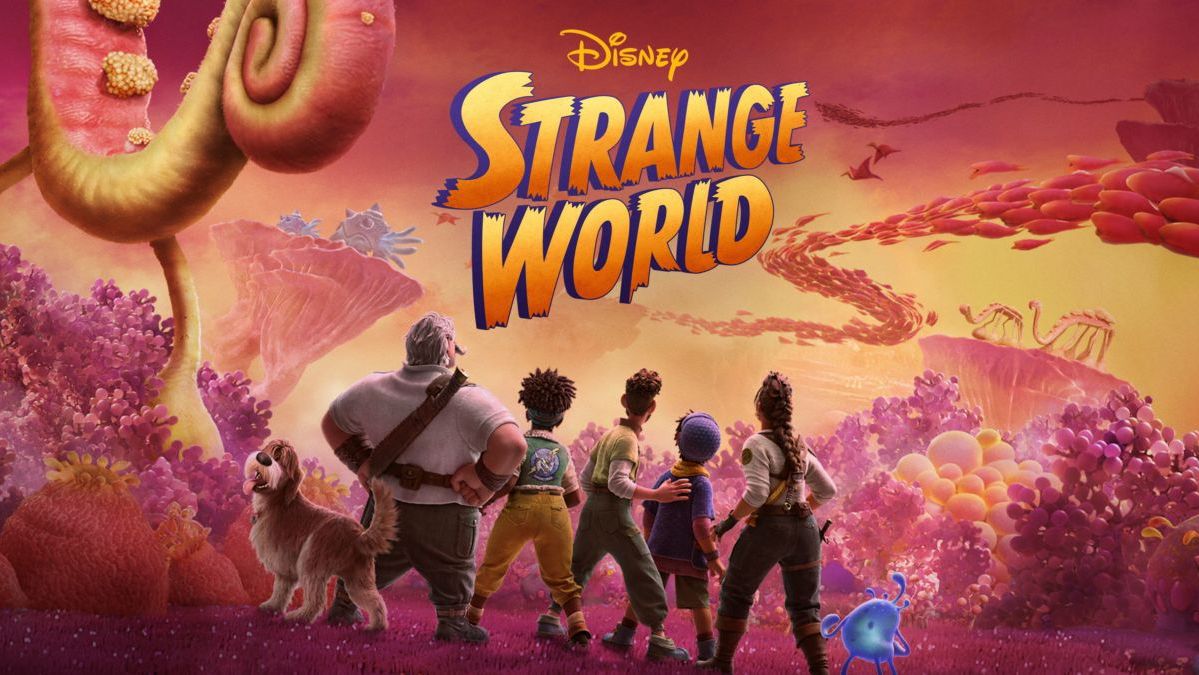 Discover a world of pure imagination delivered through Disney animation in our Strange World review.

There’s no denying that throughout their 100 years of animation, The Walt Disney Company have transported viewers to numerous incredible worlds through their superb animation. From fantastical kingdoms both on-land and under the sea, worlds filled with living toys or incredible superheroes, and even virtual worlds where videogames come to life. If you can imagine it, the talented animators at Disney are able transport you there.

Celebrating 100 years of wonder, Disney have added a touch of magic to many of our childhoods.

But what if Disney took this concept one step further? What if they instead focused on creating a film entirely dedicated to the world in which it was set? That’s exactly what you’ll explore in Strange World, the 61st animated film from the studio and from director Don Hall (Big Hero 6, Moana). Strange World draws influence from retro science-fiction and launches viewers into a hostile and extraordinary environment that rests deep below the land of Avolonia.

So how does the latest film hold up against the entire century of worlds that Disney have crafted? Well, get ready to explore the strangest one yet in our Strange World review.

WARNING: some minor plot spoilers ahead.

Jaeger Clade! Adventurer and explorer extraordinaire! In the entire history of Avolonia, none have been as mighty, dashing, and daring as this formidable hero. With their humble village nestled within a towering ring of impassable mountains, Jaeger won’t rest until he conquers its peaks and achieves his one life goal: to find out what lies beyond. Exploring is in his blood, after all.

Nothing says “father-son bonding” like climbing a deadly mountain.

Accompanied by his trusty companions and his teenage son, Searcher Clade, the expedition team set off on yet another adventure climbing the frosty pinnacles and treacherous caves. As the team make their way towards yet another summit, Searcher stumbles across a fascinating plant unlike any they’ve ever seen, named Pendo. A plant that gives off a green glow and a powerful energy: electricity.

A young Searcher Clade faces his greatest challenge yet: his father.

Astonished by this discovery that could change civilisation itself and rapidly advance the technology of Avolonia, Searcher and the party decide to turn back. Well, almost all the party. This decision is adamantly opposed by the foolhardy and headstrong Jaeger, whose stubbornness leads to his doom. Desperate to continue climbing the mountains and greatly disappointed by his son, he ventures off into a blizzard by himself, never to be seen again…

How to avoid paying child support.

Twenty five years pass and now Searcher is hailed as the hero of Avolonia, harnessing Pendo and providing electricity and modern technology to the city. Rather than following in his father’s footsteps, Searcher gives up a life of exploring and instead chooses to become a humble Pendo farmer, settling down with a loving wife and their son, Ethan. But as much as Searcher refuses to admit it, he’s more like his father than he cares to admit, and exploring is in his blood.

The new Clade family: Ethan, Meridian, and Searcher, set off for adventure.

Now with an unknown disease beginning to spread across Pendo, sapping it of its energy, Searcher is unwillingly enlisted on an expedition to uncover the source of this blight. Accompanied by his son and president of Avolonia and Jaeger’s ex-companion, Callisto, the team delve into a colossal crater only to discover the Strange World below.

Don’t be fooled by its colourful exterior – Strange World may appear on the surface to be a playful romp through a whimsical world, but it deals with some surprisingly heavy themes. Throughout the film’s entire duration, there is a recurring theme of parental expectations and the challenge of living in the shadow of one’s parents. A topic that I’m sure many of us can relate to.

Searcher is constantly struggling with the disappointment of his father, who only ever expected his son to follow in his footsteps, while Jaeger fails to process that his son doesn’t want to be a heroic explorer like his father. To take it a layer deeper, the grandson in the relationship (Ethan), pursues heroism like his grandfather and wants nothing to do with his father’s expectations of running the family farm. It’s a fascinating family dynamic that draws out the complexity of family relationships despite the film’s cheerful veneer.

Maybe the Strangest world of all is the one we share with our family.

But it’s not all serious family drama – the vast majority of Strange World is a fantastical journey through an unknown realm. The family must learn to co-operate, save each other from unrelenting danger, all whilst fulfilling Jaeger’s dream of exploring beyond the mountains. It’s a wild ride that rarely lets up and is full of thrilling chase sequences and entertaining discovering that will please both the young children and the big kids in the audience.

Sporting a distinct visual style unlike any Disney animated film to date, Strange World adopts a vibrant palette of red and magenta to accompany the whimsical and eccentric designs of the world beneath Avolonia. Every moment is a visual delight, featuring other-worldly creatures, ridiculous environments, and absurd threats that the party must overcome during the expedition.

The film’s aesthetic clearly draws inspiration from the likes of classic sci-fi like Journey to the Center of the Earth and occasionally inserts visual sequences adapted from early 20th century comics. Adopting a variety of surreal and alien-like designs which contrast to the upper world of Avolonia, every fast-paced sequence is a treat for the eyes and is certainly best enjoyed on the big screen. This is one of the most visually-impressive Disney films to date.

So what does adventure and exploration sound like? Well it sounds like Henry Jackman, of course. This popular Hollywood composer is not only responsible for Disney Films like Wreck-It Ralph and Big Hero 6, but more recently has lent his musical talents to Uncharted 4: A Thief’s End and Uncharted: Legacy of Thieves. Jackman draws upon his huge orchestral style of the Uncharted soundtracks to craft a score that’s as fast-paced and action-packed as many of Strange World’s thrilling sequences.

Composer Henry Jackman briefly discusses his inspiration behind the soundtrack.

With well-respected actors like Jake Gyllenhaal (Donnie Darko, Spider-Man: Far From Home) and Dennis Quaid (The Big Easy, The Day After Tomorrow) voicing the lead roles, the pair bring a genuine dynamic to their voice acting that carries the emotional weight between a father and son. In contrast, the film’s comic relief, Splat (an anthropomorphised blob), despite not having any lines of dialogue at all throughout the film, manages to be one of the most engaging and entertaining characters in the film.

Sound effects too are equally on point, with the world’s mystical creatures sounding as appropriately absurd as they look. Every footstep from the Clade family lands with a disturbingly satisfying squelch as they traverse across unimaginable terrain. It’s a world that certainly sounds as diverse and impressive as it looks.

Strange World is not only a delight for the eyes and an entertaining film for viewers of all ages, but offers a surprisingly deep and insightful view into the challenges of parental expectations. It’s entertaining, amusing, and heart-warming, and the kind of film that parents should certainly watch with their children. This family adventure explores not just a Strange World filled with mystical threats and ridiculous environments, but an even stranger world beyond that: the one we share with family.

A preview screening was kindly provided by Disney Australia for the purpose of our Strange World review. If you enjoyed this, be sure to check out more of our film reviews here.

Maybe the strangest world is the one we share with our family.