Hungry for a delectable slice of Australian history with characters as colourful as 100s & 1000s? Feast on this Aussie indie gem in our Wayward Strand review.

Throughout the last decade, in recent times, and well into the future, Australian indie games have had a massive impact on the global games industry. Internationally-renowned titles like Unpacking, Hollow Knight, and Cult of the Lamb have rocketed to success, while indie gems like Necrobarista and Golf Story are still being enjoyed and discovered by new players every single day.

One such Australian indie game that deserves a place alongside these iconic Aussie titles is Wayward Strand, the charming, character-driven interactive narrative from Melbourne devs, Ghost Pattern. Drawing upon its fascinating setting and sprinkled with a vibrant cast of memorable characters, it’s time to greet the residents of the fascinating Airborne Hospital in our Wayward Strand review.

All aboard Australia’s very first Airborne Hospital, moored gracefully off the Gippsland cliffs in Victoria. Established in the late 1970s, this medical marvel serves as a fully-fledged facility catering to patients of all needs – complete with a beautiful view of the coastline. Tasked with investigating the hospital for her school newspaper and assisting the patients along the way is young Casey Beaumaruis, who also happens to be daughter of the ship’s head nurse.

Budding young journalist, Casey, is on the case(y). (sorry)

With only three days aboard the vessel, Casey must make efficient use of her time in building meaningful relationships with the residents of the geriatric ward. These elderly patients collectively possess centuries worth of knowledge to slowly unravel, including mysterious pasts, involvement in development of the flying hospital, and even important roles in Casey’s own life. Every day presents a new opportunity to strike up conversation, and forge the bond between Casey and the ship’s vibrant characters. The hospital’s characters, like Mr Avery here, are as memorable and vibrant as the ship itself.

Story is truly at the heart of Wayward Strand, with the player being given the opportunity to unravel the history of the vessel and its people through meaningful and entertaining interactions. By weaving together their histories, the player will begin to understand the intricacies of character relationships, their struggles and hardships, and even help Casey to learn a bit about herself along the way.

For a game so focused on character development, the gameplay of Wayward Strand is satisfyingly simple. Most of the game relies on one simple action: conversation. Conversing with each of the residents and responding with wise dialogue options allows Casey to take down any fascinating notes during each interaction. These notes can then be used as points of conversation with other characters, unlocking further dialogue options and interesting titbits that provide deeper insight into each of the patients.

Speaking with some of the residents might feel like talking with your grandparents, or even an old friend.

Certain situations though can’t be approached head-on, with Casey instead needing to take more of a stealthy approach. By peeking into rooms or standing nonchalant beside those too deep in conversation to notice, the player is able to eavesdrop and obtain juicy pieces of information about other residents, happenings on the ship, or even upcoming events and what times they may occur. Knowing when to listen-in on a conversation is key, and allows the game to feel more intriguing as Casey intrudes on conversation that she otherwise shouldn’t be hearing. 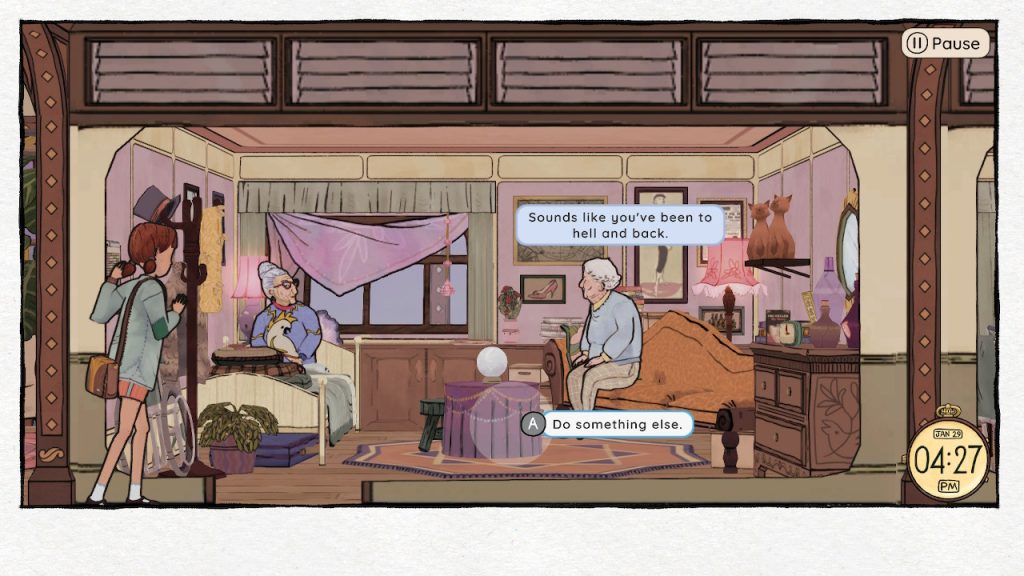 During any interaction, Casey is constantly scrawling at her notebook, recording details about the conversation and keeping track of its residents and their unique backstories. As the player progresses, this notebook eventually becomes absolutely packed to the rafters with detail, adorable sketches, and even insight into Casey’s own thoughts on the characters. It’s an excellent touch and well worth exploring after each interaction! 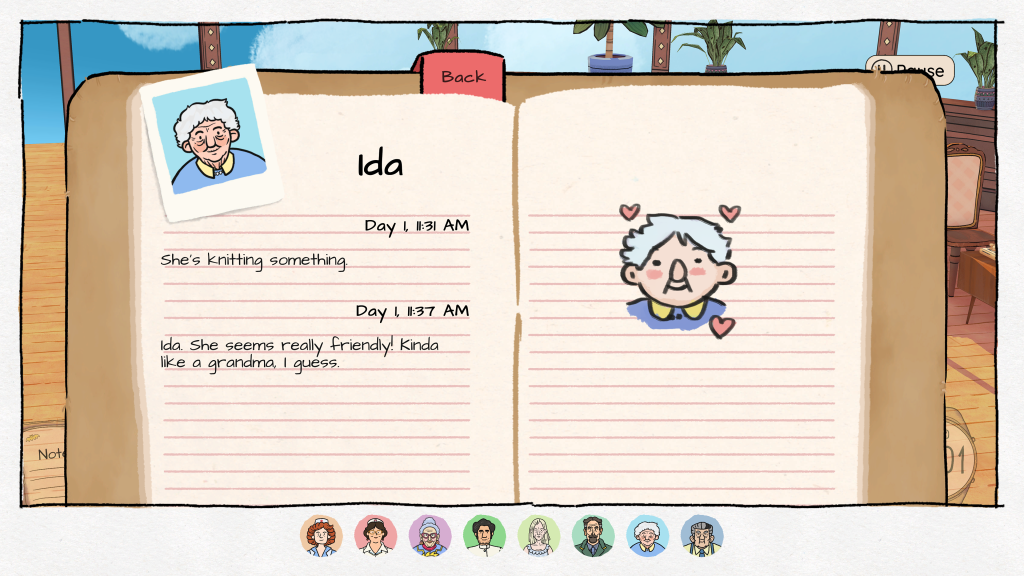 Outside of these actions, the gameplay is minimalist, with some time management required as certain events will only occur at particular times of day. The game unfolds over only three days, so managing time wisely and speaking to all of the patients is essential to get the most out of Wayward Strand’s story.

In case you’ve not already noticed from the images and footage throughout the review, Wayward Strand has an incredibly distinct visual style. Merging vibrant character and environment models with thick line-art and an adorable cartoon design, the game looks brilliant in both handheld and docked modes, with only some minor framerate drops and occasional visual bugs. This aesthetic adds a great deal of charm to traversing the airborne hospital, with each resident’s room carefully decorated with an array of their belongings related to their interests.

Credit must also be given to the beautiful concept art and backgrounds scattered throughout the game, which are displayed during the opening and cutscenes at the beginning and end of each day. Some of these feature distinct Australian environments and features of flora and fauna that any Australian will immediately recognise as home. 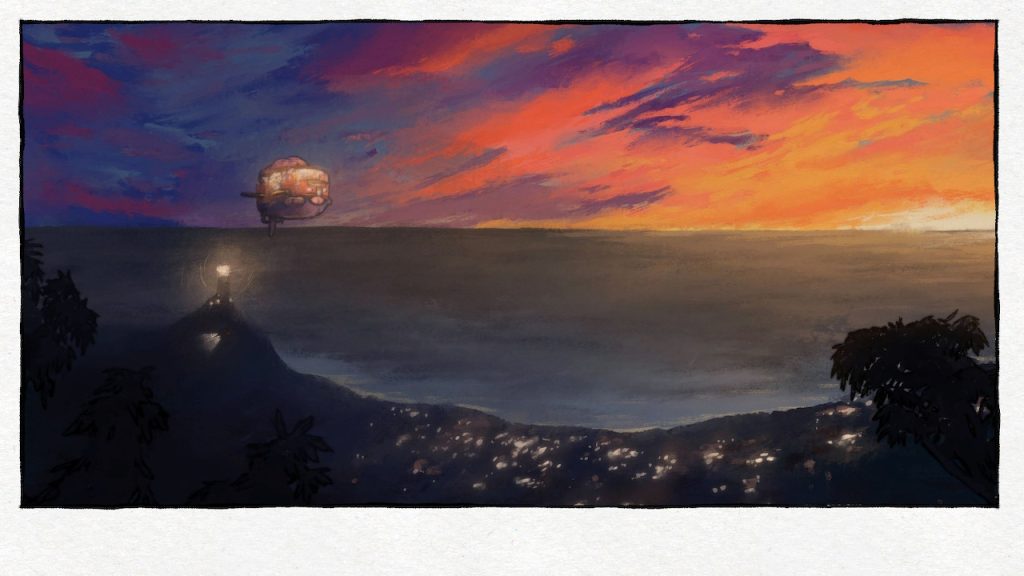 Can I hang this on my wall?

For Australians playing videogames, hearing authentic Aussie voice actors in dialogue is few and far between. Wayward Strand, however, delivers a stellar voice cast of prominent Australian actors that many of us may have heard throughout our lives, including Michael Caton (The Castle, Packed to the Rafters). Every single line is delivered with the perfect accents (both Australian and international), never forced or exaggerated, and scattered with phrases and dialogue that helps it all to feel perfectly authentic. Every single piece of dialogue throughout the game is fully voiced, and the effort that has gone into the quality of this is nothing short of impressive.

Enjoy this sombre yet amusing snippet of dialogue between two of the game’s most memorable characters.

Taking a back seat, the game’s soundtrack is subtle and more of a supporting act to the dialogue. Most of the tracks are relaxing, calm, and ambient, occasionally even including some distinctly Australian sounds for added appeal. Take a listen to a couple of the tracks below:

The menu theme, with the gorgeous sounds of Rainbow Lorrikeets and the warbling of Magpies.

Upbeat, gentle and acoustic, the Credits Theme is the perfect way to wrap up Casey’s adventure.

The main story, which lasts approximately 4 hours long, is the game’s sole content. Though that doesn’t mean the game is completely lacking in replayability. With a vast array of dialogue options, many of which can only be delivered once, Wayward Strand offers decent incentive to play through the game an additional time. Due to the game’s timed events, another playthrough may reveal conversations and dialogue options that were previously inaccessible. 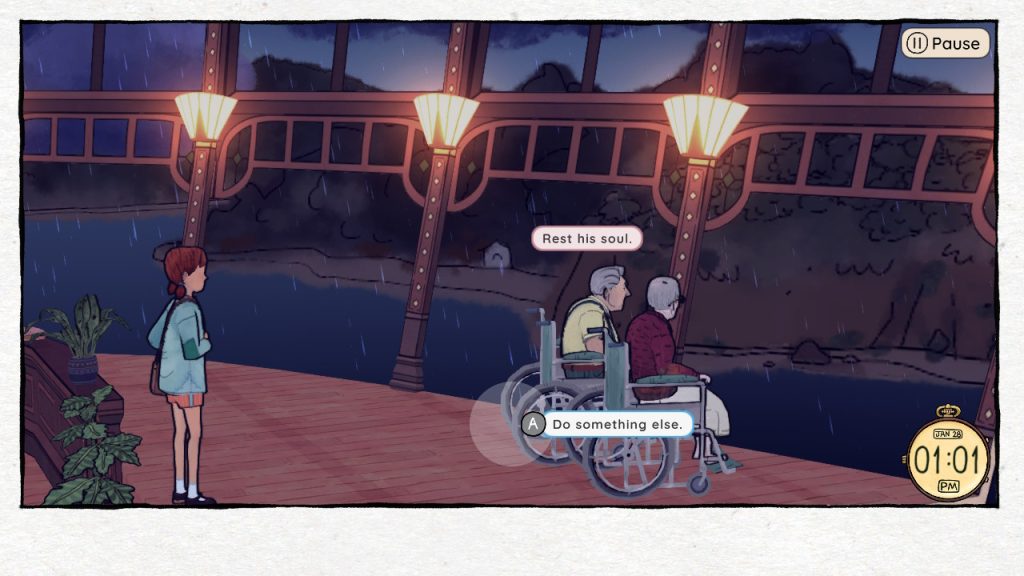 Some of the game’s most touching moments can only ever be stumbled upon.

In future, extra additions to the game like an audio library, or perhaps concept art/models for the player to view would be a nice touch. After finishing the game, it would add value if players were able to re-experience their favourite parts of Wayward Strand again without the need to play through the entire game.

Like a sizzling snag on a piece of bread, Wayward Strand is absolutely oozing with charm. The experience aboard the floating hospital is a dialogue delight thanks to its wonderful cast of unique characters, all of whom are voiced with passion and emotion. There’s really only one major downside to Wayward Strand, and it’s that after finishing it, I just wanted to keep playing, delving into the lives of each of the residents even further. This is a heart-warming tale than fans of Australian indie games must experience.

Get the best deals on all the latest Nintendo Switch games here!

A review code was kindly provided by the developer for the purpose of this review. If you enjoyed our Wayward Strand review, you can find more Australian indie game reviews and articles here.

Experience this charming and heart-warming Australian narrative that'll have your head in the clouds.