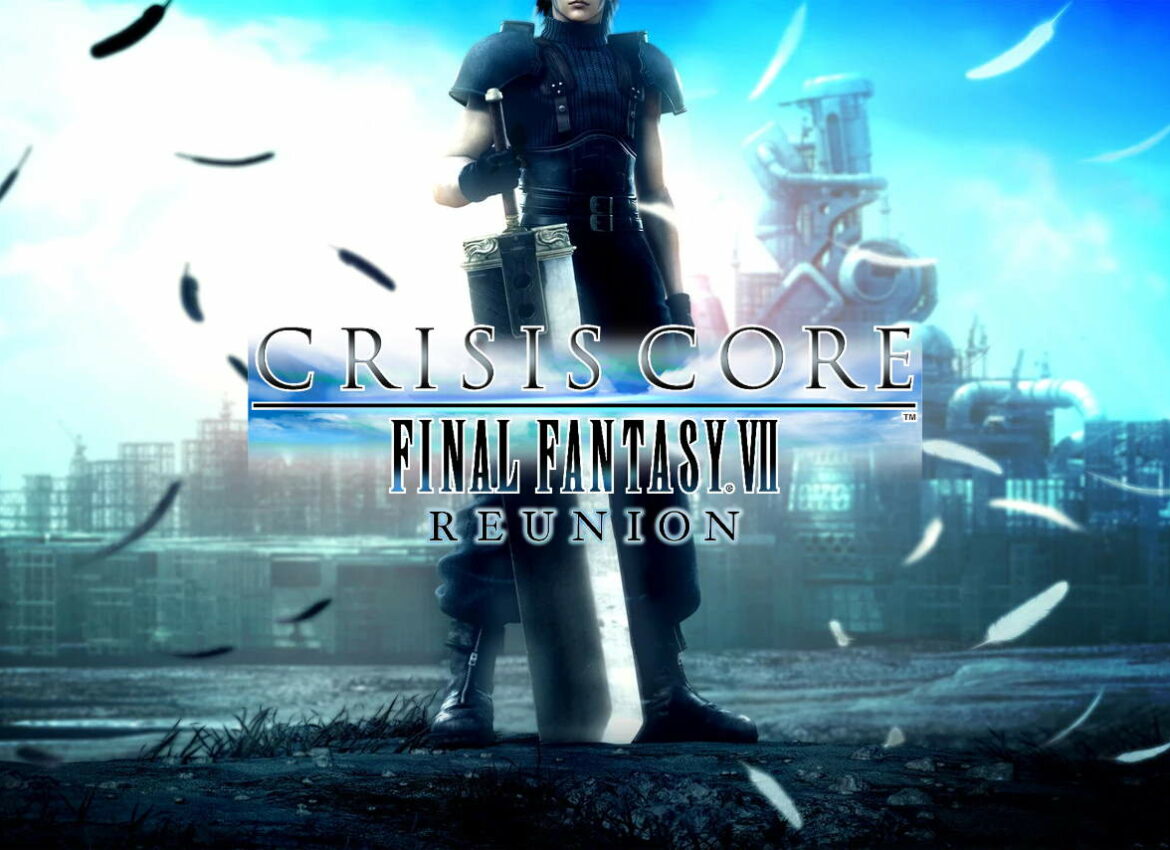 Experience the beloved PSP classic for the very first time on a Nintendo console in our Crisis Core: Final Fantasy VII Reunion review.

The year was 1997, the PlayStation was in its infancy, and a new JRPG from Square Enix was about to make history as one of the most influential games of all-time. I’m of course talking about Final Fantasy VII, the ground-breaking JRPG with a lasting impact that would continue even decades after its release. Praised for its gripping industrial sci-fi story and memorable cast of characters, including the infamous Sephiroth (*chorus sings* Se-phi-roth!), FFVII would spawn an entire sub-series including numerous spin-offs, animations, and even a full-length feature film. Final Fantasy VII has just celebrated its 25th anniversary, and it’s still bigger than ever!

Ten years later, celebrating the series’ 25th anniversary, players were invited back into the sprawling metropolis of Midgar to dive deeper into the compelling history behind the Shinra Corporation through the eyes of a new protagonist. This prequel, named Crisis Core, released exclusively for Sony’s PlayStation Portable to critical acclaim, introducing both new and familiar characters from the world of Mako, magic, and malevolent megacorporations. And if, like myself, you had missed out of the PSP release, you’ve just rolled a 777 with Square Enix’s brand new Crisis Core remake, Reunion, now available on PC and all modern consoles.

So get ready to *ACTIVATE READING MODE* in our Crisis Core: Final Fantasy VII Reunion review.

Set seven years before the events of Final Fantasy VII, Crisis Core begins identically, with a train hurtling towards the mechanical metropolis of Midgar. Aboard the train (quite literally standing atop) is an eager young warrior with spiky hair and an edgy attitude, Zack Fair, SOLDIER 2nd Class. Though unlike Cloud, this protagonist’s goal isn’t to take down the evil Shinra Corporation, but to defend it. And he can only do so alongside his fellow SOLDIER mentor, Angeal, and the revered SOLDIER 1st Class, Sephiroth. Guided under the watchful sword of Angeal, Zack is tasked with his very first mission, with the promise of promotion to 1st Class if successful. While the pair are dispatched to quell an enemy uprising, Angeal mysteriously disappears and Zack is left to defend himself against a horde of clones who have taken on the appearance of fallen Shinra SOLDIERs. Whilst investigating the truth behind the clones, Zack uncovers a previous SOLDIER operative thought to have been killed in action: Genesis. “Use brings about wear, tear, and rust.”

Once a compatriot to Sephiroth and Angeal, Genesis now wants nothing more than to unleash his wrath upon Shinra. Wielding unsurpassed power and an army of viscious clones, Genesis seeks the truth behind Shinra’s experimental “Project G” and vengeance upon all who were involved. It’s up to Zack to unite the remaining forces of Shinra, gather allies from across the continent, and defend his honour as SOLDIER.

At many points throughout, Crisis Core’s story seems incredibly cliché, clearly drawing upon the edgy themes of mid 2000s media. Though this is easily overlooked thanks to its compelling cast of characters, with cameos and appearances from many of Final Fantasy VII’s most memorable heroes and villains. This culminates with one of the most gripping finales of any Final Fantasy game, neatly wrapping up the story of Crisis Core and tying the game directly into the original. Zack even meets quite a few familiar faces along the way.

If you’ve not yet experienced Crisis Core, Zack’s tale will undoubtedly give you far more insight into and appreciation for the Final Fantasy VII universe and its characters.

Originally developed for PSP, Crisis Core Reunion retains much of the same gameplay as its source material. Where most modern JRPGs give the player free reign to explore expansive open worlds, Crisis Core limits its action to smaller locales in order to accommodate the technical limitations of the era.

Throughout the adventure, Zack explores ransacked towns, abandoned reactors, and mysterious Mako-infused caverns, all of which will feel familiar to players who have recently experienced the Final Fantasy VII Remake. These confined and linear settings feel perfectly suited to the Nintendo Switch, with quick load times avoiding any significant interruptions to gameplay. Each area is interspersed with amusing interactions between characters, stylish action-driven cutscenes filled with 2000s visual style, entertaining mini-games, and emotive conversations that drive the story forward. Sephiroth trying his best to keep all his pent up aggression inside.

For those who have already played Crisis Core, you’ll be all too familiar with the three words that stop you at every single moment: ACTIVATING COMBAT MODE. Triggered by random encounters, Crisis Core Reunion blends the fluid and fast-paced action combat of FFVII Remake with Materia wielding and fusing of the PSP original. Taking control of Zack, players can deftly move about the battlefield, dodge and guard attacks, slash away at enemies, and cast powerful Materia spells to dispatch foes.

Turn-based combat is so old-school.

But there’s one important element of combat completely unique to Crisis Core that adds its own unique spin on gameplay: the Digital Mind Wave (DMW). Positioned in the top left corner of the combat screen, this essentially acts as a roulette that lines up three numbers of images to trigger random effects during battle. Depending on the numbers rolled, Zack may obtain a boost to certain stats, increase the power of equipped Materia, or unlock unlimited use of abilities. There’s actually no traditional XP either, as Zack instead gains a level when the DMW rolls a 777. Boss fights are the most thrilling moments of Crisis Core’s combat.

The real excitement of Crisis Core’s combat is when the character images on the DMW align, which triggers Zack’s memories of the character that has been rolled. You’ll be treated to a short interaction between Zack and the character, followed up by a Limit Break, which will be either a powerful attack or a massive stat boost. Further progression during the game adds summons to the DMW, with the ability to bring forth the power of gods at random, or even harness Genesis’ own abilities during combat.

The summon animations are over-the-top and jaw-dropping as always.

This element of randomness through the addition of the DMW keeps Crisis Core feeling fresh and exciting, even when overly frequent random encounters become tiresome. It’s a unique element of gameplay unlike any other presented in a JRPG, and draws elements from numerous games across the series. Coupled with the game’s Materia fusion and levelling system all relying on the outcomes of the DMW, most players will find themselves enjoying this unusual gameplay mechanic.

All footage throughout this review has been captured on Nintendo Switch, which runs at 720p in both docked and handheld modes. Impressively, this port manages to maintain a consistently smooth framerate throughout even the busiest action sequences, with detail and lighting that are among some of the most impressive on Nintendo Switch to date. The game looks its best in handheld mode on the smaller screen, but when stretched onto a large TV highlights the textures and detail on character models that have been reduced to allow the game to run smoothly on Switch. All captured on Nintendo Switch! Why couldn’t Pokémon Scarlet look this good?

Even despite the Switch running at a lower resolution, Crisis Core looks brilliant at almost every moment. Clearly the smaller, segmented design of the environments allows for a greater level of visual polish. For those contemplating whether to purchase the game on another console for visual fidelity, I encourage you to consider the Switch port, simply for its impressive performance and ability to be played on the go as the game was originally intended.

The game’s environments feature impressive lighting and detail for a Nintendo Switch port.

While the legendary Nobuo Uematsu is responsible for creating the critically-acclaimed soundtrack of Final Fantasy VII, the baton was passed onto another composer to add their own talent to Crisis Core. Bringing his distinct rock/hip-hop/electronica style to Crisis Core was Takeharu Ishimoto, the mind behind the phenomenal sounds of The World Ends With You and its sequel, NEO: The World Ends With You.

But rather than attempt to imitate Uematsu’s epic orchestral pieces, Ishimoto takes inspiration from tracks from throughout FFVII, adding his own twist, whilst also creating completely original music for Crisis Core with its own gritty edge. Take a listen to two tracks that have been re-arranged and re-recorded for Reunion, followed by two from the original PSP release:

Aerith’s theme, “A Flower Blooming in the Slums” offers a moment of peace amidst war.

In keeping up with other modern JRPGs, Crisis Core Reunion is now fully voiced, including lines that previously didn’t feature voice acting in the original. Much to the dismay of fans of the PSP game, the same voice cast does not return, instead opting for a brand new cast of voice actors, many of whom have already featured in Final Fantasy VII Remake. Overall, the delivery of certain lines can feel somewhat comical at times, especially coming from Zack’s voice actor, but when the game needs to get emotional, it certainly delivers. For those not fond of the new English voice actors, there’s also the option to swap to the Japanese voice track for a bit of variety.

Aside from Crisis Core Reunion’s main story, which can be completed in approximately 15 hours, there are a total of 300 completely optional side missions to test your combat skills. And while these are purely optional, many will provide you with essential Materia, items, access to secret shops, and powerful summons to aid you throughout the story. 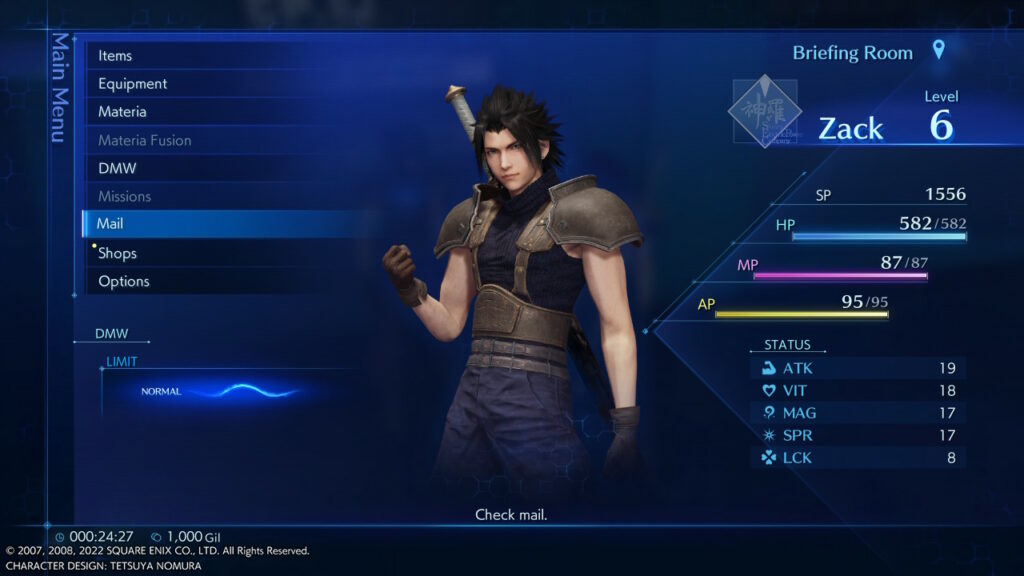 Missions can be accessed through the main menu or any save point throughout the game.

These missions range from simple tasks of eliminating certain enemies or facing off against powerful summons, through to more engaging story-driven missions featuring interactions with characters like Yuffie and Aerith. These provide a considerable amount of additional gameplay and challenge, and while simple are strangely satisfying to complete. The only real downside is completing missions will rapidly level Zack, leaving you overpowered and able to breeze through the main story with no challenge at all. Finish enough missions and you can build Aerith a “cool” new flower cart.

Once the game has been completed, players may return to Midgar in New Game+, with access to all their Materia and DMW, whilst also adjusting the game’s difficulty. There’s little incentive to do this outside of 100% completion, as the game is entirely linear and does not deviate at all during additional playthroughs.

It’s obvious to see why Crisis Core is revered as such a PlayStation Portable classic, and with the game now available to play on all modern consoles, there’s really no excuse not to play it. Returning to Midgar for this thrilling prequel will give newcomers far more of an appreciation for the world of Final Fantasy VII and its characters, while those who have played the PSP original will appreciate the significant improvements in Reunion. Overall, this is a delightful spin-off that should be considered as part of the core Final Fantasy experience.

Want these wings too? Get the best deal of a copy of Crisis Core: Final Fantasy VII Reunion!

A review code for Crisis Core: Final Fantasy VII Reunion on Nintendo Switch was kindly provided by Bandai Namco Australia for the purpose of this review. Looking for another brilliant JRPG spin-off? Then check out our Dragon Quest Treasures review.

Go Gongaga and bust out the buster sword again, because Zack is back!