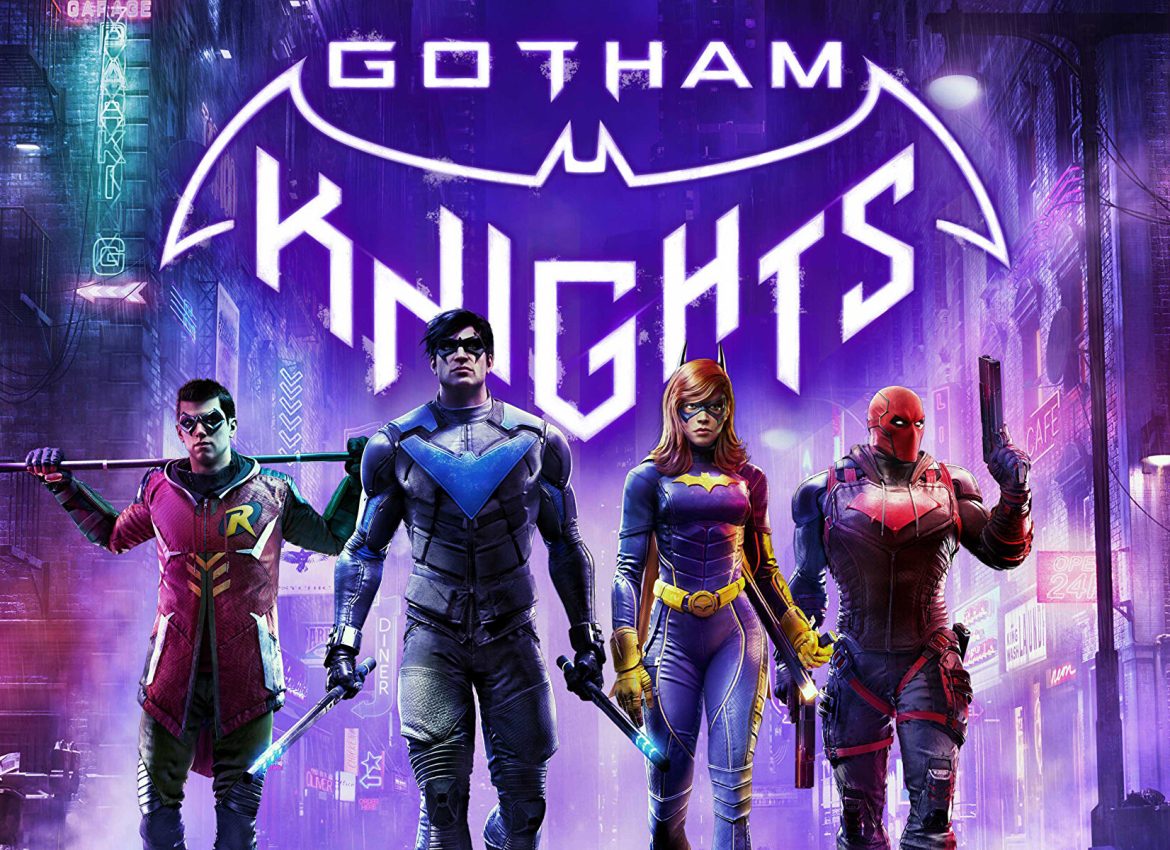 The Bat is dead. So is Jim Gordon. Who serves justice next in Gotham? Find out in our Gotham Knights review.

While Marvel takes the lead with their cinematic universe, DC is still a fundamentally-great comic franchise that has thrived in its animated movies, some great television, and particular prominence in the video game field with the Batman: Arkham series. It’s been seven years since Rocksteady’s Batman: Arkham Knight, and almost ten since Warner Bros. Montreal’s Arkham Origins. The latter studio hasn’t developed a single game since then, so Gotham Knights is a long time coming for fans of Batman games.

Let’s air out the dirty laundry before we dive in, though. Announced in a Discord thread of all places, Gotham Knights is locked to 30 frames per second on new-gen consoles. I’m a fan of high framerates, but can more than compromise so long as the game runs smoothly. This choice was made due to Gotham Knights‘ unique feature: untethered co-op where two players can be on different sides of Gotham’s open-world, doing activities at their own pace. I can confirm that this co-op runs smoothly on PC pre-launch. While it’s disappointing that this was announced in a low-key manner so close to launch, it wouldn’t hinder my enjoyment as the game is poised to still look great and run great on new-gen. Now, is the game worth it past this controversy? Let’s grapple-hook into Gotham and check it out in our Gotham Knights review!

The obvious hook of Gotham Knights is that you aren’t playing the caped crusader, but instead, one of the four proteges that he spent his career training. The introductory cutscene that shows what happened to Bruce Wayne is a visual spectacle that doesn’t downplay his downfall, but showcases his combat expertise and serves as a strong sendoff and a great reel-in to players who’ve just booted up the title. Before Gotham Knights, in the Arkham series, you were able to play Robin in DLC for City and Origins’ multiplayer modes, but otherwise, the four haven’t had this much dedication in video games for a long while (unless you somehow count the Lego Batman series as canon). All four of the playable characters have a rich history with the Bat, with each other, with Alfred, and with the villains of Gotham. Take control of four completely-different characters to prevent Gotham from falling to pieces without Batman.

While I got ample playtime with all four characters, I found myself focusing on Red Hood as my only exposure to Jason Todd was in Arkham Knight as a compelling anti-hero. Further backstory is revealed through interactions at the base of operations, The Belfry, and you learn why Jason Todd is so distant and devastating. While he’s the most physically-intimidating of the four, he does have a soft side for his companions and these dynamics get explored to a desirable extent throughout Gotham Knights instead of being left vague or not fleshed-out. What I loved most was the interactions with Gotham’s rogue gallery of baddies – unique dialogue takes place in several instances of encounters, which really enhances the replayability for diehards that get as engaged with the story and lore as I did. It’s refreshing to actually care about the story in an action game, especially one with a formula like Gotham Knights’.

I was lucky enough to review Marvel’s Avengers when it came out. While the game was lambasted, I found merit in its level design, voice acting, and most of all, its core gameplay. For better and somewhat for worse, Gotham Knights takes inspiration from the Avengers title. While it’s jarring to see numbers pop up every time you strike an enemy and crafting/looting can be a bother, at the end of the day, it’s all about the intense, challenging combat, which there’s heaps of in Gotham Knights. You’re free to be stealthy or go in guns-blazing – but you’ll need to master both to get the most out of Gotham Knights.

You’re tasked with stopping crimes in a Gotham where Batman is gone, so there’s upwards of 10 different crimes to stop every night. Quelling these (with varied optional bonus objectives, such as defeating enemies with the environment or not taking damage) nets you XP and each level-up grants new abilities and passives unique to the character you play. For example, Red Hood can unload his clip to power through a tank’s health, whereas Robin has a passive that silences his footsteps when he runs. Each character also has a unique method of movement they can unlock to move through Gotham; before that, you’ll get around on the Batcycle, which handles fine despite it lacking speed. 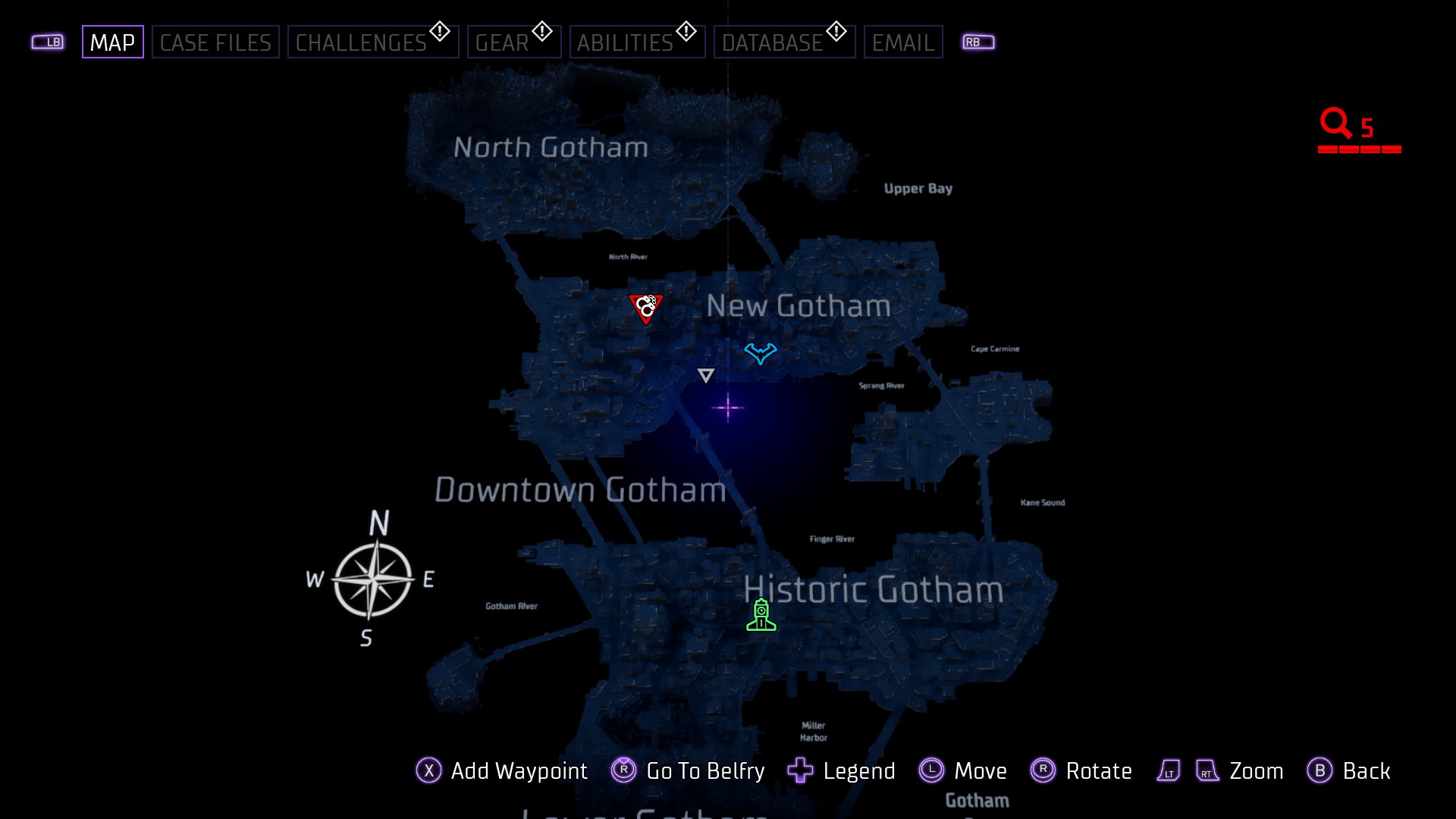 A quick look at the open world – you’ll get new tasks each night, the ability to fast travel, and every corner of it is explored in the main missions.

Finding your favorite character to play as in Gotham Knights is a simple task. There really is a bevy of differences between all four: Batgirl is great for hacking/focusing down one enemy, Robin is the stealthiest, Nightwing is heavily combo-focused, and Red Hood has strong range and utility. While each character caters to a certain playstyle, none of them feel like a hassle to play and offer the player variety in gameplay. Levelling up is universal, so if you play as Red Hood for two/three nights in a row and reach level 10, you can level up Batgirl with as many XP points the next night. The downside to this is that loot is unique to the character for each night, so you’ll have to upgrade your gear progressively, creating an imbalance between power levels. I wish this could be fine-tuned for a more streamlined switch between heroes.

Gotham Knights was reviewed on a PC with a RTX3080 and an i9-9900k; performance was strong across the board. I did notice some frame drops when playing in co-op, but it wasn’t jarring enough to hamper the experience. What I did experience, though, were several crashes during loading screens. This wasn’t too troublesome, either, as rebooting the game took >1 minute and auto-saves put me right back to where I was. For console players, the backlash for a lack of performance mode is undoubtedly heard loud and clear, and I’d be surprised if we didn’t see one come about sometime next year. For PC players, though, performance is admirable and after the crashes get fixed are a welcome surprise as AAA games tend to launch in a messy state. With untethered, drop-in/drop-out co-op, the entire main game can be experienced with friends or strangers.

This game truly has some stellar visuals – not just in Gotham’s skyscrapers, but the character models and their level of detail. It was seriously engaging the first time I choked out a criminal and watched their eyes roll back after having a shocked expression. Fires look realistic, water drips off your character in the rain, and animations are fluid (except for some wonky ledge-grabs and landings). Gotham Knights is particularly-demanding in its system requirements, so if you’re not running with at least a 1660Ti and a 9th-gen i5, you might have to compromise on the scenery.

The sounds of Gotham Knights are as crisp and varied as can be. While I wasn’t huge on the Batcycle’s performance, hearing each individual, girthy rev of the engine with each button press gave me a hearty laugh. I had to double-take when I first heard Penguin, as the talented Elias Toufexis (Adam Jensen) flexed his range in a fantastic performance. In one flashy fight scene after an encounter with Harley Quinn, a polished punk version of a popular song played much to my delight.

Red Hood is literally a blast to play as.

The score of Gotham Knights is modern and appropriate, too, adding to the intensity of combat encounters with bassy backdrops and dropping to a tender orchestral soundscape during personal moments between the crew. Dialogue never made me cringe quite like it did in Avengers – it felt natural and engaging with no-one phoning it in for their lines.

Not everyone is going to love Gotham Knights – it caters to an audience, but is so tailor-made for those individuals that it’s a worthwhile game. For those that love DC, powering through open-worlds, and have fond memories of the Arkham series, Gotham Knights is going to be a blast. I was glued to my screen just about the whole time, and can’t imagine how much more fun this would be if I had someone to blaze through the entire campaign with.

I’d appreciate more transparency from the developer, as the 30fps announcement has already blemished the launch of the game for many, but having spent as much time as I did with it, I can report that the aforementioned crowd looking forward to it won’t be disappointed. Regardless, $70 may be too steep for some – especially knowing that this game will likely plummet in price in months, if current sale trends continue.

A review code was provided courtesy of Plaion and Warner Bros. for the purpose of this review. Enjoyed this review? You can check out more of our reviews here.

Gotham Knights takes the Arkham series and plunges it into the Avengers formula. Does it work this time around? Check out Mike's review for the details!