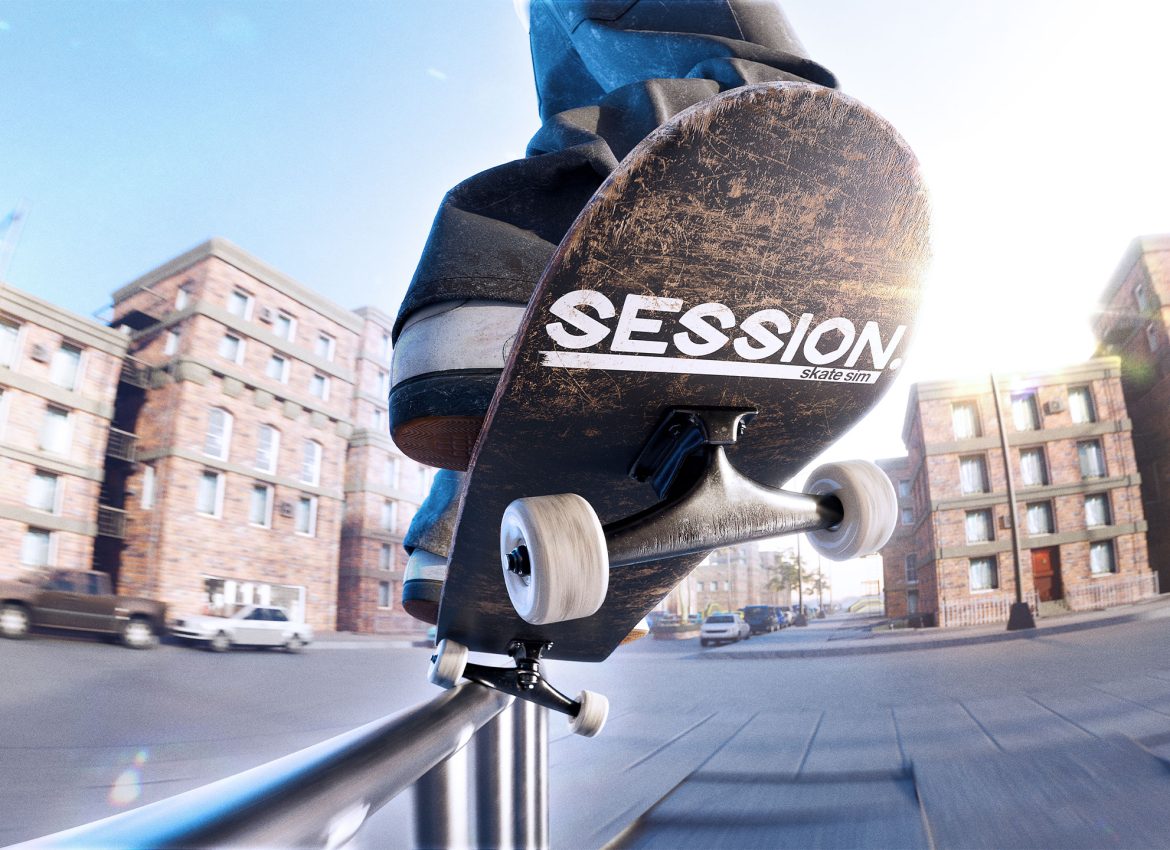 A skateboarding game as tough as skating in real life? Drop into our Session: Skate Sim review.

It’s been twelve years since Skate 3 released. While a new one is in development, the series has sat dormant for a decade. While the skateboarding genre is far from dead, as the Tony Hawk games are slowly-but-surely receiving faithful remasters and the Qualbert team have been enjoying the side-scrolling Olli Olli franchise, the realistic side of boarding titles has been barren. So when Session took shape in 2017, funding its Kickstarter in a mere three days, the cult fans of the Skate series showed just how much they wanted more. It’s been a long five years from the initial demo for Session to its name change to include Skate Sim as it neared its September 2022 1.0 launch. Developer creat-ure Studios secured a publisher in Nacon, who has been reputable for being the premier publisher for less-popular sports like monster trucking, volleyballing, and cycling. Where AAA games have a strict deadline, indie titles like Session: Skate Sim have breathing room to see their vision realized – five years is a longer development time than most games get, so one would expect some real fine-tuned polish, right? Let’s vert transfer into our Session: Skate Sim review and see how it fares! This creepy, colorless man does have some funny wisecracks to offer in your lengthy tutorial in Session: Skate Sim.

The bread and butter of Session: Skate Sim is its realism in skateboarding. As someone who struggled for an embarrassingly-long time to manage even an ollie as a kid, learning how to do one with fluidity is a challenge in and of itself in video game form, as well. In a Tony Hawk game, you press a button to elevate your skater. In Session: Skate Sim, you need to hold down the right stick and flick the left stick upwards. Alone, that doesn’t sound intimidating, but imagine doing that after gaining speed with one button, steering your board with the sticks, and ensuring you stick the landing. That’s before even thinking about adding a flip or a grab into the equation. Ultimately, you can get your bearings with the controls – but there’s three different schemes with increasing difficulty to maximize “control” over your board. Check out the control scheme below and try to make heads or tails of it. And remember: Session: Skate Sim isn’t playable without a controller; not just unoptimized, but not even playable. 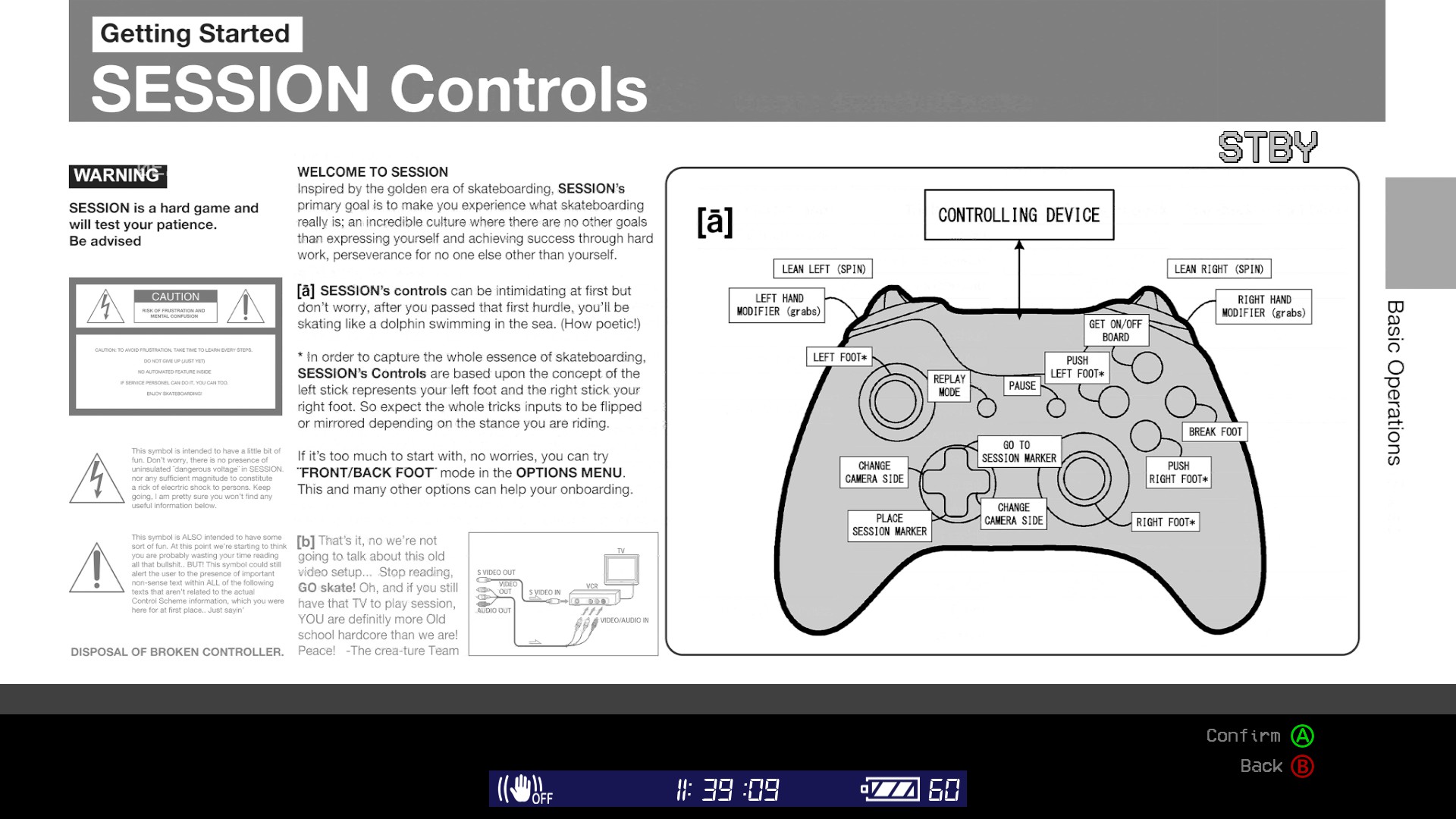 When your controller layout starts talking about feet, you should be worried.

When it clicks, though, Session: Skate Sim feels outstanding. Sure, I was doing 900’s in minutes after picking Tony Hawk’s Pro Skater 1&2 and that felt great, but I felt even more accomplishment overcoming the learning curve in Session and clearing a staircase, transitioning into a boardslide on a bench, and finishing it off with a manual. It’s that sense of challenge that will deter those looking for a hand-hold experience, and will reward those ready to dedicate time into learning the game’s nuances. When you don’t land a trick in Session: Skate Sim, it’s no fault of the game – it’s because you did something wrong. Luckily, like its source material in Skate, you can set up “sessions” and retry with the click of a button. Session: Skate Sim has three real-life locales to skate through: Black Hubbas and Brooklyn Banks in New York City, and FDR Park in San Francisco. You’ll see them all through the lens of your character’s bottom half, as the camera hones in on the skateboard itself as the focus of the game. There aren’t ramps strewn about like in Tony Hawk – it’s a street-focused game, and you’ll traverse them without the worry of moving cars and pedestrians in the way. The graphics are excellent and easy to get immersed into, as the realistic vibe is nailed. Unfortunately, the character models are insulting, as seen in the screenshot above, and the character creator is about as barebones as it gets. You can travel to certain spots with >1 second load times with a bus system in Session: Skate Sim.

I’m glad to say the soundtrack in Session: Skate Sim is stellar. It’s got a genre spread of rap, skate punk, stoner rock, hardcore, and even chillwave. Skating games have a very particular niche when it comes to the music to serve as the background for the extreme sport. A lot of us growing up discovered a ton of great music through Tony Hawk and Skate, so Session following suit is a godsend. Most of the bands in the soundtrack are sitting at about 100 monthly listeners on Spotify – a true personification of “underground music” and hidden gems that will undoubtedly convert some players into fans. Past its banging tunes, the rolling of wheels and distinct ollie sound is as real as one could be, another great addition to Session‘s ability to immerse you into your skate line. There’s no voice acting, which could have enhanced the game’s comedic tone, but it’s nothing past a nitpick.

Session: Skate Sim is the Dark So- I’m not going to use that analogy, but I will say it is a game where you will fall tons of times before you nail the landing. Hell – I was legitimately holding my controller sideways half the time to best pedal and steer. But, like most difficult games, when you finally get the hang of it, it’s a rewarding experience like no other in its genre. Skate fans have been foaming at the teeth for more content, and this is exactly what they’re looking for. Session: Skate Sim is certainly a game where you have to make your own fun, where you have to experiment and tinker, but those looking to delve in and give it a lot of time to learn the intricacies will find a fantastic experience waiting for them.

A press key for Session: Skate Sim was provided by Nacon for the purpose of our review.
Want to check out another great skating game? Read our review for OlliOlli: World and the newly added Void Riders DLC.

Skate is in Session! But does it stick the landing? See the details in Mike's review!