Tactics Ogre was originally released in 1995 for the Super Famicom by Quest (who Square later acquired), and received a massive overhaul in 2010 for the Play Station Portable. It’s been 12 years since then, and a new generation of consoles demands another touch-up.

For fans of the Strategy RPG genre, this year’s release of The DioField Chronicle by Square Enix was an unfortunate disappointment. Its real-time tactical battle system lacked depth, and the plot was half-baked. Square’s remaster of Tactics Ogre (based on the 2010 updated PSP version titled Tactics Ogre: ‘Let Us Cling Together’), re-titled Tactics Ogre: Reborn, absolutely blows The DioField Chronicle out of the water in every respect. This is a game to absolutely buy on release day, and its tag-line ‘crown jewel of the tactical role-playing genre’ isn’t just hyperbole.

Tactics Ogre: Reborn is a plot-heavy game that requires you to think. You’ll find no mashing of buttons here.

“Behold the Valerian Isles, jewels of the Obero Sea. Long a center of naval commerce, the people here have struggled throughout history for dominion over these shores.”
— The Prologue

An archipelago named Valeria was constantly involved in heated civil conflict, until it was unified by Dorgalua, known as the Dynast-King, and knew a measure of peace. After Dorgalua’s death with no direct line of succession, three main ethnic groups in Valeria – The Bakram, Galgastani, and Walister, once again descend into war. 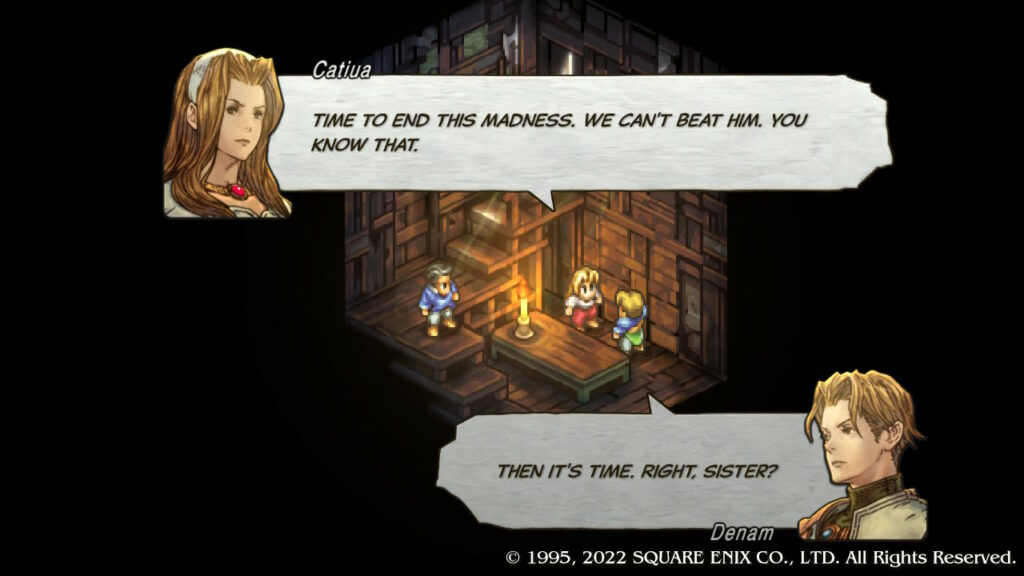 The Galgastani call a blood war, and gain victory. The weaker Walister people are persecuted and restricted to a small province to eke out a living. A small band of Walister youths in the port town of Golyat−Deniam Pavel, his sister Catiua, and his childhood friend Vyce Bozeck rescue Duke Juda Ronwey, the leader of the Walister resistance, and join their cause.

From this jumping off point, the story eventually reaches branching paths based on key decisions you’ve made. This is just a quick summary of the plot, but it’s complex and dense, focusing on themes of ethnic nationalism, political backstabbing, serious war atrocities and class struggle. Yasumi Matsuno focused his writing less on a clear-cut supernatural fantasy, and more on grounded political in-fighting with no clear good and evil, using Ancient Rome and the Middle Ages as inspiration. The translation is superb, headed by the legendary Alexander O. Smith, striking a high-flown Shakespearean tone without descending into purple prose. O. Smith was also responsible for the localization of Final Fantasy 12, in which voice actors were poached from British theatre to give it a more grounded feel.

The use of Tarot is a recurring theme throughout Tactics Ogre.

That same flair for realism is definitely felt here, with the voice acting emotive, yet subtle. The art is done by Akihiko Yoshida, who also worked on Final Fantasy Tactics, which had a slightly more cartoony aesthetic, the faces rounder, eyes larger, bodies more blocky. The style used for Tactics Ogre: Reborn is more adult and sleek, with the characters having more realistic proportions and detail. But why remaster a remake?

Yasumi Matsuno is best known for heading Final Fantasy Tactics (1997) and Final Fantasy 12 (2006). Final Fantasy Tactics in particular is brain-bustlingly popular for the strategy RPG crowd, being seen as a spiritual successor to Tactics Ogre. FF Tactics has always seemed to overshadow Tactics Ogre in popularity, but I think this remaster might just turn the tide. Matsuno was heavily involved in the Reborn remaster. The team was inspired by the original PSP remaster Let Us Cling Together in 2010, as well as more recently, the upgraded version of Final Fantasy 12, titled The Zodiac Age, released more recently in 2017. ‘He’s kind of seeing the whole width and breadth of the entire game and checking everything, offering feedback.’ – Hiroaki Kato

The game is staged with Denam on the world map, you leading him to battle around Valeria’s castles and towns. The actual battles are shown on an isometric grid, with turn based combat similar to a chess match. You prune and grow a little army to deploy across the board. Many factors affect the tide of battle, such as skills, finishing moves weather, character classes, buffs and debuffs etc. It has a ton of depth and is a lot of fun to hack through. (Yes, yes, I know you’re probably tired of the Game of Thrones-style cutthroat political fantasy over-saturating our media by now. It’s really worth it this time!)

So what new upgrades have been added to this remaster? Besides the visually crisp HD bump up, new skills have been added to various classes, such as a pincer attack. The AI has also moved up a notch in intelligence, now taking into account the terrain of the battle areas, as well as player movements to pick the best point to engage in combat with the player. Random Buff Cards also now spawn on the battlefield, that give you buffs that last for the duration of the fight. Trajectory prediction is also a welcome addition, as it tells you if a spell, arrow etc will hit a target without hitting your own units.

Trajectory prediction saved me a lot of heartache folks!

Also, once a unit’s HP falls to 0, the unit doesn’t immediately die, but becomes incapacitated for three turns, and can be restored to life. If the three turns pass without a revival, they’re permanently dead. And random encounters on the world map have become a thing of the past.

If you’re curious, Square Enix has outlined here and here a much more full overview of the changes. All these tweaks make for such a smoother experience, it felt like playing through butter (don’t…try to imagine that too hard). As the game got harder in the later stages, I felt much more quipped by these changes to succeed, without having it’s challenged stripped away. (Far from it, that enemy AI will haunt my nightmares for a long time). 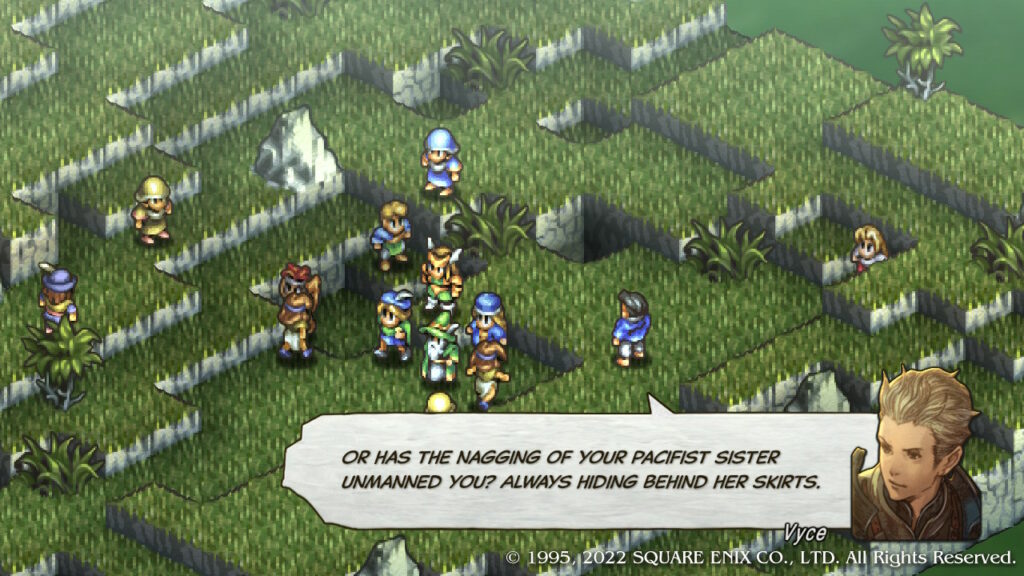 Even in the bleakest times, characters still have a sense of humour.

Please buy this game. It’s so worth it if you’re even vaguely interested in strategy RPGs, a treat for newcomers to the genre and veterans alike. I can’t recommend it enough to anybody who owns a PlayStation 5, PlayStation 4, Nintendo Switch, or PC and is eager to explore this brilliant RPG sub-genre.

A review code for Tactics Ogre: Reborn on Nintendo Switch was kindly provided by the publisher for the purpose of this review. Enjoyed our review? Be sure to check out some of our other tactics reviews like LIVE A LIVE and the brilliant Triangle Strategy.

Experience the crown jewel of tactical RPGs once again in Tactics Ogre: Reborn.