Now that that’s out of the way, welcome to our One Piece Odyssey review, the latest game based on the best-selling manga by author Eiichiro Oda, One Piece. There’s no denying that One Piece has been a force of nature in the anime and manga industry since its release in 1997. It’s truly earned its title as one of the Big 3, a collection of 3 long running titles serialised in Shueisha’s manga magazine Weekly Shōnen Jump. Developed by ICLA (Pokémon Brilliant Diamond and Shining Pearl) and published by Bandai Namco, One Piece Odyssey features an original story to tie in with the 25th anniversary celebration of the series. Read on to find out how One Piece Odyssey fits into the long running story. Let’s go!

For those unfamiliar with the story of One Piece, we follow our main protagonist, Monkey D. Luffy, as he searches for The One Piece, a treasure left somewhere in The Grand Line. By finding the treasure, Luffy believes he’ll inherit the title of “King of The Pirates”. You would think after over 1050 chapters and almost as many anime episodes, 15 animated movies and a live action series currently in the works, you’d think the treasure would have been found already. Nope, still no One Piece here.

Odyssey’s story finds Luffy and his 8 crew members, dubbed The Straw Hat Pirates, crash landing on the remote island of Waford, a mysterious island full of curious creatures, frozen lightning and pillars of light. The moment you load up the game you’re treated to a cut scene introducing you to the members of the crew as they battle through a harsh storm of ice and lightning, only to crash land just off the coast of the island.

As you begin to explore the island to locate your scattered crew, you’ll be introduced to 2 new characters created by Oda himself for this game. Adio, a joyous tattooed man with a mysterious past, and Lim, a young girl with a disdain for pirates and a power that will throw The Straw Hat Pirates for a loop. Along the way, the crew will lose their powers as they try to learn more about the mysterious island they’re marooned on. The journey to get their powers back will be long and arduous as they relive memories of their past adventures. Her distaste for the pirates is hardly subLIMinal.

One Piece Odyssey will see the crew return to their adventures in Alabasta, Water Seven, Marineford and Dressrosa. Though things may not be what they seem, after all, you can only remember so much and what you do remember may be different to how it really happened. Odyssey also has the distinct achievement of having its original source’s creator on the team. That’s right, Oda himself had a guiding hand in how the game was made and the story beats that were focused on. From the new characters, the setting and the writing, Oda watched over it all. The game also features the original Japanese voice cast so each character sounds exactly as they do in the anime.

The gameplay of Odyssey is split into 2 major sections, the overworld exploration and combat encounters.

Overworld exploration is exactly what it says on the tin. You take command as one of the crew members to explore the world around you, being able to swap between each member when their unique talents are required. As Luffy ate the Gomu Gomu no Mi (or Gum Gum fruit in English), he’s able to stretch his limbs and body as if they were made of rubber, able to grapple up to out of reach places to move around the terrain. Luffy is also able to use observation Haki, an ability that lets him see hidden items scattered around, though this only has a limited range so be sure to use it often.

Skills of The Straw Hat Crew

First mate of the crew, and badass swordsman, Roronoa Zoro, is able to use his absurd strength to cut down iron doors and boxes which will open the way to otherwise obscured paths. While the crew’s navigator, Nami, being the thief she is, is able to sense and find hidden piles of cash. The ship’s sniper, Usopp, is able to use his trusty slingshot to shoot down containers that
contain useful items.

Sanji, the cook of the ship, is able to use his Cook’s Nose to sniff out fresh and rare ingredients for cooking. The doctor of the crew, Tony Tony Chopper, isn’t just able to heal his allies in battle. In the overworld, this adorable bipedal, talking, blue-nosed reindeer is able to use his small stature to fit through narrow and low passages. Being the archaeologist of the crew (yes that is her job title), Nico Robin, is able to use her vast knowledge to uncover information about the game world and story of Odyssey. Say hello to the crew!

Franky, the cyborg shipwright of the crew, can use gathered items to make a bridge to areas that were previously inaccessible, giving the game a vague metroidvania-esc feel to it. And the final member of the crew in the game is Brook, the skeletal musician of the crew. Not much is currently known about his role in the exploration of the game, except he won’t join you for a little while. At least not until he gets his body back. And yes I did say final, sorry Jinbe fans, maybe next time you can roam around with your favourite fish-man.

Now as you roam around the overworld, picking up items and taking on quests, you will eventually run into an enemy or creature that thought you looked at them funny. Upon touching the enemy in question, you’ll be transported to a battle stage where you and the crew can take turns beating on the enemy. Yes that’s right folks, unlike the typical anime tie-in game we get nowadays where the game plan is “button mash until the enemy is dead“, One Piece Odyssey takes a page from classic RPGs like Final Fantasy and Dragon Quest. 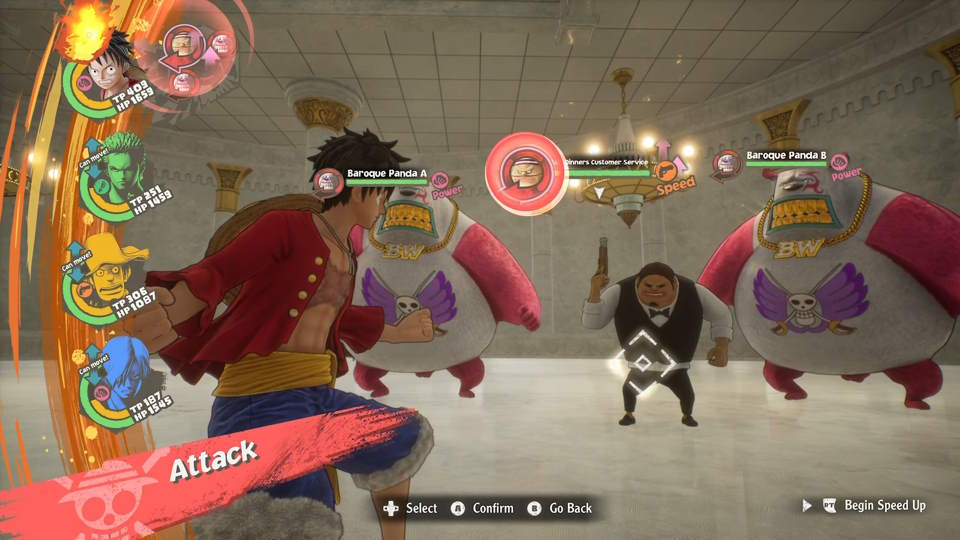 Must be Final FantaSEA, amirite?

Much like these classic RPGs, you will come across multiple random encounters that will transport you to a combat stage where you will fight using turn-based combat. The similarities don’t stop there either. Much like how you have the triangle strategy of weapons in the Fire Emblem games, One Piece Odyssey uses a very similar strategy. There are three combat styles; power, speed and
technique. Power beats speed, speed beats technique and technique beats power. Be sure to use the right crew member for the right fight, but thankfully you can swap members as needed
in battle. I don’t remember there being guns in Fire Emblem…

Along with basic attacks, there’s a couple of other ways to deal damage. Each crew member has their own special skills; these can be multi target attacks, attacks that can hit enemies in a different zone, attacks that can cause a status ailment or even Chopper’s healing abilities. The trade off is that these use Tension Points (or TP for short) – think of TP as your mana from other games. Each crew member only has a certain amount they can use before they’re out. However, using normal attacks will help restore your TP over time.

Finally there are Bond Arts. As you progress through the story, your crew will grow closer and stronger together, eventually you’ll be able to use a tag team attack that will deal significantly more damage to an enemy.

Before we move on from gameplay, there’s one last thing to touch on and that’s your camp-site. As you roam, you’ll come across areas where you can set up camp and this is where all your item gathering comes in handy. When you set up camp, you’ll be able to talk to Usopp, Sanji and Robin. Usopp is able to create trick balls, items that can be used to lower the stats of enemies. Sanji is
able to cook up food using the ingredients found, this food can be used in battle to buff and heal your allies. Finally, Robin is able to combine equipment together to create stronger variants that will give more permanent buffs to your characters. Once you’re satisfied with all your crafting, there’s only one thing left to do: PARTY! By throwing a party, you progress to the next day and all your crew members will fully heal and will be ready to start a new day.

The graphics for One Piece Odyssey are beautiful. There’s really no other way to say it. Sure it may not give off the realistic feel of other games, but it’s not trying to be realistic. Being a game based on an anime, you can expect that cartoony feel to it. Even still, the landscapes are all so vibrant no matter where you are. From the forests and beaches of Waford, to the deserts of Alabasta, to the city of Water Seven, everything just feels so alive. 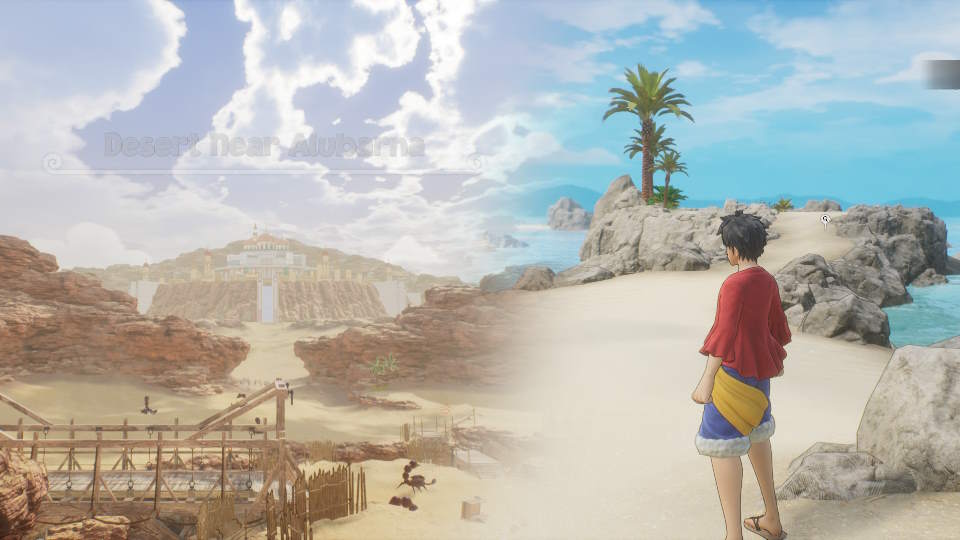 The same can be said for the sound design. I found I never got tired of any of the music. Between the atmospheric and uplifting music in the background as you travel around, and the harsh tonal change as you entered combat, there wasn’t a moment when I wanted to turn it down.

Are There Any Bugs?

Unfortunately, or rather fortunately, the title of this section is a bit misleading, as in my gameplay I found zero bugs to squash outside any of the insectoid enemies. The game is polished to a brilliant shine and I encountered no bugs or glitches of any kind.

One Piece Odyssey is a stunningly brilliant game that’s full of charm, put together with love and a guiding hand from the series creator himself. Odyssey is the perfect game for any long time One Piece fans and even perfect for those looking for a new game with a classic RPG feel to it. The characters are wonderfully portrayed, the story is interesting and the gameplay is wonderfully pieced together. The overworld is full of colourful scenery while the combat is fast-paced and well balanced. You can see how much love, care and planning went into the game as a whole and it’s one I can see myself playing for quite a while to come.

So, why should you dig up this treasure?

A review code on Xbox Series X was kindly provided by Bandai Namco Australia for the purpose of our One Piece Odyssey review. If you enjoyed this review, be sure to check out more of our reviews and join the discussion on our social media!

Yo! Here's how the story goes we find out, 'bout the treasure in The Grand Line, there's no doubt.